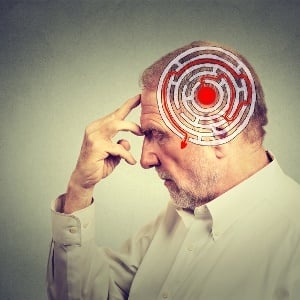 The causes of Alzheimer’s disease are not fully known and scientists continue to investigate this area.  Increased production of a protein fragment called beta-amyloid has been associated with the illness.  These fragments tend to form clumps that are toxic to surrounding brain cells.

Genetic studies have shed new light on genes that increase one’s vulnerability. However, in most cases, the genetic contribution in causing Alzheimer’s is polygenetic i.e. many genes of small effect, rather than a single gene of massive effect.

Possible contributing factors in Alzheimer’s include:

Microscopic study of the brain of a person who has died from Alzheimer’s disease reveals tangled nerve cell fibres in certain areas of the brain. (Nerve cell fibres are typically found inside nerve cells.) As the nerve fibres become tangled, protein deposits called plaques build up in the affected tissue. A protein called tau is found in the tangles.

These patches are situated outside the nerve cells and are surrounded by dying neurons (nerve cells). The plaques contain a sticky protein, beta amyloid, which causes malfunctioning of nerve cells, eventually resulting in these cells dying.

The plaques are made of amyloid precursor protein (APP) molecules, which are usually essential components of the brain. Plaques are formed when an enzyme takes APP apart at a specific location and leaves the fragments (beta amyloid) in brain tissue, where they deposit abnormally. The presence of neuritic plaques may be linked to a reduction in acetylcholine, an important chemical involved in relaying messages in the brain.

The association between Down syndrome and Alzheimer's disease has led scientists to investigate genetic factors on chromosome 21, the chromosome involved in Down syndrome. Chromosomes are found in each cell in the body and carry the hereditary information (genes).

Scientists have also studied other chromosomes in relation to Alzheimer’s disease, specifically 14 and 19. Research on chromosome 19 is the most significant as scientists have discovered the ApoE-e4 gene. This well-known marker for heart disease is commonly found in people who developed Alzheimer's disease at age 65 years or older.

The average duration of the illness is six to eight years, but it can run its course in just a few months or take as long as 20 years.

How is Alzheimer's disease treated?

How can Alzheimer's disease be prevented?