All that social media may boost loneliness, not banish it 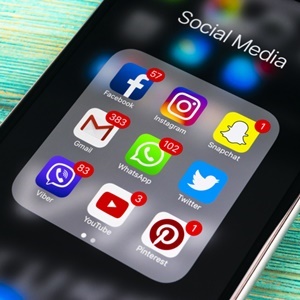 Spending too much time on Facebook, Snapchat and Instagram may actually increase the risk of depression and loneliness.

For the billions of young people who seek community and connection on social media, new research warns their search may be in vain.

Instead, spending too much time on Facebook, Snapchat and Instagram may actually increase the risk of depression and loneliness.

So concludes a small analysis that tracked the impact such sites had on the mental health of 143 users between the ages of 18 and 22.

Over the course of a week, some participants were told to use the sites as often as they normally would, which typically came to about an hour a day. Others were asked to limit their usage to just 10 minutes a day per site, amounting to a total of about 25 minutes per day.

The result? "Ours is the first study to establish that reducing social media use actually causes reductions in depression," said study author Melissa Hunt. She is the associate director of clinical training in the department of psychology at the University of Pennsylvania.

"The main finding of the paper is that limiting your use of Facebook, Snapchat and Instagram to 30 minutes total or less per day results in reductions in depression and loneliness, especially for people who were moderately depressed to start with," Hunt said.

"Our study cannot speak directly to why this happens," she stressed. "But prior research strongly suggests that negative social comparison – my life is worse than other people's lives – and feeling left out of activities and experiences shared by others probably explains a lot of it."

The study team noted that 78% of Americans aged 18 to 24 use Snapchat, while more than seven in 10 young adults use Instagram.

Meanwhile, nearly as many American adults have a Facebook account (68%), and three-quarters of those say they use it every day.

All of the participants were UPenn undergraduates (108 women and 35 men) enrolled in psychology courses. All had an iPhone already loaded with all three site apps.

Participants first completed a pre-experiment survey to assess their feelings of anxiety, depression, loneliness, fear of missing out (FOMO), sense of social support, sense of self-esteem, and perceptions regarding self-acceptance and autonomy.

Fear of missing out

After tracking each participant's normal use of all three sites for a week, the team observed that, for the most part, those struggling with greater mental "distress" did not typically spend more time on social media.

However, those who struggled with FOMO were the exception; they did tend to spend more time using social media.

The study participants were then randomly assigned to either unlimited or restricted access for a second week, after which mental health was re-assessed.

The results suggested that restricting social media use had a "significant" and beneficial impact by reducing depressive symptoms, especially among those who had been moderately or highly depressed. Time restrictions also reduced feelings of loneliness.

But the restrictions had no impact on feelings of social support, self-esteem or one's overall sense of well-being. Whether the findings would also apply to older users remains an open question, the study authors noted.

While not advocating for a total divorce from all social media, the team acknowledged that identifying the perfect sweet spot for ideal usage habits remains elusive.

The findings will be published in the December issue of the Journal of Social and Clinical Psychology.

Dr. Brian Primack is director of the Center for Research on Media, Technology and Health at the University of Pittsburgh.

He described the findings as "important," noting that "because of its experimental design, this study goes an important step further [than prior research] in showing that actively reducing social media use can be helpful."

Primack added that linking a clear mental health benefit to a half-hour of usage per day is a helpful marker.

"However, it is important to note that all social media use is not the same," said Primack. "Thirty minutes of use may be spent connecting with loved ones, or it may focus instead on having aggressive interactions about hot-button issues. So, future research might expand findings like this by exploring different contexts of social media use."

We live in a world where facts and fiction get blurred
In times of uncertainty you need journalism you can trust. For 14 free days, you can have access to a world of in-depth analyses, investigative journalism, top opinions and a range of features. Journalism strengthens democracy. Invest in the future today. Thereafter you will be billed R75 per month. You can cancel anytime and if you cancel within 14 days you won't be billed.
Subscribe to News24
Related Links
Social media posts may hint at depression long before clinical diagnosis
15-year-old girl: ‘I chatted with a stranger who sent nude pictures of himself’
For kids, more screen-time means less happiness.
Next on Health24
Regular cannabis use puts young people at higher risk for self-harm and death, a new study finds