How belly fat increases your risk of diabetes 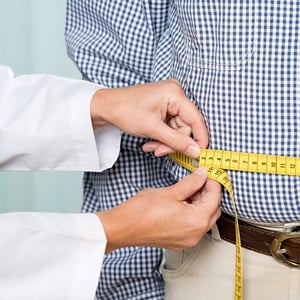 Belly not budging? You might be more at risk for diabetes type 2.

It’s a fact that being overweight or obese increases your risk of chronic diseases, including type 2 diabetes.

Unfortunately this doesn’t necessarily mean that slimmer people are safe. If you have slim legs but carry extra weight around your waist, you could be at higher risk for type 2 diabetes, according to a recent study from the University of Oxford.

It's in the genes

The study found a certain gene that causes some people to have an excess of visceral fat was to blame. Visceral fat is fat surrounding the internal organs, which manifests as a flabby belly.

The gene in question is called KLF14, which was shown to modify the way how fat is stored in the human body – meaning that fat is distributed around the belly rather than the hips, especially in men.

Not all fat is equal

Diabetes.co.uk states that not all fat is equal – where the fat is distributed makes a difference in one's risk for diabetes.

According to Harvard Medical School there are several reasons why abdominal fat is more dangerous than any other fat in the body. It is specifically the fat inside the abdomen, located around the internal organs, that is truly bad for your health.

One of the earlier explanations was that this type of fat was linked to the overreaction of the body’s stress response mechanisms, which would lead to a higher blood pressure, higher blood sugar levels and risk of heart diseases.

How is belly fat linked to diabetes?

However, Harvard Medical School's most recent theory is that the fat closest to the organs releases metabolic products directly into the part of the body that carries blood straight to the liver. This means that these fat cells pour fatty acids into the liver, pancreas, heart and other organs – cells that are not engineered to store fat. This leads to organ dysfunction, causing improper control of insulin, blood sugar and cholesterol, which, in turn, can increase your risk of chronic disease.

Visceral fat increases the risk for type 2 diabetes in the following way: The more insulin is produced, the more glucose is taken up by the liver to store for future use. But if the liver is covered in fatty tissue, it can't respond to the insulin quickly enough.

As a result, your blood sugar accumulates in the blood stream instead of being processed by the liver. This causes damage to organs all over your body. Measure your waist to determine your risk

According to the World Health Organization, studies indicate that the measurement of waist circumference is a better indication of diabetes risk than body mass index – however, it can't be used as the only tool.

Slim down your belly

Luckily, even the slightest efforts to lose weight and cut down the circumference of your belly can lower your risk for type 2 diabetes:

We live in a world where facts and fiction get blurred
In times of uncertainty you need journalism you can trust. For 14 free days, you can have access to a world of in-depth analyses, investigative journalism, top opinions and a range of features. Journalism strengthens democracy. Invest in the future today. Thereafter you will be billed R75 per month. You can cancel anytime and if you cancel within 14 days you won't be billed.
Subscribe to News24
Related Links
When to see your doctor about diabetes
This is why diabetics have a higher risk of going blind
Suffering from diabetes? Take extra care of your teeth
Next on Health24
Belly fat may raise risk of diabetes