The penis is a wondrous contraption! This much we can say without too much exaggeration. Sure, it’s the testicles, the prostate gland and the seminal vesicles that produce the semen, but it’s the remarkable ability of the penis to turn itself from a limply dangling appendage into a stiff and upright member at the drop of a hat (or the sight of some sexy lingerie, more like!) that makes it into the perfect sperm delivery mechanism during sex.

But how does an erection happen? Unfortunately most men know very little about the structure and function of their sexual apparatus. For most of us, unless they have problems in this particular department, it all seems to happen as if by magic. One moment you’re flaccidly minding your own business, the next instant you’re standing to attention.

It all starts in the mind

When a man becomes sexually aroused, for example through touch, sounds, fantasies or what he sees, these stimuli increase the activity and the output of nerve signals from a part of the brain known as the paraventricular nucleus.

The penis contains two cigar-shaped cylindrical tubes filled with spongy tissue, called the corpora cavernosa. The signals from the paraventricular nucleus cause the fibres in the corpora to relax and the arteries that bring blood into them to dilate. At the same time, the veins leading out of the corpora constrict, allowing the corpora to fill with pressurised blood and causing the entire length of the penis to elongate, expand and stiffen until it is erect. The corpora are surrounded by a tough membrane called the tunica which limits the amount the corpora can expand. During an erection the blood flow to the penis increases by about 8-fold. It’s literally a case of blood rushing from other parts of the body - many would suggest predominantly from the head - into the penis. 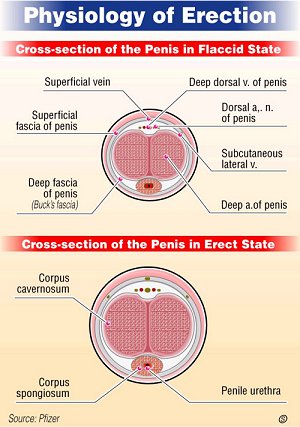 At the moment of orgasm, the signals from the brain normally change very rapidly and dramatically, allowing blood to flow out of the corpora and the erection to subside.

? Penis 101
? How the penis works
? What's wrong with my penis?
? Penis resources
? Penis size per country
? The lowdown on the penis
? The lowdown on your testicles
? Your foreskin
? Erectile Dysfunction (ED)

We live in a world where facts and fiction get blurred
In times of uncertainty you need journalism you can trust. For 14 free days, you can have access to a world of in-depth analyses, investigative journalism, top opinions and a range of features. Journalism strengthens democracy. Invest in the future today. Thereafter you will be billed R75 per month. You can cancel anytime and if you cancel within 14 days you won't be billed.
Subscribe to News24
Next on Health24
Penis traction can work