Penis transplant – what the real focus should be on 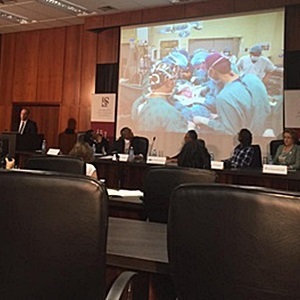 Although South African surgeons achieved a major medical breakthrough in performing the world's first successful penile transplant on a 21-year-old who was forced to have his penis amputated following a traditional circumcision, the focus should be on preventing such incidents from happening, according to Dr Dimitri Erasmus, the chief executive of Tygerberg Hospital.

"I think people mustn't lose sight of the fact that this particular problem should actually not be addressed through such a procedure. It should actually be prevented in the first instance."

Dr Eramus said the hospital has a close relationship with traditional healers and surgeons.

"We give them support in terms of anaesthetic techniques and provision of consumables. We also have arrangements that their patients or their clients can actually be admitted to a provincial hospital where the procedure can be performed and then the individual can return to their cultural issues that go with ritual circumcisions."

The passage to manhood

To some it is the beginning of a new life as it separates the boys from men, but for others it is the journey of no return – or returning without a penis.

According to the Xhosa culture, the month of June traditionally marks the start of a new harvest as boys prepare for the ritual which upon their return will see them as men.

The ritual is known as ukwaluka and has been practiced for years. While the tradition is veiled in secrecy, what is known is that the main process of ukwaluka is the cutting of the penis foreskin that is done by an incibi – a traditional surgeon – which symbolises the beginning of manhood.

It also involves various ceremonies, including teaching new initiates how to build a hut with sticks and grass for themselves to inhabit for about a month, how to respect elders and treat women and how to behave like dignified family men. Throughout this period they are also taught how take care and dress their circumcision wound.

However, every year during the process of initiation deaths are recorded, while experts estimate that as many as 250 males lose their penises. One such person was a 21-year-old male who became the first person in the world to have a successful penile transplant.

For this reason, there is a greater need in South Africa for penile transplants than elsewhere in the world, said Professor Andre van der Merwe, the head of Stellenbosch University's Division of Urology, who led the groundbreaking procedure that was performed at Tygerberg hospital by the University of Stellenbosch's faculty of medicine and health sciences in December 2014.

Three months later and the recipient has a normal functioning penis. "The patient at this stage is already sexually active," said van der Merwe.

A story of hope

He explained that if someone, who is not properly trained, does a ritual circumcision, sometimes buck skin that is tied around the circumcised penis is too tight. As a result, the exertion together with dehydration leads to the penis becoming gangrenous. "A typical defect is where the penis falls off from the body just about a centimetre or a centimetre and a half," he said.

"You can imagine what effect this has on an 18 or 19 year old boy. All of a sudden he is without something which he considers very very valuable," said Van der Merwe. "It is a real big tragedy."

Van der Merwe said he found during his interviews that these adolescents are ostracised and seen as inferior and because they can't cope with it they want to take their own lives. "Some of these patients have expressed ... that if they hadn't heard of this programme, they would have committed suicide."

He pointed out that the recipient was in a hut with somebody who died and nobody ever knew about the guy who passed on.

"There is not a procedure, I think, that creates more hope than this", noted Van der Merwe, who added that nine more people, who all suffered the same fate the first patient, are expected to have penile transplants.

Why you should become an organ donor

Dr Eramus said that once the experimental phase is over, they will engage with the national department of health to look at how this procedure can be performed within the public sector. However, he explained that transplantation programmes and resourcing are focused on life saving transplantations.

He said that renal replacement programmes nationally are under tremendous pressure with a high demand for kidney transplantations.

"So my appeal is, even though this is of something of great significance internationally, the call should still go out for donors to come forward and to donate their organs so that we can in fact give effect to life changing and life saving procedures.

In a passionate plea, he said: "Please come forward, we really do need you to donate your organs."

View: This graph illustrates how the surgeons transplanted the penis Scientists in the US successfully bioengineer human penises

When tradition kills
We live in a world where facts and fiction get blurred
In times of uncertainty you need journalism you can trust. For only R75 per month, you have access to a world of in-depth analyses, investigative journalism, top opinions and a range of features. Journalism strengthens democracy. Invest in the future today.
Subscribe to News24
Related Links
World first: penis successfully transplanted in Cape Town
How the world's first successful penis was transplanted
Penile transplant: Three key takeout points
Next on Health24
Why is my penis skew?

Get the newsletter
Voting Booth
Have you entered our Health of the Nation survey?
Please select an option Oops! Something went wrong, please try again later.
Yes
28% - 9792 votes
No
72% - 24647 votes
Previous Results