Considering the flu shot this year? 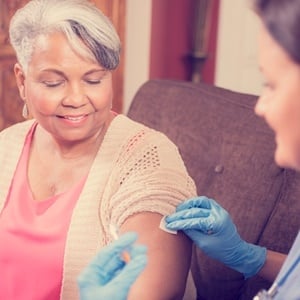 Winter is en route and with it comes the dreaded influenza (flu). Remember? The flu is the cause of you using all your sick leave days last year and kept you from breathing through your nose for quite a while.

It is estimated that more than 6 000 South Africans die of flu related diseases each year.
Perhaps you can avoid the flu this year by opting to go for a flu vaccination. The World Health Organization (WHO) believes that the flu vaccination is the number one way to prevent disease. They encourage all high risk individuals to get their yearly flu vaccination.

• The elderly, 65 years and older
• Children from 6 months to 5 years.
• People who are HIV positive
• Those who are predisposed to medical conditions
• Health care workers or caregivers of children and adults with health conditions
• Pregnant women (during any stage of pregnancy)

How is a flu vaccine made?

According to the Centers for Disease Control and Prevention (CDC) the flu vaccine is created by combining three inactive flu viruses into a cell. The viruses are killed off which renders them inactive and therefore unable to make you sick. There are two ways the flu vaccine is made:

This method is the most common and has been used for more than 70years. However, if you are allergic to eggs you will need to get an alternative flu vaccine.

If you went for the flu vaccination last year you should still prioritise going for it again this year because it is very likely that the flu strains have changed since last year. The flu vaccine gets updated annually so that it is geared for the most prevalent strain predicted for this specific season.

According to the National Institute for Communicable Diseases (NICD) the flu virus strains included in this year’s flu vaccination for South Africa are:

Does the flu ‘shot’ have side effects?

The side effects are not severe at all. After a flu vaccination it could be sore in the area where the injection was given, but this would generally subside after a day or two. You could also experience fever or aching muscles, which would also last for a day or two.

You received the flu vaccination, but still got the flu

There are three possibilities to explain what could have happened. The flu vaccine has 60% efficacy in young healthy adults, and if you still got the flu after receiving a flu vaccination, you could be part of the 40% of people in whom it fails. The second possibility is that you were infected with a flu virus strain not covered by the vaccine. The last possibility is that you most likely don’t have the flu, but are suffering from some other respiratory infection.

SEE: How long the flu virus lasts in your body

How colds and flu can trigger a stroke in your child

We live in a world where facts and fiction get blurred
In times of uncertainty you need journalism you can trust. For only R75 per month, you have access to a world of in-depth analyses, investigative journalism, top opinions and a range of features. Journalism strengthens democracy. Invest in the future today.
Subscribe to News24
Next on Health24
More evidence flu vaccine is safe during pregnancy