Does the flu vaccine cause Guillain-Barré syndrome or not? Guillain-Barré syndrome (GBS) is a pretty scary condition. It starts with weakness and tingling in the extremities and can eventually leading to paralysis. Although most people recover in time, death can occur.

Luckily, it’s a rare disease. It’s thought to result from an autoimmune process in which peripheral nerves are demyelinated and destroyed.

What causes GBS? Infections seem to be a major trigger. In about two-thirds of cases, the syndrome is preceded by either a gastrointestinal or respiratory infection. Campylobacter enteritis seems to be the most common trigger, but influenza, cytomegalovirus, Epstein-Barr virus, and HIV have all been implicated too. It appears that, in rare cases, these pathogens trigger the autoimmune cascade that leads to the diseases.

Read: New findings show the flu virus is more likely to cause GBS

Way back in 1976, researchers noticed something scary. 1976 was the year of the big swine flu epidemic scare. In February of that year, two army recruits at Fort Dix, in New Jersey in the USA, tested positive for swine flu. Researchers believed the strain they were infected with was similar to the one that had caused the 1918 flu pandemic that had killed millions.

When they looked a little harder, they found that hundreds of other recruits at the base had been infected as well. Because these were not folks that had contact with pigs, it meant that the virus was spreading from person to person.

Naturally, people were nervous. The government decided it would produce a vaccine against this strain and vaccinate as many people as possible, in order to head off what it feared might be a terrible pandemic.

Read: Why the 1918 flu spread so rapidly

Something strange happened though. Cases of GBS in people who had received the flu vaccine started cropping up. Hundreds of them.

In 2009, The New York Times ran the story of Janet Kinny, a woman who developed GBS after receiving the shot in 1976. GBS put this young mother in the hospital for a month, paralyzed from the neck down. She recovered, but not everyone was so lucky.

More than 30 of the people who developed GBS after getting a flu shot that year died. Epidemiologists spent a while debating whether or not this cluster was just a coincidence. In the end, most agreed that the shot really was associated with an increased risk of GBS.

Researcher Lawrence Schonberger estimated that people who received the 1976 flu shot were roughly 7 times more likely to develop GBS than people who did not. For every 100,000 people vaccinated, approximately one got GBS.

In December 1976, after having immunised more than 40 million people and failing to see evidence that the H1N1 pandemic was actually going to materialise, US government officials called off the vaccination campaign due to the GBS risk.

Not surprisingly, people became wary of flu vaccines. Nobody wants to get GBS.

A lot of work has been done over the years to try to clarify the risk that flu shots pose, but GBS is such a rare condition that it has been hard to put together studies large enough to shed light on this problem.

Well, this year, three important studies on the flu vaccine and GBS came out. These were huge studies that each looked at millions of people, and they’ve provided a lot of insight into the relationship between vaccines and GBS.

The first study appeared in Clinical Infectious Diseases. The authors mined data collected over 13 years (from 1994–2006) by Kaiser Permanente. Kaiser Permanente is a big insurer/hospital system based in California in the US and has tons of clients. Using records for 3 million of patients, they were able to identify 415 confirmed cases of GBS.

Sure enough, exactly two-thirds of these patients had suffered a respiratory and/or gastrointestinal illness in the 90 days preceding the onset of their GBS. But only 25 had received a vaccine of any kind in the 6 weeks prior to onset.

In this study, GBS was NOT associated with getting a prior flu shot. However, the authors pointed out they could not rule out a very small increased risk of GBS; it’s always possible that with a larger sample size (i.e. more cases) they would have increased power to identify a small association.

Another even larger study appeared in the Lancet Infectious Diseases, and it, too, focused on seasonal flu vaccines. Carried out using the universal health care system records in Ontario, Canada, it was able to identify 2,831 incidents of GBS between the years of 1993 and 2011.

The authors of this study found that the risk of developing GBS was roughly 50% higher in the six weeks following a seasonal flu shot, vs the risk experienced 9–42 weeks after. Thus, there really did seem to be a small, increased risk of GBS associated with seasonal flu shots.

However, the authors found that actually GETTING the flu was a much bigger risk factor for GBS. In the six weeks after seeking medical help for the flu, the risk of GBS was roughly 16 times greater (vs 1.5 times for the shot) than in the weeks following the danger period.

When focusing on this single year, researchers found an increase in GBS cases associated with the vaccine. Of the 23 million people who received the H1N1 vaccine and were included in the study, 54 developed GBS within 6 weeks of the shot.

Read: The H1N1 flu shot is tracked for side effects

This works out to be about 1.6 extra GBS cases for every million people vaccinated. Thus, there WAS a slightly higher risk of GBS linked to the shot–but it was tiny. So tiny, the authors point out, that most studies of seasonal flu vaccines simply wouldn’t be large enough to detect the association. The sample size issue may well explain why the first study (based on the Kaiser Permanente data) did not identify an association between flu vaccines and GBS. 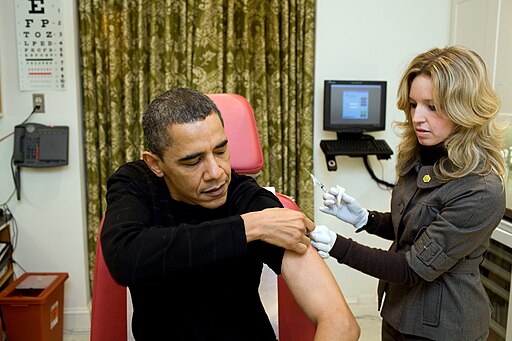 The take-home message: the extremely low risk of vaccine-related GBS is outweighed by the much higher risk of flu complications

So it appears that there is a small risk of GBS associated with flu vaccines. But, as flu researchers have been quick to point out, the risk associated with actually GETTING the flu is much higher.

Poland and colleagues have posed a thought experiment in The Lancet on this subject. They point out that if everyone in the US had gotten the 2009 H1N1 vaccine, it’s estimated that 22 vaccine-related deaths would have occurred.

But it everyone had gotten the H1N1 flu, 12,470 deaths would have occurred. Although the side-effects of a vaccine loom large in our minds, it’s important to put these risks in perspective: most vaccines prevent dangerous diseases, so foregoing a vaccine poses its own (often much greater) risks.

One explanation for the increased GBS risk is that the vaccine was contaminated with a bacterial trigger like Campylobacter.

Another explanation, which seems more plausible, is that something in the vaccine resembled nerve cells–so that when a recipient’s body mounted an attack against the vaccine, the attack might have hurt nerve cells as well.

It would be comforting if, eventually, we could identify the problem.

Flu complications you should watch out for
What is the flu vaccine?
How does the flu virus spread?
What is the difference between flu and a cold?
1918 - how this flu spread through South Africa

Kristin Harper is a freelance science writer and editor interested in how scientific discoveries affect the way we live. She has a PhD in Population Biology, Ecology, and Evolution and an MPH in Global Epidemiology from Emory University in Atlanta, Georgia in the USA. After graduating, she headed to Columbia University, where she was a Robert Wood Johnson Health & Society Scholar for a few years and then a Cancer Epidemiology fellow in the department of Environmental Health Sciences at Columbia University Medical Center. For more of her writing, visit her website Sososcience.

We live in a world where facts and fiction get blurred
In times of uncertainty you need journalism you can trust. For only R75 per month, you have access to a world of in-depth analyses, investigative journalism, top opinions and a range of features. Journalism strengthens democracy. Invest in the future today.
Subscribe to News24
Related Links
Mutating H7N9 bird flu poses pandemic threat
WHO warns of possible flu pandemic
Next on Health24
Too late for new vaccine against mutated flu virus