10% of kids with Cytomegalovirus may end up deaf 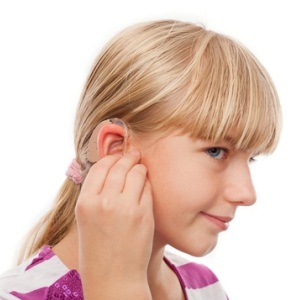 Girl with hearing aid from Shutterstock
More than 10 percent of babies born with an infection called Cytomegalovirus will suffer permanent hearing loss, a new study reports.

But only one in 10 children with the virus show symptoms, and screening is not routine, said study lead researcher Dr. Julie Goderis, of University Hospital Ghent in Belgium.

Cytomegalovirus (CMV) is the most common non-inherited cause of hearing loss in children, responsible in 10 percent to 20 percent of cases, the researchers noted.

"Until a vaccine becomes available, behavioural and educational interventions are the most effective strategy to prevent mothers from being infected with CMV," she said.

Previous research has shown that mothers usually get the virus from toddlers. Once infected, she can pass the infection to the foetus, the researchers said.

"Following-up a child's hearing until the age of 6 years is essential to detect delayed onset or progressive hearing loss from CMV," said Goderis. "We know that, especially in this group, delayed hearing loss can occur."

To identify how widespread the virus is in children, and to determine its toll on hearing, the researchers culled data from 37 previously published studies. Their report was published online in the journal Paediatrics.

Less than one percent

The virus strikes less than 1 percent of new-borns – about 0.58 percent – in developed countries, the investigators found. And about 12.6 percent of infected kids will suffer severe, permanent hearing loss, the research showed.

Among kids who show virus symptoms, one in three children suffer hearing loss, compared to one of 10 who don’t have symptoms, the study authors said.

Hearing loss from CMV, which is severe to total, can develop over time and vary as it progresses, she explained.

To date, there is no cure for the virus. But there is limited treatment with antiviral drugs, said Dr. Darius Kohan, director of otology/neurotology at Lenox Hill Hospital and Manhattan Eye, Ear, and Throat Hospital in New York City.

Kohan thinks that screening babies for the virus should be routine.

"If we would screen newborns for CMV, it would save a lot of headaches down the road," he said.

"Every newborn should get a hearing test before leaving the hospital and every year after until at least 6 years of age," Dave said.

Kids with hearing loss from CMV will need hearing aids. If the hearing loss is complete, then a cochlear implant can be considered, he said.

First identified in 1964, cytomegalovirus can cause brain damage and vision problems in addition to hearing loss, according to the U.S. Centres for Disease Control and Prevention.

Cytomegalovirus is related to the viruses that cause chickenpox and mononucleosis. By age 40, between 50 percent and 80 percent of adults in the United States have had a cytomegalovirus infection, and the virus stays in the body for life, U.S. health officials say.

But a small percentage of women develop the virus in pregnancy, creating problems for some of their offspring.

We live in a world where facts and fiction get blurred
In times of uncertainty you need journalism you can trust. For 14 free days, you can have access to a world of in-depth analyses, investigative journalism, top opinions and a range of features. Journalism strengthens democracy. Invest in the future today. Thereafter you will be billed R75 per month. You can cancel anytime and if you cancel within 14 days you won't be billed.
Subscribe to News24
Next on Health24
Should sign language be an official language in SA?