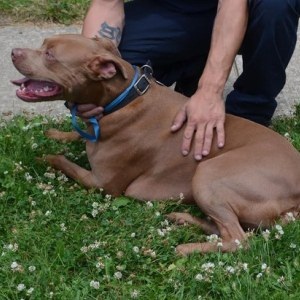 Indianapolis Fire Department
On the afternoon of the 16th of July, a fire broke out in an Indianapolis home. Inside, twelve year old Nick Lamb lay sleeping, unaware of the impending danger.

Nick, who was born deaf, has cochlear implants but had taken his hearing aids out before he took a nap.  Because of this he was unable to hear the smoke alarm going off and would have remained unaware of the fire blazing within his home.

Luckily for Nick, his two-year old pitbull, Ace, came to his rescue by continuing to lick his face until he got up. Nick originally thought Ace was just looking to go outside but realised something more serious was happening when Ace wouldn’t leave him alone.

When Nick eventually got up, he realised the entire house was covered in smoke. He quickly ran out to the back yard, covering his mouth and nose with a t-shirt.

"I woke up and the house was covered with smoke and we ran out in the backyard,” said Nick.

He was given a thorough examination by medics on the scene and released without hospitalisation. Read: Gene therapy may boost the power of cochlear implants


Nick was the only one at home at the time of the incident. His mother, Lindsay Bernard, had only recently decided that he was old enough to stay at home alone. She described the incident as “amazing”, stating that her son would almost certainly not have woken up if it weren’t for Ace.

After searching the house extensively, firemen emerged with the family cat, Pixie, who was unaffected by the blaze.

It is suspected that the fire originated in the garage and was caused by an electrical issue. The house was completely destroyed by the flames.


We live in a world where facts and fiction get blurred
In times of uncertainty you need journalism you can trust. For 14 free days, you can have access to a world of in-depth analyses, investigative journalism, top opinions and a range of features. Journalism strengthens democracy. Invest in the future today. Thereafter you will be billed R75 per month. You can cancel anytime and if you cancel within 14 days you won't be billed.
Subscribe to News24
Next on Health24
The importance of having your baby's hearing tested