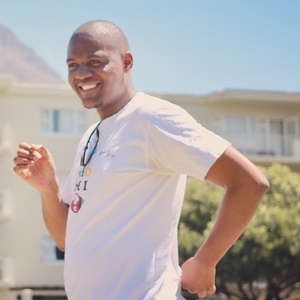 Qobo Ningiza, who is deaf, has faced many obstacles in his life so far. But that has not deterred him – he is on the verge of being capped as South Africa’s first deaf Bachelor of Laws degree graduates at the University of Cape Town.

Ningiza, born and raised in Ntseshe location, Ngqamakhwe District in the Eastern Cape, tells of difficulties during his schooling, where he was at a severe disadvantage – limited resources at schools for the deaf meant that learners had to share textbooks and make do with poor infrastructure.

Coupled with that, learners were not able to choose subjects because of a shortage of teachers, and had to comply with a prescribed list.

It was these early challenges that motivated him to pursue a law qualification – but, even then, the road to a law degree was a bumpy one

Ningiza recalls using public transport to travel the long distance to try and gain entry at a tertiary institution. He, and another student he had befriended, arrived at their destination, but the offices had already closed – so they spent the night sleeping next to a lamp post in the parking lot.

When he finally got the opportunity to be interviewed, he was swiftly told that the particular institution would not be able to provide sign language interpreters, and he was denied entry.

But through UCT's disability service, he has received the necessary assistance to successfully navigate life at university, culminating in becoming a law graduate, and the capping ceremony on April 12. Nzinga, however, is far from done – he is currently pursuing his LLM (Master's) and applying to law firms to serve his articles next year.

But as ever, challenges have arose – a lack of facilities for deaf candidates has meant that firms have, so far, been hesitant to accept him.

“There is nothing I want more than to make a difference in other people’s lives. I believe that we are a country with a lot of potential and that many of our problems would disappear if we focused our energy on assisting those in need,” a hopeful Nzinga said.

We live in a world where facts and fiction get blurred
In times of uncertainty you need journalism you can trust. For only R75 per month, you have access to a world of in-depth analyses, investigative journalism, top opinions and a range of features. Journalism strengthens democracy. Invest in the future today.
Subscribe to News24
Related Links
SEE: 18 tips on speaking to a deaf person
‘I lost my hearing because of TB treatment’
‘Being deaf has shaped who I am’
Next on Health24
Disposable surgical masks best for being heard clearly when speaking, study finds