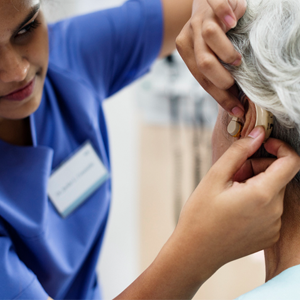 Wearing a hearing aid could slow down ageing.

You won't jump for joy when you're told you need a hearing aid or cataract surgery. But get this: Both appear to slow mental decline in older adults.

"These studies underline just how important it is to overcome the barriers which deny people from accessing hearing and visual aids," researcher Piers Dawes, of the University of Manchester in England, said in a university news release.

"It's not really certain why hearing and visual problems have an impact on cognitive [memory and thinking skill] decline, but I'd guess that isolation, stigma and the resultant lack of physical activity that are linked to hearing and vision problems might have something to do with it," said Dawes, a lecturer in audiology and deafness.

For comparison, the researchers looked at thousands of people who had not had cataract surgery or obtained hearing aids.

The investigators compared the rates of mental decline before and after the patients had their vision and hearing improved. The rate of mental decline was halved after cataract surgery and was 75% lower after starting to use a hearing aid.

Dawes noted that people might not want to wear hearing aids due to stigma, because the amplification is not good enough, or because they're uncomfortable.

"Perhaps a way forward is adult screening to better identify hearing and vision problems and in the case of hearing loss, demedicalising the whole process so treatment is done outside the clinical setting. That could reduce stigma," Dawes suggested.

"Wearable hearing devices are coming on stream nowadays which might also be helpful. They not only assist your hearing, but give you access to the internet and other services," he added.

According to Dawes' colleague, Asri Maharani, "Age is one of the most important factors implicated in cognitive decline. We find that hearing and vision interventions may slow it down and perhaps prevent some cases of dementia, which is exciting – though we can't say yet that this is a causal relationship."

We live in a world where facts and fiction get blurred
In times of uncertainty you need journalism you can trust. For 14 free days, you can have access to a world of in-depth analyses, investigative journalism, top opinions and a range of features. Journalism strengthens democracy. Invest in the future today. Thereafter you will be billed R75 per month. You can cancel anytime and if you cancel within 14 days you won't be billed.
Subscribe to News24
Related Links
When is surgery an option for hearing loss?
Come again? Hearing aids are hip
How to look after your hearing aid
Next on Health24
Disposable surgical masks best for being heard clearly when speaking, study finds