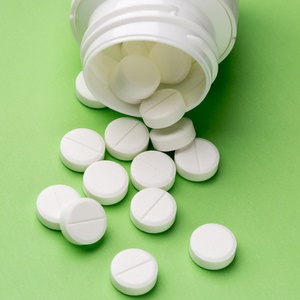 Don't be scared of your aspirin, researchers say.
iStock

Some research has raised concerns about the safety of aspirin for heart failure patients. But a new study appears to offer some reassurance.

The study that involved more than 2 300 patients found that those on daily aspirin were not at heightened risk of being hospitalised for, or dying from, heart failure.

Aspirin is used for the relief of mild to moderate pain, and to reduce fever and inflammation

That has been a concern because, in theory, aspirin could interfere with the benefits of certain heart failure drugs, explained Dr Shunichi Homma, the senior researcher on the study.

Plus, two past studies have linked aspirin use to an increased risk of heart failure complications.

But the new study, which compared aspirin to warfarin, a blood thinner, was larger and longer-term – following patients in 168 centres in 11 countries over 10 years.

"I think this should allay fears that there might be a detrimental effect of prescribing aspirin," said Homma. He is deputy chief of cardiology at New York-Presbyterian/Columbia University Medical Center, in New York City.

Homma and his colleagues reported the findings in JACC: Heart Failure.

Dr Christopher O'Connor is a cardiologist and editor-in-chief of the journal. He agreed that the findings are reassuring. Compared with the earlier, smaller studies, O'Connor said, "This one is probably closer to the truth." O'Connor said he thinks the results have "immediate implications" for heart failure care.

What's the deal with heart failure?

Congestive heart failure (CHF) occurs when the heart is unable to adequately pump blood throughout the body and/or unable to prevent blood from accumulating, or "backing up", into the lungs. This causes symptoms such as fatigue, breathlessness and swelling in the limbs.

Close to six million Americans have heart failure, according to the US Centers for Disease Control and Prevention.

In South Africa 210 people die of heart disease per day.

Often, heart failure is caused by damage to the heart muscle from a heart attack or coronary artery disease. And, in general, those patients should be on aspirin to limit the risk of a first-time or repeat heart attack, O'Connor said.

The link between aspirin and heart failure

The trouble is, there have been concerns that aspirin could interfere with ACE inhibitors or angiotensin receptor blockers (ARBs) – two drug classes that are key in managing heart failure. Those drugs boost compounds called prostaglandins in the blood, whereas aspirin reduces them.

For the new study, Homma's team analysed data from a clinical trial in which heart failure patients were randomly assigned to take either aspirin or warfarin, which is used to prevent blood clots.

Patients in the aspirin group took 325mg per day. Over 10 years, just over 19% of aspirin patients were hospitalised for heart failure, or died of the disease. That compared with just under 23% of warfarin users, the findings showed.

We live in a world where facts and fiction get blurred
In times of uncertainty you need journalism you can trust. For only R75 per month, you have access to a world of in-depth analyses, investigative journalism, top opinions and a range of features. Journalism strengthens democracy. Invest in the future today.
Subscribe to News24
Related Links
Study ties low-dose aspirin to better cancer survival
Gene mutations may cause heart failure in healthy people
Aspirin saves heart
Next on Health24
SEE: This is what a mechanical heart looks like