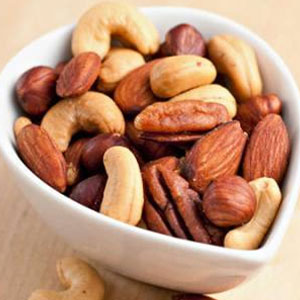 iStock
Eating nuts and acorns may have helped hunter-gatherers survive 15 000 years ago in northern Africa but the practice wreaked havoc on their teeth, researchers said Monday.

Fermented carbohydrates in the nuts caused cavities, tooth decay and bad breath, said the study led by British scientists in the Proceedings of the National Academy of Sciences, a US journal.

The findings offer the earliest evidence of nut harvesting and storage among African hunter-gatherers, and are based on dozens of hole-riddled dental remains found in Morocco's Taforalt Cave.

Dental woes have long been believed to originate in later farming cultures some 10 000 years ago, when people began eating processed foods on a wide scale.

Toothaches were presumed rare among hunter-gatherers. But this research suggests they arose earlier than previously thought by several thousand years.

The study pointed to an "exceptionally high prevalence of caries", or dental disease, found in 51% of teeth among the adult remains.

That is far higher than the rate of tooth decay generally seen in hunter-gatherers, which has ranged from zero to 14%, and much closer to the level seen in prehistoric farmers, said the study.

"The majority of the people's mouths were affected by both cavities in the teeth and abscesses," said co-author Isabelle DeGroote of Liverpool John Moores University.

"They would have suffered from frequent toothache and bad breath."

The latest analysis was done on a total of 52 adults whose remains were found in the 1950s as well as during more recent excavations that were begun in 2003.

Read: What you eat affects your teeth

There were so many remnants of acorns that researchers came to the conclusion that they must have been harvested and stored for eating as a staple food all year long.

"This is the first time we have documented this set of behaviours in the Iberomaurusian," a distant culture that thrived in the Maghreb, said lead author Louise Humphrey of The Natural History Museum of London, in an email to AFP.

"It is the earliest documented evidence of systematic exploitation of wild plant resources in hunter-gatherers from Africa."

Read More:
How to keep your teeth healthy
Carbs can rot your teeth

We live in a world where facts and fiction get blurred
In times of uncertainty you need journalism you can trust. For only R75 per month, you have access to a world of in-depth analyses, investigative journalism, top opinions and a range of features. Journalism strengthens democracy. Invest in the future today.
Subscribe to News24
Next on Health24
How to brush your teeth correctly