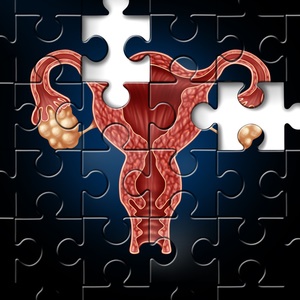 Scientists say they have created a 3D replica of the female reproductive system that even has a period.

Dubbed a menstrual cycle in a dish, the miniature 3-D replica includes human and rodent tissue and models of ovaries, fallopian tubes, the uterus, cervix, vagina and liver.

Menstruation is the periodic discharge of blood and tissue from the lining of the uterus, occurring about every 28 days in women of reproductive age.

The technology could lead to improvements in treating diseases in women's reproductive organs, including cancer and infertility, the model's creators said.

The research is described in a paper published in the journal Nature Communications.

"This is nothing short of a revolutionary technology," lead investigator Teresa Woodruff said.

Woodruff is a reproductive scientist and director of the Women's Health Research Institute at Northwestern University's Feinberg School of Medicine in Chicago.

EVATAR, as it's called, resembles a small cube. A special fluid pumping through all of the organ models performs the function of blood.

Hormones and other secreted substances mimic how they work together in the body.

The technology can be used to test new drugs to see how females process medications differently from males, the scientists said.

It should also add to knowledge about female reproductive tract disorders, such as fibroids – noncancerous uterine growths that affect up to eight in 10 women – and endometriosis, the researchers said. Endometriosis is the condition where tissue that's normally inside the uterus grows outside the uterus.

It may even be possible to use the stem cells of an individual patient to create a personalised model of their reproductive system, Woodruff noted.

"If I had your stem cells and created a heart, liver, lung and an ovary, I could test 10 different drugs at 10 different doses on you and say, 'Here's the drug that will help your Alzheimer's or Parkinson's or diabetes,'" Woodruff said in a university news release.

"It's the ultimate personalised medicine, a model of your body for testing drugs," she added.

Of course, much more research is needed before that becomes a reality. Also, research involving animal tissue isn't always replicated in humans.

Menstruation through the periods

Is your PMS causing your food cravings?

We live in a world where facts and fiction get blurred
In times of uncertainty you need journalism you can trust. For 14 free days, you can have access to a world of in-depth analyses, investigative journalism, top opinions and a range of features. Journalism strengthens democracy. Invest in the future today. Thereafter you will be billed R75 per month. You can cancel anytime and if you cancel within 14 days you won't be billed.
Subscribe to News24
Related Links
Ever wondered why you crave chocolate during PMS?
Why Olympic gymnasts stop getting their periods
Why do some women get 'bad' PMS and others don’t?
Next on Health24
SEE: 6 Myths and facts on PMS