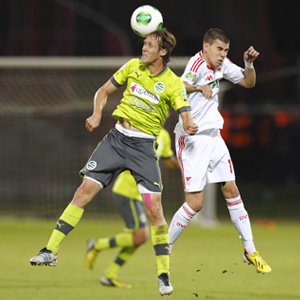 Michal Svec of Gyor heads away the ball during the Hungarian Cup Final.
Laszlo Szirtesi, Shutterstock
Soccer players who 'head' the ball with high frequency demonstrate poorer performance on memory tests and have brain abnormalities similar to those found in traumatic brain injury patients, according to a study published online in the journal Radiology.

"We chose to study soccer players, because soccer is the most popular sport worldwide," said Michael L. Lipton, M.D., Ph.D., associate director of the Gruss Magnetic Resonance Research Center at the Albert Einstein College of Medicine and medical director of MRI at Montefiore Medical Center in New York City. "It is widely played by people of all ages, including children, and there is significant concern that that heading the ball, a key component of soccer, might cause damage to the brain."

Heading, in which players field the soccer ball with their head, is an essential part of the game. Players head the ball, on average, six to 12 times during competitive games, where balls can travel at velocities of 50 miles per hour or more. During practice sessions, heading drills, where the ball is headed repeatedly up to 30 or more times, are commonplace.

Recently, the lasting effects of concussion have received widespread attention and caused growing concern among amateur and professional athletes and organisations involved in several sports. While heading may be a cause of concussion and post-concussive symptoms, studies indicate that this is not common. The clinical significance of sub-concussive heading as a cause of brain injury, however, remains largely unexplored.

"Heading a soccer ball is not an impact of a magnitude that will lacerate nerve fibres in the brain," Dr. Lipton said. "But repetitive heading could set off a cascade of responses that can lead to degeneration of brain cells over time."

Diffusion tensor imaging (DTI), an advanced MRI technique, allows researchers to assess microscopic changes in the brain's white matter, which is composed of billions of nerve fibres called axons that act like communication cables connecting various regions of the brain. DTI produces a measurement, called fractional anisotropy (FA), which characterizes the movement of water molecules along axons. In healthy white matter, the direction of water movement is fairly uniform and measures high in FA. When water movement is more random, FA values decrease. Abnormally low FA within white matter has been associated with cognitive impairment in patients with traumatic brain injury.

Dr. Lipton and colleagues conducted DTI on 37 amateur adult soccer players (median age 31 years). Twenty-nine of the study participants were men. Participants reported having played soccer for an average of 22 years and played an average of 10 months over the past year.

The researchers estimated how often each player headed the ball on an annual basis and identified regions in the brain where FA changed in relation to prior heading. This analysis identified areas of the brain where FA values were significantly lower in players who headed more. The players also underwent cognitive testing.

Players who ‘head’ have poor memory

"The brain findings of the most frequent headers in our study showed abnormalities of white matter similar to what we've seen in patients with concussion," Dr. Lipton said. "Soccer players who headed the ball above a threshold of 885 to 1,550 times a year had significantly lower FA in three areas of the temporal-occipital white matter."

Players with more than 1,800 headings per year were more likely to demonstrate poorer memory scores.

"What we've shown here is compelling initial evidence that there are brain changes that look like traumatic brain injury which are associated with heading a soccer ball with high frequency," Dr. Lipton said. Further research should be a priority. In the meantime, controlling the amount of heading that people do may provide an approach for preventing brain injury as a consequence of heading."

Soccer is the world's most popular sport, with more than 265 million active players.

- Photo of soccer player heading away the ball from Shutterstock)

We live in a world where facts and fiction get blurred
In times of uncertainty you need journalism you can trust. For 14 free days, you can have access to a world of in-depth analyses, investigative journalism, top opinions and a range of features. Journalism strengthens democracy. Invest in the future today. Thereafter you will be billed R75 per month. You can cancel anytime and if you cancel within 14 days you won't be billed.
Subscribe to News24
Next on Health24
Good news, bad news on concussions in high school sports

Get the newsletter
Voting Booth
Have you entered our Health of the Nation survey?
Please select an option Oops! Something went wrong, please try again later.
Yes
27% - 9950 votes
No
73% - 26288 votes
Previous Results