Nonsmokers get lung cancer too

Two local lung cancer survivors, Carla-Jane Gluckman and Ramao da Luz, challenged family and some foolishly gung-ho members of the press to get a taste of real firefighter training, the aim being to effectively remind us of each precious, life-giving lungful of air. Participants in "The Blazing Lung Cancer Challenge" were faced with the following, a daunting enough prospect even for those in the pink of health:

(As fast as possible, in firefighter protective gear, which is bulky, hot, and doesn’t lend itself to graceful movement)

- Simulate climbing stairs, doing 30 step-ups with a length of hose over each shoulder (much heavier than they look)

- Simulate breaking down a door: shift a (big) tyre by hitting it with a 10-pound hammer

- Put a ladder up against building and take it down correctly.

- Hoist the loft: using a pulley to lift a large water container and set it down without spilling.

- Negotiate The Maze – a dark system of pipes

- Put out an open fire

- Brave the Belly of the Beast – fire inside a container (when we were inside the temperature went up to about 480 degrees C, and it can go higher), in full gear with oxygen tank and mask. 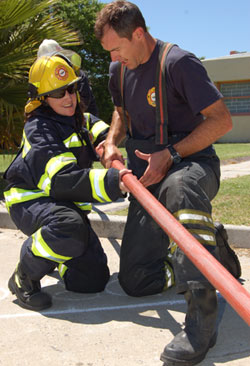 Last year around this time (November is Lung Cancer Awareness Month) lung cancer survivors scuba-dived in the V&A Waterfront's aquarium, which also seems, on the face of it, mad.

Such stunts are designed to draw attention to the vital organ in question and challenge assumptions: the common perception is that lungs ravaged by this grievous disease have no business anywhere near the unforgiving elements of water or fire.

There's another, subtler outcome to an event like this: it breaks down the divide between the well and the sick, and reminds the well, especially, that we are one species whose members merely take turns in suffering illness and in supporting those who suffer.

And surprisingly, I found it also helps breach another divide: that between smokers and non-smokers.

Smoking causes lung cancer. We aren't too good at hearing health messages, but we have acknowledged that one. The problem is, we twist the message to suit ourselves. In my non-smoking case, I've persuaded myself that, applied to me, the message reads: I can't get lung cancer, so I don't need to worry about it.

Which is, of course, illogical nonsense. But I repeat this and other magical health mantras to myself because it makes me feel less fearful and uncertain, less of a mortal, vulnerable human being.

Cancer is common. None of us will escape the disease in one or other of its many forms, either directly or through those close to us, and we need to tackle it together instead of behaving as though it can't get us if we don't think about it.

And lung cancer is particularly common. It claims over 1 million people globally each year -- more than breast, prostate and colorectal cancer combined.

There is no question that smoking is the major cause, and that most lung cancer patients have smoked. But the picture is more complex than this; being a non-smoker does not give you a get-out-of-jail-free card for this disease. About a quarter of lung cancer is not attributable to smoking; broken down by gender, 19% of lung cancer in men and 53% in women is not caused by smoking. The numbers of cases of non-small cell lung cancer (NSCL), the most common and serious kind, and which usually affects smokers, is on the rise in nonsmokers.

Apart from exposure to tobacco smoke, other factors that increase risk include exposure to asbestos and radon gas, and a family history of lung cancer.

For this reason, everyone needs to make full use of the tools we have against this disease:

1. Get to know your body, listen to it, and never ignore its complaints and grumbles, however petty these may seem. Heed these symptoms, which could indicate lung cancer (and a number of other conditions too):

2. Build your defences. You know the drill: enough exercise, enough rest, and good food. Fruits and vegetables have been shown to be especially potent allies in helping protect the lungs against smoke, and the DNA damage that leads to cancer. Get at least 5-a-day, and make it a varied festive crop of greens, oranges, reds , yellows and purples.

3. Become an anti-tobacco activist (the rude term is "smoke-Nazi"!) Fight to get tobacco smoke -- all tobacco smoke, first, second and third-hand -- out of our lives and the air we breathe. We live in a world where facts and fiction get blurred
In times of uncertainty you need journalism you can trust. For only R75 per month, you have access to a world of in-depth analyses, investigative journalism, top opinions and a range of features. Journalism strengthens democracy. Invest in the future today.
Subscribe to News24
Next on Health24
Loneliness may make quitting smoking even tougher