Here's your chance to stop smoking 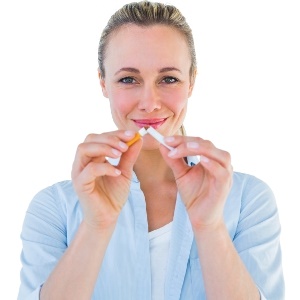 Making the decision to quit smoking is the most important step in kicking the habit, and that's what smokers are being encouraged to do as part of the American Cancer Society's Great American Smokeout on 19 November.

About 68 percent of smokers want to quit – and 42 percent try every year. However, only 4 percent to 7 percent succeed on their own for any given attempt, the cancer society says.

Medications help up to one-quarter of smokers who try to quit stay smoke-free for more than six months, and combining medication with counselling increases the chances of success.

"Some people are able to quit on their own, without the help of others or the use of medicines. For many, though, it can be extremely hard to break not only the physical addiction, but also the social and emotional ties to smoking," Cliff Douglas, vice president for tobacco control, said in a cancer society news release.

"The most important step is the first one: making the decision to quit. We hope the Great American Smokeout gives smokers an opportunity to consider making a lifesaving change," he added.

The event has been held on the third Thursday in November every year since 1976.

Read: 12 expert tips for cutting down on cigarettes

Efforts to discourage smoking have led to a significant decline in smoking rates in the United States, from 42 percent of adults in 1965 to just under 15 percent by June of this year.

However, millions of American adults still smoke, and tobacco remains the leading preventable cause of death in the United States, causing nearly 20 percent of all deaths and at least 30 percent of all cancer deaths, according to the news release.

"The rapid drop in smoking rates over the past several decades was an enormous challenge, and represents a true public health victory. But reducing smoking among those who continue to smoke may be even a bigger challenge," Douglas said.

Research shows that smoking rates are higher among those with less education and those living below the poverty level. Also, about 40 percent of all cigarettes are smoked by adults with mental illness, the news release said.

Prepare for the quitting battle

What does your smoking mean to you?

The benefits of quitting

We live in a world where facts and fiction get blurred
In times of uncertainty you need journalism you can trust. For 14 free days, you can have access to a world of in-depth analyses, investigative journalism, top opinions and a range of features. Journalism strengthens democracy. Invest in the future today. Thereafter you will be billed R75 per month. You can cancel anytime and if you cancel within 14 days you won't be billed.
Subscribe to News24
Next on Health24
Loneliness may make quitting smoking even tougher