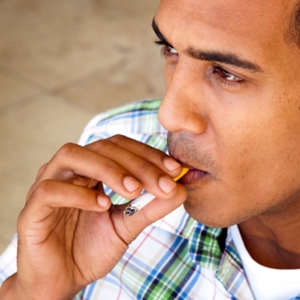 Researchers looked at 233 teens at 19 high schools in West Virginia, which has one of the highest smoking rates in the nation. Nearly 13% of people under age 18 in the state are smokers, according to the US Centers for Disease Control and Prevention.

"It is not unusual for teenage smokers to engage in other unhealthy habits. Smoking and physical inactivity, for instance, often go hand in hand," study lead author Kimberly Horn, associate dean for research at the George Washington University School of Public Health and Health Services, in Washington, DC, said.

All of the teens increased their amount of daily physical activity just by being in the study. Those who increased the number of days in which they did at least 20 minutes of exercise - equivalent to a short walk - significantly reduced the number of cigarettes they smoked.

Teens were more likely to quit smoking if they took part in the combination smoking cessation and fitness program and increased the number of days in which they did at least 30 minutes of exercise, according to the study.

"This study adds to evidence suggesting that exercise can help teenagers who are trying to quit smoking," Horn said.

The US Centers for Disease Control and Prevention has more about youth and tobacco.

We live in a world where facts and fiction get blurred
In times of uncertainty you need journalism you can trust. For 14 free days, you can have access to a world of in-depth analyses, investigative journalism, top opinions and a range of features. Journalism strengthens democracy. Invest in the future today. Thereafter you will be billed R75 per month. You can cancel anytime and if you cancel within 14 days you won't be billed.
Subscribe to News24
Related Links
Link between HPV and lung cancer
Exercise eases depression in obese
What 30 minutes of exercise may do for you
Next on Health24
‘Poisoning our planet’: 5 ways tobacco smoking harms more than just our health