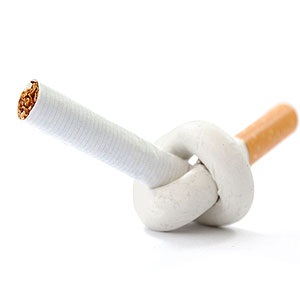 Nicotine replacement therapy can help smokers quit even when they do not think they are ready, researchers reported.

Smokers who do not yet want to quit but are prepared to reduce their smoking are twice as likely to stop in the long term if they use nicotine replacements to help them cut down gradually, the University of Birmingham team reported.

"Until now experts have advised people not to reduce their smoking but to quit abruptly," said Paul Aveyard, one of the researchers. "The worry has been that advising reduction will somehow deter people from the better alternative, which is stopping right now."

"This treatment programme is a way of potentially encouraging a lot more smokers into actually using nicotine replacement, which in the long term will help more of them stop smoking than if they hadn't done so."

How the study was done
Smoking is one of the biggest causes of disease and premature death worldwide and smoking-related illness costs Britain's state-run National Health Service between 1.4 and 1.7 billion pounds a year.

The researchers said that while half of British smokers try to stop every year, only 2 to 3% succeed. US research suggests the average smoker tries six to 11 times to quit.

The team reviewed seven trials involving nearly 3 000 people. Overall, 6.75% of those using some type of nicotine replacement were able to go six months without smoking - twice as many as those who were given placebos.

Studies suggest half of those who manage six months without smoking will maintain it for the rest of their lives.

Aveyard said the review also looked into the safety of smoking while using nicotine replacements, something which had previously been advised against, and found there was no suggestion of any serious health problems. – (Reuters Health, April 2009)