Almost like using a GPS, the neurosurgeon ‘flies’ in virtual reality towards the tumour. Software navigates him around sensitive structures in the brain without causing damage to these structures. Marí Hudson was there. (Pictures: Nick Aldridge)

The first interventional magnetic resonance (MR) and computed tomography (CT) theatre in South Africa, and one of the most digitally-advanced theatres in Africa, is now operational at Netcare N1 City Hospital. The new facility is set to become an African reference centre for the treatment of brain tumours. It has state-of-the-art MRI and CT scanners which enable neurosurgeons to remove specific brain tumours more accurately, says Dr Gerrit Coetzee, one of the neurosurgeons who use the new facility, which is open to neurosurgeons countrywide.

For the first time in Africa, a patient can undergo MR or CT scanning during brain surgery to ensure more accurate surgery. During surgery new navigation software identifies and track fibre tracts around the tumour that must be removed. This leads to a dramatic decrease in the risk of neurological damage to the patient.
The surgical plan is mapped out on the software and sent to the navigation computer, which then navigates the surgeon via a state-of-the-art microscope. Almost as if he is using a GPS to guide him, the neurosurgeon ‘flies’ in virtual reality towards the tumour, while the software navigates him around and not through fibre tracts, Coetzee explains.

The new centre is the first of its kind in South Africa and only the second (after Sydney) in the southern hemisphere. There are 58 similar centres elsewhere in the world, mainly in the US and Europe.

8:00 MRI scans are taken to show the tumour, and specific reference points marked on the patient’s skull. The tumour is 5,8mm in diameter and located in the right frontal lobe; not deep within the brain and easily accessible. 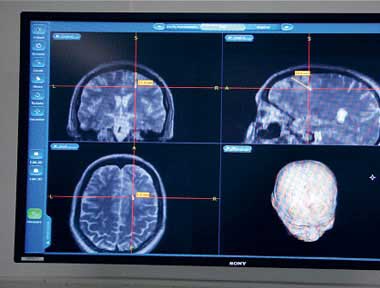 8:55 The patient is wheeled into theatre, anaesthetised and her head is clamped with a special metal-free head clamp. This stabilises the position of the brain and aligns the markers on her face with the corresponding markers on the MRI scans by using software to establish electronic navigational communication. Caption: The patient’s head is clamped with a metal-free head clamp.

9:50 Surgeons inject specific substances into the patient’s blood vessels to shrink the brain. This created more space for the surgeon to work without harming brain tissue. The operation starts.

By 10:18 am the brain is exposed after cutting through the outer lining of the brain.

By 10:27 navigation starts. The surgeon excises a biopsy sample for immediate pathology screening.
By 10:57 all visible tumour tissue has been removed. Caption: The view through the microscope is displayed on the screen at the back.

11:26 Carefully, the patient is moved on to a special theatre bed for an MRI scan during the brain operation. The scalp has been closed temporarily and the patient’s head covered to protect her from all possible germs. Metal detectors have been used to ensure there is nothing metallic which can be disastrous within the magnetic field. The patient is wheeled into the MRI scanner. 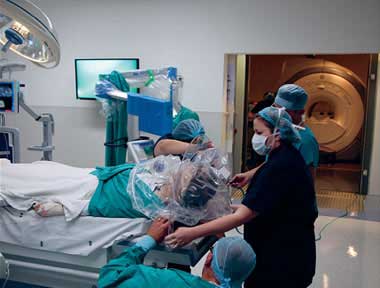 Caption: The patient is moved on to a new bed for intra-procedural MRI scanning.

12:10 The patient is back in theatre. The MRI showed that all of the visible tumour has been removed. Final cauterising and closure of the wound follow.

The patient recovered and was discharged within seven days of the operation. She has not suffered any ill effects since the operation.

We live in a world where facts and fiction get blurred
In times of uncertainty you need journalism you can trust. For only R75 per month, you have access to a world of in-depth analyses, investigative journalism, top opinions and a range of features. Journalism strengthens democracy. Invest in the future today.
Subscribe to News24
Next on Health24
Meningitis