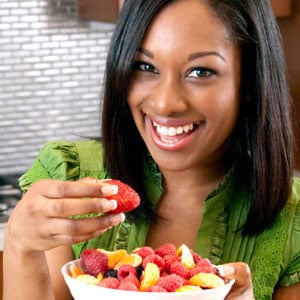 An abdominal aortic aneurysm is a bulge in the wall of the part of the aorta - the largest artery in the body - that runs through the abdomen. If an aneurysm ruptures, there is a high risk of death from bleeding. Ultrasound screening can detect the condition.

In this study, researchers analysed data from more than 80 000 people, aged 46 to 84, in Sweden who were followed for 13 years. During that time, nearly 1 100 of them had abdominal aortic aneurysms, including 222 whose aneurysms ruptured.

People who ate two servings of fruit a day had a 31% lower risk of the condition and a 39% lower risk of rupture than those who didn't eat any fruit, according to the study, which appeared in the journal Circulation.

"A high consumption of fruits may help to prevent many vascular diseases, and our study suggests that a lower risk of abdominal aortic aneurysm will be among the benefits," lead author Dr. Otto Stackelberg, a Ph.D. student in the nutritional epidemiology unit of the Institute of Environmental Medicine at the Karolinska Institute in Stockholm, said in a journal news release.

High levels of antioxidants in fruits might protect against abdominal aortic aneurysm by reducing inflammation, the researchers said.

They found, however, that eating lots of vegetables, which are also rich in antioxidants, did not reduce the risk of abdominal aortic aneurysm. Vegetables lack some types of antioxidants that are found in fruits, Stackelberg said.

"Vegetables remain important for health," he said. "Other studies have found that eating more fruits and vegetables may decrease the risk of cardiovascular diseases, type 2 diabetes, high blood pressure and several cancers."

Although the study found reduced aneurysm risk among people who ate more fruit, it did not establish a cause-and-effect relationship.

The American Academy of Family Physicians has more about abdominal aortic aneurysm.

We live in a world where facts and fiction get blurred
In times of uncertainty you need journalism you can trust. For only R75 per month, you have access to a world of in-depth analyses, investigative journalism, top opinions and a range of features. Journalism strengthens democracy. Invest in the future today.
Subscribe to News24
Related Links
Vegetarians may live longer
Mediterranean diet tied to fewer hot flashes
Vitamin C superheroes
Next on Health24
Can’t stand ordinary sounds like chewing and breathing? Scientists may have found out why