Why parents should raise their children to be bilingual 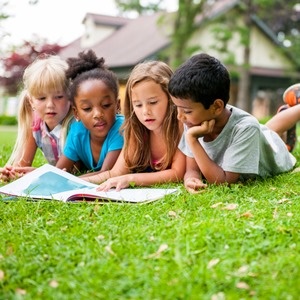 If you’re raising your kids to be bilingual so that they may maintain their heritage, it might be gratifying to know that you’re doing more than that for them.

According to a recent study by the University of Alberta, it can also open doors to being creative storytellers. The research was published in the journal Language, Cognition and Neuroscience.

“We found that the number of words that bilingual children use in their stories is highly correlated with their cognitive flexibility – the ability to switch between thinking about different concepts,” said Elena Nicoladis, lead author and professor in the Department of Psychology in the Faculty of Science.

Researchers examined a group of French-English bilingual children who were taught two languages since birth, rather than learning a second language later in life. A new, highly sensitive measure for examining cognitive flexibility was used, allowing researchers to examine participants’ ability to switch between games with different rules, while maintaining accuracy and reaction time.

A change in understanding benefits of multiple languages

Although previous research has shown that bilingual children score lower than monolingual children on traditional vocabulary tests, the researchers say that the recent results are changing our understanding of the link between multiple languages and cognition in children.

“The past research is not surprising. Learning a word is related to how much time you spend in each language,” said Nicholadis.

For bilingual children, time is split between languages, Nicholadis explained, which leads to the conclusion that they tend to have lower vocabularies in each of their languages. However, this research shows quite the opposite: that as a function of storytelling, bilingual children are equally strong as monolingual children.

The brain benefits from learning a second language

A 2014 study carried out by an international team of researchers based in Singapore looked at the cognitive abilities of 114 six-month-old babies. They found significant cognitive advantages of exposure to two languages, and that these advantages reveal themselves early on – irrespective of the languages spoken.

Research from 2016 by the University of Washington found that brains of babies (from the age of 11 months) exposed to two languages develop better, boosts their memory and solving skills.

The study involved an experiment which found the area of the brain responsible for what is known as "executive function" to be more developed among babies in a bilingual home, than one with just one language.

Another 2017 study, reported by Health24, found that bilingual children have an easier time learning additional languages later in life than those who speak only one language, researchers report.

So if you were uncertain about whether to raise your child speaking more than one language, it should give you peace of mind to know that encouraging a bilingual education is actually a safe bet.

We live in a world where facts and fiction get blurred
In times of uncertainty you need journalism you can trust. For 14 free days, you can have access to a world of in-depth analyses, investigative journalism, top opinions and a range of features. Journalism strengthens democracy. Invest in the future today. Thereafter you will be billed R75 per month. You can cancel anytime and if you cancel within 14 days you won't be billed.
Subscribe to News24
Related Links
Why it's great to learn a second language
When do we start developing our language skills?
The languages you speak may influence the way you experience the passage of time.
Next on Health24
Are the kids okay? How the pandemic spiked mental health issues in children, and how to help them