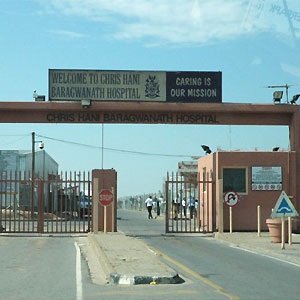 The Gauteng Department of Health told Health24 that is it not taking lightly claims that a mentally ill teen at Chris Hani Baragwanath Hospital was beaten unconscious and left in a pool of blood by a doctor who was trying to restrain him.

“Mental health is among others one of the priorities of the department,” spokesperson Steve Mabona told Health24.

While his father was completing the hospital paperwork, the patient allegedly bit an elderly man who was helping a doctor and a security guard to restrain him.

According to the source, after the patient was admitted he was sent for brain scans and it showed that he had suffered no serious injuries.

The newspaper reported that mentally ill patients routinely suffer bruising and nerve damage because workers at the hospital restrain them with bandages instead of specially designed shackles.

“If bandages are used, they should be well padded, and patients have to be closely observed as indicated in the Mental Health Care Act (MHCA),” said Mabona.

He said mechanical restraints should be a last resort. “If they are used, this should be done in compliance with the MHCA and regulations.”

The South African Federation for Mental Health (SAFMH) called on the department to deal with the incident in a decisive manner.

Read: Abuse of mentally ill patient: SAHRC must step in

“There should no doubt be consequences for this kind of treatment against persons with psychosocial disability and this is a matter that we expect the department of health should address immediately,” SAFMH programme manager Marthé Viljoen told Health24.

“As an act of abuse, this is something the SA Human Rights Commission should also get involved in,” she said.

“Doctors take an oath to put the wellbeing of their patients first and to do no harm. It is negligence if interventions are damaging or endangering the health of patients.”

Viljoen said patients are often unaware of their rights and are not empowered to stand up for them, but the SAFMH is working to change this.

“The South African Mental Health Advocacy Movement and the Mental Health Watch reporting system are there to fulfil this role to empower mental health care patients to know their rights and provide a system in which violations can be reported.”

She encouraged mental health care patients to report abuse and human rights violations by sending an email to humanrights@safmh.org, calling 011 781 1852 or texting 0760788722.

We live in a world where facts and fiction get blurred
In times of uncertainty you need journalism you can trust. For 14 free days, you can have access to a world of in-depth analyses, investigative journalism, top opinions and a range of features. Journalism strengthens democracy. Invest in the future today. Thereafter you will be billed R75 per month. You can cancel anytime and if you cancel within 14 days you won't be billed.
Subscribe to News24
Related Links
Abuse of mentally ill patient: SAHRC must act
Surgeon walks out on patient, not once but twice
3 000 people waiting for their turn to see again
Next on Health24
A psychopath's brain is biologically different from regular humans, new study finds