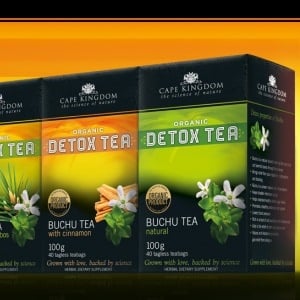 Buchu has a long history as a medicinal herb in the Cape region of South Africa and was used by the indigenous Khoisan for centuries who believed it to be an elixir of youth. It is part of the Cape Floral Kingdom and is a protected plant.

There is also a completely unrelated plant that grows in the Mediterranean region called “Indian buchu” (Myrtus communis).

- The kind of buchu that is mostly used for medicinal purposes is Agathosma betulina.

- The medicinal properties of the buchu plant reside in its leaves.

- All kinds of buchu are part of the Rutaceae family, which is the same family as citrus fruits.

- Buchu was first exported to Britain in the eighteenth century. In Europe it was called “nobles’ tea” because only the wealthy could afford it. There were eight bales of buchu on board the Titanic.

- Agathosma betulina is a low shrub (±1.5m) with white or pink flowers. The leaves have oil glands underneath that release a strong aroma. In the food industry buchu oil is often used to impart a blackcurrant flavour to foods.

- In 1970 a process was developed whereby the pure oil is extracted from the buchu plant by means of a steam process.

How is buchu ingested?

The Khoisan used to chew buchu leaves, but nowadays buchu is usually taken as a tea, and buchu teabags have been commercially available for some time. Another way to enjoy the benefits of this herb is in buchu brandy or “boegoebrandewyn”. This has been used as a folk remedy or “boereraat” for centuries. Buchu brandy is made by steeping a few sprigs with leaves in a bottle of brandy for at least five days.

For many years the health benefits of buchu were largely folkloric and there were few or any scientific tests to provide empirical evidence of the medicinal value of this plant.

In traditional medicine the purported benefits of buchu are many and it was used to treat ailments ranging from arthritis to flatulence to urinary infections. Traditional use is however often not supported by scientific studies, but in the case of buchu this is rapidly changing.

In the late 1990s Michael Stander – Managing Director of Cape Kingdom Nutraceuticals – spotted a gap in the health product market and started to create Buchu products for the local and international market.

According to Cape Kingdom Nutraceuticals buchu is recognised as South Africa’s “miracle herb” with potent natural anti-inflammatory properties. Buchu also has anti-infective, antifungal and antibacterial properties, enabling it to act as a natural antibiotic with no side effects. Buchu contains naturally occurring antioxidants and bioflavonoids such as Quercetin, Rutin, Hesperidin, Diosimin, Diosphenol and Vitamins A, B and E.

Proving the power and benefits of buchu

Michael teamed up with Prof Patrick Bouic (Head of Immunology at Tygerberg Hospital) to prove the power and benefits of buchu – under the auspices of Synexa Life Sciences. The first human clinical trial was conducted in 2002 at the Sports Science Institute with Prof Tim Noakes.

According to Professor Bouic buchu treats the root cause of inflammation-based ailments, providing a natural and safe alternative.

Synexa Life Sciences has confirmed that research into the health benefits of buchu oil has demonstrated that it has potent anti-inflammatory properties. In their own words: “It was shown that the oil inhibits both the acute and chronic inflammatory responses.” According to Synexa, buchu oil is also able to manage chronic inflammation at low levels (5mg per capsule).

- Prevention of muscle damage induced by exercising or trauma

Watch: How can buchu treat a urinary tract infection?

The health benefits of buchu tea

We live in a world where facts and fiction get blurred
In times of uncertainty you need journalism you can trust. For only R75 per month, you have access to a world of in-depth analyses, investigative journalism, top opinions and a range of features. Journalism strengthens democracy. Invest in the future today.
Subscribe to News24
Next on Health24
Chlorophyll