Kim-Jong Un claims he has a cure for HIV, MERS and Ebola 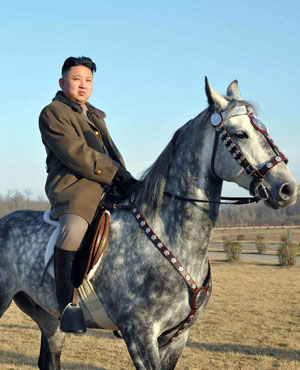 North Korean leader Kim Jong Un riding a horse as he inspects the training ground of a horse riding company under the Korean People's Army. (KCNA VIA KNS/ AFP)

Kim Jong Un, the supreme leader of North Korea, has made an astounding medical breakthrough, or so the country’s state media have reported. In one fell swoop, Kim has conquered HIV, Ebola, Diabetes, some cancers and a whole host of other medical conditions, with a revolutionary new medication.

The injection, called Kumdang-2, is made from Ginseng, infused with rare earth elements, though the exact elements used are not disclosed. In the words of Dr Jon Sung Hun, quoted by the Korean Central News Agency, “The researchers insert rare earth elements (REE) into insam (ginseng) by applying the mico-elementary fertilisers of REE to the fields of insam.”

The drug has a relatively comprehensive website, available in English and Russian, which on one page cites a study conducted in Africa on AIDS patients. According to the study, after being administered the maximum dose of Kumdang-2, 56% of patients were completely cured of AIDS, and the other 44% were "considerably cured".

Ginseng, of course, has been used medicinally for centuries, especially in Asia. There is, however, a lack of evidence around its efficacy in treating erectile dysfunction or diabetes, for which its use is often indicated. The likelihood of it treating conditions as diverse as arthritis and epilepsy is essentially zero.

Rare Earth Elements (REEs), on the other hand, can be downright harmful. The group of seventeen elements, which actually aren't that rare, have caused concern in recent years, especially in China, due to their tendency to accumulate in the blood, brain and bones of those who ingest them. A 2005 study published in the Journal of Rare Earths found that high levels of REEs were associated with a decline in liver function.

Surprisingly, Kumdang-2 is not restricted to the hermit kingdom; the site advertises a European distributor in Moscow, and another in Australia, but be warned, not only is it almost certainly useless, it’s also not cheap. The dosage instructions are incredibly obtuse and run to over 2 500 words, but we managed to deduce that to theoretically prevent HIV one would need between 40 and 56 injections. At $50 an injection, this is going to set you back between R27 000 and R38 000, at current exchange rates. The injections are slightly cheaper if brought in packs of 3 or 5. Health24 tried to contact the suppliers with no success, suggesting the market in Europe isn’t particularly well established.

Those who aren’t familiar with North Korea might find this sort of statement quite startling, but outlandish claims are par for the course with the country’s ruling dynasty. For example, it is commonly accepted that all three of the regimes leaders, Kim-Jong Un, Kim-Jong Il and Kim-Il Sung, never defecated or urinated, having developed a superior physiology.

The nation’s previous president, Kim-Jong Il in particular was prone to some quite incredible proclamations, many of which were "reported" by the same news agency as this story. Some of the best are:

2.      Despite never having played golf, Kim-Jong Il one day picked up a golf club and shot a world-record 38 under-par, including 11 holes-in-one. He then immediately retired from golf.

3.      His birth caused a double rainbow and a new star was created in the sky.

Doctor confirms Kim had a stroke

The last speeches of doomed dictators

We live in a world where facts and fiction get blurred
In times of uncertainty you need journalism you can trust. For only R75 per month, you have access to a world of in-depth analyses, investigative journalism, top opinions and a range of features. Journalism strengthens democracy. Invest in the future today.
Subscribe to News24
Next on Health24
Is integrative medicine right for you?