Rustenburg, in the North West province of South Africa, loosely means “town of rest”. But for the women who are secretly being sexually violated and raped, it is a nightmarish "town of horror".

Unlike in the rest of South Africa, the bulk of people living in Rustenburg are men. The high percentage of men is due to the large number of mine workers in the "platinum mining belt" of South Africa.

Here around 11 000 women and girls are raped each year, according to a scathing MSF (Médecins Sans Frontières/Doctors Without Borders) report released at the 1st South African National Conference on Violence, which is aimed at mobilising science, communities and policy for the prevention of all forms of violence in South Africa.

The report entitled Untreated Violence: The Need for Patient-centred Care for Survivors of Sexual Violence in the Platinum Mining Belt, discusses the findings of an in-depth survey of over 800 women aged 18-49 years in Rustenburg Local Municipality. 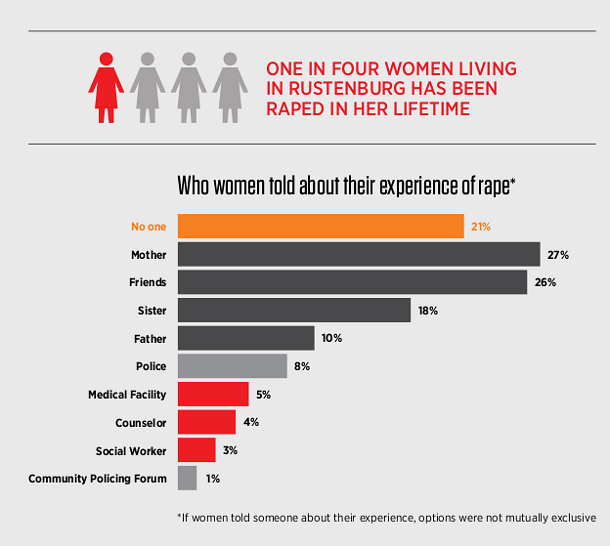 It revealed that one in four women has been raped in her lifetime. "Extrapolating this statistic to the population level, approximately 50 000 women and girls in Rustenburg Local Municipality have experienced rape in their lifetime," stated the report.

Despite rape putting women at greater risk of HIV acquisition, only 95% of rape survivors had never told a health professional about the incident.

The study also showed that a higher proportion of women who had been raped, reported being raped by a non-partner (72%) than a partner (59%).

Shockingly, only half of those surveyed knew that HIV could be prevented after being raped.

"There is a clear imperative to raise awareness among communities about where to access services and the benefits of medical attention after rape,” said Dr Amir Shroufi, MSF Medical Co-ordinator in South Africa. “Timely access to care can prevent negative health consequences, including the risk of contracting HIV and other infectious diseases.”

- Only 73% of women knew that pregnancy could be prevented after rape.

- Only one in two women (50%) knew that HIV infection could be prevented after rape.

- Less than half of women (45%) knew that HIV treatment existed to prevent HIV infection after rape.

According to the North West Province Department of Health, out of 783 total health facilities in the district, only 11 designated public health facilities — including the MSF/DOH Kgomotso Care Centre in Boitekong — provide post-exposure prophylaxis (PEP) to prevent HIV, and support forensic examination for rape survivors.

“Treatment and psychosocial counselling for rape survivors reporting within 72 hours can prevent HIV infection and unwanted pregnancy, and help to mitigate long-term psychological suffering,” said MSF Epidemiologist Sarah-Jane Steele, “but the majority of women we interviewed don’t know such treatment exists, services close to where they live are sorely lacking and lack of financial independence may make access difficult even when services are present.”

Steele said the report's findings show that rape is not only highly prevalent in Rustenburg Municipality, but that opportunities to reduce the more serious health impacts of rape are being missed.

There are many barriers that stand in the way of rape victims receiving the quality care they require.

What’s urgently required, said Dr Shroufi, is a patient-centred approach to rape and sexual violence that prioritises the medical and psychosocial needs of survivors. For this to happen, he said, more trained staff and more widely available comprehensive services are needed.

“All rape survivors should receive access to comprehensive medical and psychosocial services to reduce the risk of contracting HIV and other infectious diseases, preventing unwanted pregnancy, addressing psychological distress and linking the patient to appropriate social support," suggested Dr Shroufi.

MSF, in partnership with the North West Province Department of Health, is piloting the expansion of a patient-centred response to sexual violence, in Rustenburg's Bojanala Health District. This project also entails a clinical mentorship programme for professional nurses on the care and management of sexual violence.

The basic package of care that MSF offers in Bojanala includes:

- Post-exposure prophylaxis to prevent HIV infection, and treatment for other sexually transmitted infections

- Vaccinations to prevent hepatitis B and tetanus

- Counselling as well as linkage to appropriate social support measures

MSF is therefore urging government to meaningfully respond to rape and sexual violence in a country where an average of 118 rapes are reported each day.

We live in a world where facts and fiction get blurred
In times of uncertainty you need journalism you can trust. For only R75 per month, you have access to a world of in-depth analyses, investigative journalism, top opinions and a range of features. Journalism strengthens democracy. Invest in the future today.
Subscribe to News24
Related Links
Blind, HIV positive street child becomes motivational speaker
Rape Crisis decries 4-year-old's rape ordeal
Rape survivor gets back on her feet
Next on Health24
Nurses have high suicide risk, US study finds