One dirty toilet for patients and staff at Limpopo clinic 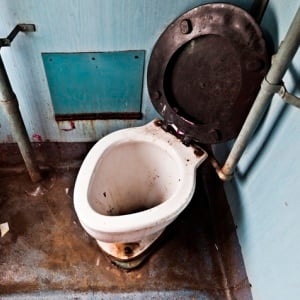 Patients and staff need to share one dirty toilet.

With only a single working toilet shared by both male and female patients at Sibasa Clinic in Makwarela, outside Thohoyandou, security personnel at the clinic are concerned.

The security officials say they are afraid that the current situation of the shared toilet could lead to sexual assaults and harassment cases.

Earlier this year the Department of Health embarked on fixing the broken toilets at the clinic after Health-e wrote about the situation. But the toilets have become blocked again, leaving only one male toilet in a filthy condition operational. There is also no toilet paper or a basin for washing hands.

“We are worried about the situation at the clinic as men and women cannot be sharing a single toilet. Some people might end up taking advantage of the current situation to commit certain crimes such as sexual harassment and rapes. As security guards stationed at the gates, we cannot be always on the lookout whenever a person goes to the toilet,” said a security guard at the clinic.

The situation is made worse as the maintenance people stationed at the clinic claim they have not been paid for almost two months now and are considering strike action until they get their salaries.

The guard said that they were told that the toilets would be fixed soon but they are still waiting.

'Waiting for someone to get raped'

“We have been told (by management) that the blocked toilets have been reported to relevant people for quite some time now. But nothing seems to have been done to ensure that the toilets are being repaired. Something needs to be done urgently as some people have got dirty minds,” he said.

Some of the villages which are heavily reliant on the clinic for health services include Dzingahe, Sibasa, Miluwani and Makwarela.

“I wonder if they are still waiting for someone to get raped inside that toilet for them to act and unblock the blocked toilets. It takes less than a day to fix a toilet, but here it’s taking months for them to act,” he added.

Health Department spokesperson, Neil Shikwambana, said he cannot comment on the issue of unpaid maintenance workers, as they work under a contractor and are not directly employed by the department. He however promised to investigate the delays in getting the toilets repaired. - Health-e News.

We live in a world where facts and fiction get blurred
In times of uncertainty you need journalism you can trust. For only R75 per month, you have access to a world of in-depth analyses, investigative journalism, top opinions and a range of features. Journalism strengthens democracy. Invest in the future today.
Subscribe to News24
Related Links
Rural gogos walk far to see the doctor
Drunken workers delay construction of Alexandra clinic
Woman gives birth in street after sent home from clinic
Next on Health24
Four important reasons why you should get the 2021 flu shot