Life expectancy in South Africa dropped by 4.3 years between 1990 and 2013, according to a research coordinated by the Institute of Health Metrics and Evaluation (IHME) of University of Washington.

The report states: “The average life expectancy for women was 63 years in 2013, with men living 57.7 years.”  It goes further to assert that “By contrast, in 1990 women lived on average 68.9 years and men had a life expectancy of 60.5 years.” The IHME study covered 188 countries globally and ranks South Africa 162 in terms of life expectancy for females and 169 for males.

I would like to respond to the said study and demonstrate that it is scientifically barren and it is a rather lazy piece of work hiding behind a facade of the so called cross country comparative studies.  It is downright misleading in the case of South Africa. But I need to preamble the critique with broader work on cross country studies.

They are very important inputs for measuring progress on global programmes such as the Millennium Development Goals (MDGs) and in the post-2015 agenda, for Sustainable Development Goals (SDGs). A number of such global data exercises exist. They are very complex statistical operations because of temporal and spatial data dissonances.  So those who undertake them always face a barrage of scientific criticism.  Global agencies and researchers in this endeavour are faced with serious dilemmas of ex-post harmonisation of data, and or imputations or having to ignore country sources in order for their global model to work.

As part of the United Nations Statistics Commission (UNSC) which I had the privilege of being the Chair of in 2009-10, country statisticians-general have repeatedly raised concerns on data gaps that have to be filled and on violations committed by some multilateral agencies that engage in global statistical enterprises.

The United Nations Human Development Index (HDI) is one such global flagship undertaking that caught the ire of the UNSC. From 2003 the late Ian Castles, the then retired Chief Statistician of Australia, wrote a scathing critique on the report and up to the present the UNSC has continuously petitioned the United Nations Secretary General on the Human Development Report (UN-HDR) for what the Commission has observed as statistical and technical limitations in it. South Africa, supported by Morocco and Brazil has been the most documented and outspoken on the report.

For instance equal weighting that the report assigns to its three areas of measurement makes little statistical sense, let alone omissions of country level data and some spurious imputations that often leave countries wondering whether the report relates to them.

The leading economy in Africa

Another important global comparator is the International Comparisons Programme (ICP). It is conducted under the supervision of the UNSC. It is undertaken every five years and measures real sizes of economies of countries on a purchasing power parity (PPP) basis.

It is this study that concluded in the main that Nigeria and Egypt have now taken first and second spot and South Africa is now the third largest economy on the continent on a PPP basis. The 2011 ICP report submitted at the UNSC for consideration and adoption in 2014 also showed China’s rapid ascendency towards being the largest economy in the world.

Coming back to the main subject of my input on the article “South Africa’s life expectancy drops by 4.3 years from 1990 to 2013”, I would argue that it makes for a remarkable reading on an important subject alluding to measuring longevity.

Unfortunately the claims it makes cannot be substantiated by scientific and historical facts in the country. First by 1990, there was no scientific study of the aggregate South African population, let alone one that related to cause of death, which the article so liberally reports on.

Questions over the 1970 census

The 1970 Census, which by all counts was labelled the only most accurate account of the population in South Africa under both colonial occupation and subsequently under apartheid, still failed dismally as a census because only a sample of 5% of Black census records were processed, just demonstrating how cavalier the apartheid state institutions were even in matters of scientific inquiry.

So an imputation of life expectancy and cause of death in the light of such scant information and discrepant data history requires a more elaborate scientific process than the shallow grave approach dished to us by the IHME. Little wonder that the IHME report comes up with an unexplained estimate life expectancy at birth for females of 68.9 as of 1990 for South Africa.  This estimate can only be appropriate and relevant to populations that were measured, in this regard largely Whites.

Unfortunately the report is stingy on methods, sources of data and metadata and leaves one with nothing else to critique except the numbers themselves. This is an unfortunate lowly approach to scientific scrutiny but I am unfortunately left with no choice.

According to all sources of data from Statistics South Africa, including the October Household Surveys, Census 1996 and subsequent statistical undertakings in post-apartheid South Africa, the best estimate of female life expectancy as of 1990 would have been 63 years and not 68.9 years as IHME estimated.  This is a gap of about six years, which is statistically and demographically very significant.

According to the 2014 mid-year population estimates report published by Statistics South Africa in 2014, life expectancy at birth in South Africa in 2013 was 58.2 years for males and 62.1 years for females. The male figure is comparable to the 58.3 years estimated by the IHME report while for females the IHME report estimated a higher life expectancy of 64.7 years.  Figure 1 below makes the point vividly. 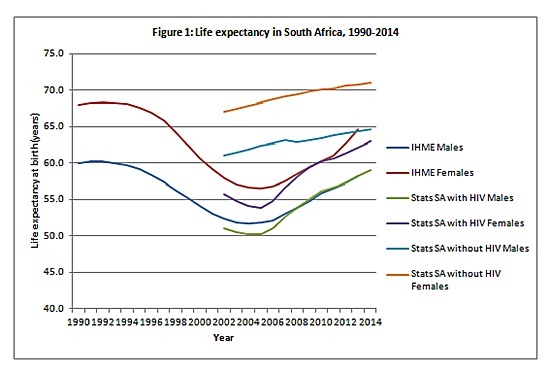 This paper argues that the estimates provided by the IHME for the period 1990 to 2006 are higher than what would be expected for South Africa during that time, particularly for the earlier years. The IHME estimated life expectancy at birth for females in 1990 at 68.0 years, while Eric O. Udjo, directorate of analysis Statistics SA, estimated it at 63.4 years based on the 1996 population census, indicating a gap of about 5.4 years.

This trend requires interpretation of historical facts about the country. Even after having taken into account population age structure in the comparison, a crude death rate of 7.7/1000 is very low by any standard and could not be the lived reality in South Africa then. The United States has had a crude death rate of 8/1000 in the last five or so years.

However, beyond 2002, a new pattern which showed a very significant age-sex selectivity of mortality emerged and this heralded the onset of mortality due to HIV and Aids effects and the number of deaths peaked at 15.2/1000 in 2005 with a very strong female and 20-39 age group bias, before declining back to 10.2/1000 in 2014. Albeit moderately, the current mortality experience still contains an age-sex selection bias.

Who the figures speak to

An estimate of life expectancy for females in a scenario without HIV and Aids twenty years into democracy would be 71.0 years, about two years more than the 68.9 years estimated for 1990 by IHME.  So the claim by the IHME is indeed a fallacy and can only reflect the then prevalent measurement bias of mortality experience amongst the measured population and therefore that largely of the White population.

The IHME have not tempered their base data and therefore their “intellectual work” with that of population groups other than that of the then White minority. Therein lies the major flaw of the IHME storyline. The contrast between the estimate of IHME for 1990 and one of 2013 on life expectancy in comparison to that of StatsSA is palpable as shown in Figure 1 above.  For 2013 the life expectancy estimate generated by StatsSA and one generated by IHME are very close at respectively 62 and 63 for females and 58.2 and 57.7 for males.

The question then is why are the estimates of life expectancy so divergent for an earlier period and yet so convergent at a later period?  The answer is indeed not difficult to find.  The sources of data and methodology in the case of IHME remain opaque and inexplicable, at least in the case of South Africa, whilst in the case of StatsSA this is all in the public domain for both periods.

The second point of difference is that I have provided a historical perspective that had major implications on coverage of death notification in South Africa for which a methodological process had to be implemented to compensate for data gaps and defects. This perspective and the necessary technical compensation are not forthcoming from IHME.

That life expectancy declined in South Africa is not a secret. The decline in mortality in South Africa was noted around 2005/2006, following a consistent increase following the onset of HIV/Aids in the country. The increase in mortality was particularly observed in the ages 20 to 54 and at age 0 (see Figure 2). The greatest decline was also noted in the same age groups from 2007 (see Figure 3).

The decline in mortality in South Africa was noted around 2005/2006, following a consistent increase following the onset of HIV/AIDS in the country. The increase in mortality was particularly observed in the ages 20 to 54 and at age 0 (see Figure 2). The greatest decline was also noted in the same age groups from 2007 (see Figure 3). In this regard four important points stand out:

There are two questions the last point begs.  First why are the estimates so close now compared to 1990 and second why has the life expectancy gap between sexes narrowed, 5 years compared to 8 years and thus coming closer to that of StatsSA of 4 years.

In this regard it is important to note that the statistician-general of South Africa and the agency StatsSA that I am privileged to lead, are judged and subjected to unmitigated intellectual and public scrutiny and the leadership and staff of StatsSA dearly hold the burden and pleasure of service as the primary goal for the existence of StatsSA.

We live in a world where facts and fiction get blurred
In times of uncertainty you need journalism you can trust. For only R75 per month, you have access to a world of in-depth analyses, investigative journalism, top opinions and a range of features. Journalism strengthens democracy. Invest in the future today.
Subscribe to News24
Related Links
Life expectancy in SA drops by 4.3 years
Having a purpose may lead to a longer life
Childbirth in SA at a proportional record low
Next on Health24
In-depth: Is government ready to invest in mental health?