TAC: Drop the charges against the #BopheloHouse118!

The original 129 were arrested following a peaceful night vigil outside Bophelo House, the headquarters of the Free State Department of Health. They were protesting the state of the public healthcare system in the Free State, their conditions of employment and the decision of the Free State MEC of Health, Benny Malakoane, to effectively terminate their employment without warning. At no point did the 129 pose any threat to public safety. 11 of the initial 129 have signed admissions of guilt as part of a settlement with the prosecuting authority.

“The Bophelo House 118 are not criminals. They are hugely committed, caring, and brave individuals. They have spent many years enduring undignified conditions of employment and receiving little or no pay in order to serve some of South Africa’s poorest, most vulnerable communities,” said Opanyana Mohutsioa, Chairperson of TAC Free State. 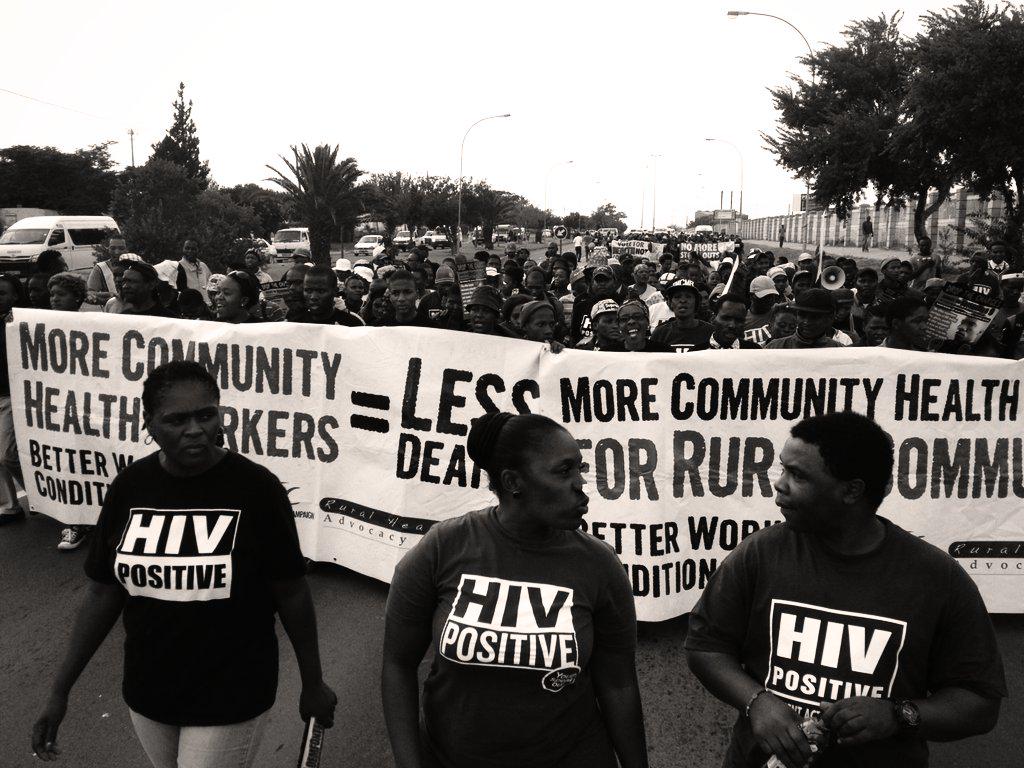 “The unjust charges, we believe were a punishment not for breaking any law but for having publicly dared to defy the MEC of Health, Dr Benny Malakoane.”

One of the 118, Rebecca Masiza spent seven years as a home-based caregiver servicing impoverished communities before being dismissed. In some cases she says she had to “bring food from home to give to my patients so they could take their treatment.” Lebuajwang Thobela, an HIV counsellor who was also arrested says, “this has not only affected me financially, but emotionally as well. I worry about my patients, they now have no one to help them.”

The 118 are charged with contraventions of the Regulations of Gatherings Act, an apartheid-era law that unreasonably restricts the constitutional right to peacefully protest. The Social Justice Coalition intends to challenge the Constitutionality of the Act and explains that this law criminalizes peaceful protest, especially for poor and working class communities struggling for dignity and equality. We fully support the SJC in this regard.

At the same time as the 118 are appearing in court, the severe dysfunction in the Free State healthcare system continues. The Mail & Guardian reported on 20th March about the unacceptable conditions at Dihlabeng Hospital.

This follows a letter from concerned doctors that was published by GroundUp on 27th February. Given the experiences of our members in the Free State, we find the accounts of the doctors and the Mail & Guardian article to be credible.

On 4th March TAC responded to a statement that the Free State government released in response to the letter from the concerned doctors. That statement can be read here.

In his budget vote speech on 24th March Malakoane attempted to discredit the Mail & Guardian article. He also attempted at length to blame insufficient budgetary allocations from National Treasury for the severe financial difficulties in the province.

While budgetary allocations may or may not be as high as they should be – we are not in a position to say at the moment – it is clear that poor financial management and more general mismanagement in the Free State Department of Health has been a more fundamental contributor to the crisis. The Department was put under Treasury administration last year.

We are deeply disappointed by MEC Malakoane’s ongoing efforts to deflect blame and to deny the clear and obvious crisis in the healthcare system that he has responsibility for. In his budget vote speech he quotes both the Constitution and the Freedom Charter, but in his actions as MEC of Health he shows a callous disregard for both those documents and for the rights of the people he is meant to serve. As a civil society organisation advocating for the rights and interests of users of the public healthcare system, we will continue to hold MEC Malakoane to account for as long as it takes.

We repeat our call on Premier Ace Magashule to dismiss MEC Malakoane immediately and to appoint an appropriately qualified and committed person in his place. We also remind the public that MEC Malakoane is still facing multiple charges of fraud and corruption. He will be appearing again on 5th May and on 5th June on two separate sets of charges.

We call for a Provincial Health Consultative Forum to be convened of all stakeholders, including healthcare workers who have exposed conditions in hospitals and clinics, and for a plan to be developed and agreed on to fix the Free State health system in order to provide health care services to everyone as envisaged by the Constitution. On the condition that MEC Malakoane is dismissed TAC repeats its willingness to work with the national and provincial government to overcome the crisis.

- On November 11th last year the TAC sent representations to the National Director of Public Prosecutions, Mr Mxolisi Nxasana, requesting him to drop the case against the 129. We are deeply disappointed that our request was turned down and that the unjust persecution of the 129 continues.

- The representations sent to the NDPP

- The response from the NDPP

- On 1st September TAC laid corruption charges against the MEC of Health, Dr Benny Malakoane. The full charge sheet can be downloaded

We live in a world where facts and fiction get blurred
In times of uncertainty you need journalism you can trust. For only R75 per month, you have access to a world of in-depth analyses, investigative journalism, top opinions and a range of features. Journalism strengthens democracy. Invest in the future today.
Subscribe to News24
Related Links
MPs shun TB testing at TAC gathering
Could legalising sex work stop HIV spread?
1 in 5 SA clinics short of HIV/Aids drugs
Next on Health24
Concerns over rise in acute psychiatric admissions in Western Cape