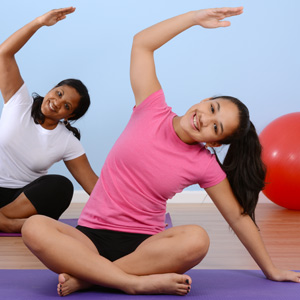 A nine-month after-school exercise programme helped young kids lose body fat and improve heart and lung strength compared to kids who didn't do the programme, according to a new trial.

It's clear that activity is good for kids, lead author Naiman A. Khan told Reuters Health. But he was surprised at just how much of a difference this programme made.

"We saw their overall body fat, abdominal fat go down, and in the absence of the programme kids actually increased in overall body fat," said Khan, from the University of Illinois at Urbana-Champaign.

For their study, the researchers randomly divided 220 kids ages eight and nine into two groups. One group participated in the FITKids programme, which includes 70 minutes of moderate to vigorous physical activity five times per week for nine months, and the other group did not.

In the exercise group, kids did 20 to 25 minutes of health-related fitness activities plus 50 minutes of organised non-competitive games meant to keep their hearts beating at 55 to 80% of their maximum heart rate. That's higher than most previous exercise studies have aimed for, which may be why this study got such good results, according to Dianne Stanton Ward of the University of North Carolina Gillings School of Global Public Health in Chapel Hill.

Ward studies obesity prevention in children. She was not involved in the new research. During exercise, kids wore heart rate watches so the researchers could monitor their activity levels.

After nine months, the kids in the exercise group had lost an average of close to one percent of their total body fat and more than one percent of the fat around their belly area, as reported in Paediatrics. Both kids who were a healthy weight and overweight or obese kids lost fat mass, but overweight or obese kids tended to lose a bit more relative to their starting size.

Kids in the comparison group gained a small amount of fat over the nine-month period, and didn't get any more or less fit. The researchers "did a lot of things right in this study", including measuring physical fitness as well as body composition, Ward told Reuters Health.

The results indicate that staying active at this age influences the development of body fat and produces measurable changes in physical fitness. "And the kids must have had fun, because they didn't have to do this," she said, noting that few kids skipped days of the programme.

"It doesn't really matter the particulars of what the kids are doing as long as they get up to a moderate or vigorous heart rate," Ward said. Better fitness means a healthier heart and increased bone density, too, she said.

"As kids move up from the pre-pubertal age, sedentary pursuits often take over and their willingness to be involved in active pursuits is reduced," she said. That can lead to greater weight gain later on.

Less and less activity in school

It would be reasonable for policymakers to put more emphasis on physical education (PE) classes or for more after-school programmes to make time for physical activity, she said. "The recommendation is that children get at least 60 minutes of activity per day, but those don't have to occur at the same time," Khan said. "It could be incorporated throughout the school day."

The curriculum used to develop the FITKids program was originally designed for use in PE classes, Ward noted. FITKids has been available for kids in Illinois for six years and is still an option for kids in that area.

There are likely similar after-school options in other areas of the country, Khan said. "We know children are getting less and less activity in school," he said. But no matter where it happens, he added, "Providing children with opportunities to be physically active is beneficial to their health."

We live in a world where facts and fiction get blurred
In times of uncertainty you need journalism you can trust. For 14 free days, you can have access to a world of in-depth analyses, investigative journalism, top opinions and a range of features. Journalism strengthens democracy. Invest in the future today. Thereafter you will be billed R75 per month. You can cancel anytime and if you cancel within 14 days you won't be billed.
Subscribe to News24
Related Links
Kids have exercise limit
Active video games help obese kids lose weight
Family activities good for kids' emotional health
Next on Health24
Microplastics seeping out of baby's bottle, study shows