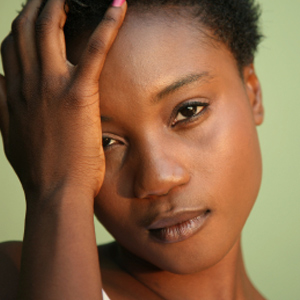 "My mother began to flatten my chest when I was 11. Every evening, she heated a stone in boiling water and pressed it on my breasts," the 31-year-old remembered, her anger still written all over her face.

Dressed in a plain T-shirt that betrayed her flat chest, Nana recalled the physical abuse and humiliation she endured throughout puberty: "I cried out in pain, while my aunts were holding me down."

By "ironing" her bust for years, her mother irreparably damaged Nana's breast tissue .

The practice of "breast ironing", in which mothers try to flatten their daughters' developing breasts with heavy, heated objects is common in Cameroon as well as in many other West African countries, including Nigeria, Togo, Guinea, Chad and Ivory Coast.

Some women use stones or pestles to prevent breast growth, while others pound the tissue with heated plantain peels.

In nations where teenage pregnancy and rape are rife, trying to forcibly eliminate signs of puberty to protect their daughters seems worth the pain to many mothers.

A quarter of girls fall pregnant under the age of 15 in Cameroon, according to 2011 government statistics, while an estimated 4% of women and girls are being raped.

In a society, where discussing sexuality with children is a taboo for cultural and religious reasons, mothers resort to methods that have serious implications on their daughters' health and psyche, according to Ndonko.

"They don't realise how traumatising breast ironing is," he said. "It's a very, very painful practice."

But behavioural patterns are hard to change and myths difficult to set straight.

Even today, Nana's mother, 52-year-old Emilienne, continues to believe the "benefits" of breast ironing outweigh the physical and emotional suffering it causes.

"I myself underwent breasts ironing. I did it to my daughter because I wanted the best for her," she told dpa.

In Cameroon, 12% of women have had their breasts ironed, according to a new study, for which GIZ surveyed about 6000 girls and women between the ages of 10 and 82.

Contrary to general assumptions, breast ironing is not an old tradition. "It's a social issue that is much more prevalent in urban than in rural areas. It originates from modern problems around sexuality," explained Ndonko.

The psychological trauma the practice induces is immense.

"Girls get to understand that it's not normal to have breasts, which has a long-term impact on their body image and sexual life," said Ndonko.

"More than half of the women we interviewed associate breasts with shame," he added.

Although Cameroon's ministry for family and women's empowerment classified breast ironing as a "violation of women's rights" in 2011, the government has not legislated against the practice.

80% of the women surveyed by GIZ said their breasts were permanently deformed by breast ironing. 9% said they had difficulty breastfeeding their babies.

"We have seen girls developing cysts, infections, deformation and dissymmetry of the breast and psychological illness," explained Sarah Ako, spokesperson of women's rights group National Network of Aunties, which works closely with GIZ in capital Yaounde.

More than 10 000 women across Cameroon have joined the network to fight for the rights of younger generations. They run educational campaigns in schools, churches and on national radio to mobilize against breast ironing.

The good news is that the campaign has shown success. The 12% of women suffering today from breast ironing represents a halving of the number in 2006, when an initial GIZ survey found that one in four women were affected by the practice.

"That's a positive trend. It's encouraging, but we'll only be happy when we have zero cases," said Ndonko.

Nana is one of the women who want to help break the cycle. As part of the Aunties network, she consults young women on issues relating to their sexuality.

Nana says she certainly won't flatten the breasts of her own daughter, who just turned 14: "I don't think it's a solution to prevent premature sexuality."

We live in a world where facts and fiction get blurred
In times of uncertainty you need journalism you can trust. For 14 free days, you can have access to a world of in-depth analyses, investigative journalism, top opinions and a range of features. Journalism strengthens democracy. Invest in the future today. Thereafter you will be billed R75 per month. You can cancel anytime and if you cancel within 14 days you won't be billed.
Subscribe to News24
Related Links
Dunlop and Dunlop zones pledge support for The Breast Health Foundation
Take these symptoms to heart
Breast Health
Next on Health24
Microplastics seeping out of baby's bottle, study shows