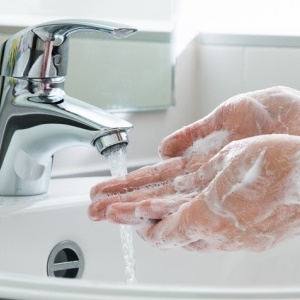 University of Arkansas researchers used video cameras to record the hand-washing habits of adults at an early childhood centre in the state.

Overall, only 22 percent of the adults followed proper hand-washing procedures before and/or after tasks such as wiping noses, emptying garbage cans, preparing food, and changing diapers, the study found.

Read: Your health is in your hands

The study results were published in the December issue of the American Journal of Infection Control.

"Hand-washing is an important component of reducing illness transmission among children in early childhood centers, especially for the adults in charge of their care," said study lead author Jennifer Henk, an assistant professor of human environmental sciences at the university.

"As we seek to improve overall quality in early childhood settings, our study shows the need to adopt creative strategies to increase hand-washing compliance and efficacy," she added in a journal news release.

Children under 5 years of age have only partially developed immune systems, increasing their susceptibility to communicable diseases, said Susan Dolan, president of the Association for Professionals in Infection Control and Epidemiology.

"Studies have shown that children who spend time in an early childhood care centre are two to three times more likely to acquire infections than children cared for in the home, with respiratory and gastrointestinal infections posing the highest risks," Dolan said.

Hand-washing can reduce children's risk of diarrhoea by about 30 percent and their risk of respiratory infections by about 20 percent, according to the U.S. Centres for Disease Control and Prevention.

Is there a hand-washing crisis in SA state hospitals?

We live in a world where facts and fiction get blurred
In times of uncertainty you need journalism you can trust. For 14 free days, you can have access to a world of in-depth analyses, investigative journalism, top opinions and a range of features. Journalism strengthens democracy. Invest in the future today. Thereafter you will be billed R75 per month. You can cancel anytime and if you cancel within 14 days you won't be billed.
Subscribe to News24
Related Links
Did you wash your hands?
Are you too polite for your own good?
Clean hands save lives
Next on Health24
Weight-loss surgery may reduce pregnancy complications