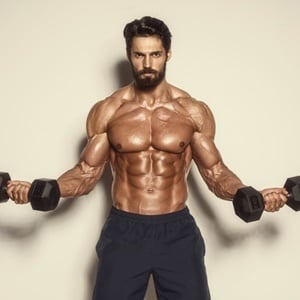 Steroids and testosterone may have unwanted side effects.

Men who abuse hormones such as testosterone or steroids for bodybuilding can have declines in sperm and testosterone production, researchers say.

The good news: these changes seem to reverse once men stop hormone overuse.

While the use of non-prescribed male hormones (androgens) has surged in many wealthy countries, there has been little research into their effect on men's reproductive function, including sperm production, testosterone and fertility, according to lead researcher Nandini Shankara Narayana. She's an endocrinologist at the University of Sydney and Concord Repatriation General Hospital in Australia.

The study of 93 men included 41 who were currently using testosterone or steroids; 31 who had used them three or more months before the study; and 21 healthy men who exercised regularly and did not use androgens.

Compared with men who had stopped using the hormones or who had never taken them, current users had significantly smaller testicles, on average, and lower sperm output, the study found.

Former users did not differ from men who had never taken the supplements in terms of sperm production and hormone levels, indicating complete recovery, according to the study presented Monday at the Endocrine Society's annual meeting, in New Orleans.

"These results will help endocrinologists involved in care of men who are using typically non-prescribed, high doses of androgens for bodybuilding, a practice that is increasingly recognised but for which virtually no prognostic information has been available to support medical care during recovery from androgen abuse," Shankara Narayana said in an Endocrine Society news release.

We live in a world where facts and fiction get blurred
In times of uncertainty you need journalism you can trust. For 14 free days, you can have access to a world of in-depth analyses, investigative journalism, top opinions and a range of features. Journalism strengthens democracy. Invest in the future today. Thereafter you will be billed R75 per month. You can cancel anytime and if you cancel within 14 days you won't be billed.
Subscribe to News24
Related Links
Anabolic steroids may tax the heart
Understanding steroids: Why so many Olympians are tempted to cheat
High testosterone levels bad news for the heart
Next on Health24
Breakthrough sheep study shows frozen semen is viable 50 years later