Can obesity in pregnancy raise cerebral palsy risk in kids? 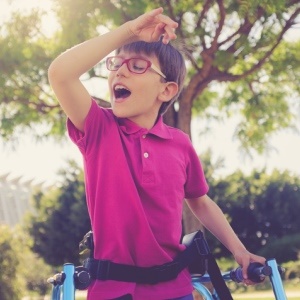 It's well documented that obese women face more medical complications during pregnancy, but now a new study has once again proven the importance of the correct weight for moms-to-be.

Women who are overweight or obese during pregnancy may be increasing the chances that their baby could be born with cerebral palsy, a new study suggests.

Children with cerebral palsy in South Africa, especially in poorer communities, are a particularly neglected group. Caring for a child with cerebral palsy involves many additional costs not associated with non-disabled children. The children also remain dependent on their mothers for feeding, bathing, dressing and toileting.

According to Stats SA the national disability prevalence rate is 7.5% in South Africa. Disability is more prevalent among females compared to males (8.3% and 6.5% respectively). Persons with disabilities increase with age. More than half (53.2%) of persons aged 85+ reported having a disability.

Twice the risk of cerebral palsy

Researchers looked at information on more than 1 million children born to Swedish women who were followed for nearly eight years.

"The overall risk of cerebral palsy was about two cases per 1 000 babies born," said lead researcher Dr Eduardo Villamor, a professor of epidemiology at the University of Michigan in Ann Arbor. "Women with the most severe forms of obesity who have babies born at full term may have about twice that risk."

Moreover, the prevalence of cerebral palsy has increased in children born at full term, he noted.

However, Villamor stressed that the study findings only show an association between a woman's weight during pregnancy and the risk of cerebral palsy, not that maternal obesity causes the condition. "Although the effect of maternal obesity on cerebral palsy may seem small compared with other risk factors, the association is of public health relevance due to the large proportion of women who are overweight or obese worldwide," Villamor said.

Cerebral palsy is a group of disorders that affect the ability to move and maintain balance and posture. It's the most common motor disability in childhood. The condition is caused by abnormal brain development or damage to the developing brain that affects the ability to control muscles, according to the US Centers for Disease Control and Prevention.

Many people with cerebral palsy also have other health problems, such as intellectual disability, seizures, issues with vision, hearing or speech, changes in the spine, or joint problems.

Overweight and obesity in early pregnancy may increase the risk for a number of complications and can adversely affect the health of mothers and children, Villamor said.

Some studies suggest that weight loss before pregnancy may decrease some of these risks, he said.

"Although we don't know yet if this also applies to cerebral palsy, weight loss before pregnancy among overweight and obese women may offer some health benefits during and after pregnancy," Villamor said.

"There continues to be evidence of many different repercussions and outcomes associated with being overweight or obese," said Dr Siobhan Dolan, a medical advisor at the March of Dimes.

"All the data is pointing to the same issue – that it's good to get to a healthy weight before pregnancy and to gain the right amount of weight during pregnancy," she said.

For the study, Villamor and colleagues collected data on more than 1.4 million children born in Sweden from 1997 to the end of 2011. More than 3 000 children were eventually diagnosed with cerebral palsy.

About 45% of the association between maternal weight and cerebral palsy in full-term children was seen in infants who had breathing complications, they added.

Maternal obesity as a risk factor

A cerebral palsy expert said maternal obesity isn't the only risk factor for the condition.

But environmental factors linked to obesity, such as high blood pressure, diabetes and hormonal abnormalities, might trigger a genetic predisposition for the condition, he added.

"As you are planning a pregnancy and entering pregnancy you want to be healthy," Roye said. Being at your best includes maintaining a healthy weight, avoiding smoking and alcohol and continuing to exercise, he said.

The time to lose weight is before you become pregnant, Roye stressed.

"It would be wrongheaded for someone, particularly after they became pregnant, to decide they are going to lose weight – that's not a good plan," he said. "You should be at your best and fittest before you go into the pregnancy."

We live in a world where facts and fiction get blurred
In times of uncertainty you need journalism you can trust. For 14 free days, you can have access to a world of in-depth analyses, investigative journalism, top opinions and a range of features. Journalism strengthens democracy. Invest in the future today. Thereafter you will be billed R75 per month. You can cancel anytime and if you cancel within 14 days you won't be billed.
Subscribe to News24
Related Links
Genes may play a role in cerebral palsy
Cerebral palsy: guide for parents
Video games help kids with Cerebral Palsy
Next on Health24
Aspirin may help prevent miscarriages