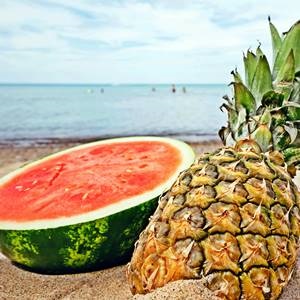 Is there such a thing as “sex drive foods”? Seems so. One study shows that vitamin C may increase libido in women. Another finds that people who eat foods high in vitamin C report better moods and have more sex. We’ll take that as another good reason to eat more vitamin C-rich fruits and vegetables.

Blood flow… where it counts

But there are many other sex and heart-healthy reasons to get enough of this antioxidant. It helps boost blood flow, meaning that both sexes can get friskier, faster. Something else to note, men who consume at least 200mg of vitamin C a day improve their sperm counts and motility, according to research at the University of Texas Medical Branch.

READ MORE: These Are The 4 Best Foods To Give Your Libido A Boost

In the study, 75 men aged 20 to 35 (all heavy smokers with poor sperm quality) were divided into three groups: two that took 200mg and 1 000mg of vitamin C, respectively, and a group that took a dummy pill. The daily vitamin C takers significantly improved the quality of their sperm, with the 1 000mg group showing the greatest boost in sperm counts. In a later study, 30 infertile men were able to impregnate their partners after just 60 days of vitamin C supplementation. In some men, fertility was restored in just four days. Vitamin C also keeps sperm from clumping, so they have a better chance of reaching their destination, says Dr Marc Goldstein.

So, which “sex drive foods” should I add to my grocery list?

When in the produce aisle, also pick up some watermelon. They are filled with high concentrations of the good-for-your-heart, good-for-sex phytonutrients lycopene, beta carotene, and, the big one, citrulline, which is particularly exciting for its ability to relax blood vessels, according to studies at Texas A&M University in the US.

Watermelon for the win

When you eat watermelon, the citrulline is converted into the helpful amino acid arginine. “Arginine boosts nitric oxide, which relaxes blood vessels, the same basic effect that Viagra has, to treat erectile dysfunction and maybe even prevent it,” explains Dr Bhimu Patil, director of the Texas A&M’s Vegetable and Fruit Improvement Centre.

READ MORE: 6 Superfood Powders That’ll Give Your Body A Boost

Patil says the citrulline-arginine relationship may be especially beneficial to people who suffer from obesity and type-2 diabetes because it may boost their circulatory and immune systems. You’ve known how to eat a watermelon since you were three, but there are other ways to enjoy summer’s sweet treat besides slurping and spitting seeds. Make a watermelon shake: put 1 cup seedless watermelon chunks into a blender, add 180ml plain Greek yoghurt, 1 teaspoon of either honey or agave sweetener and 6 ice cubes. Blend well. Makes one serving.

We live in a world where facts and fiction get blurred
In times of uncertainty you need journalism you can trust. For 14 free days, you can have access to a world of in-depth analyses, investigative journalism, top opinions and a range of features. Journalism strengthens democracy. Invest in the future today. Thereafter you will be billed R75 per month. You can cancel anytime and if you cancel within 14 days you won't be billed.
Subscribe to News24
Related Links
3 signs you should talk to your doctor about your low sex drive
Why older women have less sex: It's not as simple as you think
'Male pill' makes another advance, researchers say study shows libido will be preserved
Next on Health24
How to amp up the quality of your sex life