Self-lubricating latex could boost condom use 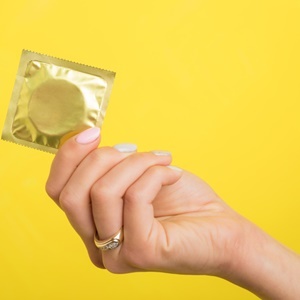 A perpetually unctuous, self-lubricating latex developed by a team of scientists in Boston could boost the use of condoms, they reported in the journal Royal Society Open Science.

Protective sheaths made with the specially treated membrane take on a slick and slippery quality in the presence of natural bodily fluids, lab experiments showed.

And unlike water- or oil-based lubricants added to commercially available condoms, the hydrophilic — or liquid-loving — latex retains its "slippery sensation" almost indefinitely.

"A majority of participants — 73% — expressed a preference for a condom containing the lubricious coating, agreeing that an inherently slippery condom that remains slippery for a long duration would increase their condom usage," the study concluded.

"Such a coating shows potential to be an effective strategy for decreasing friction-associated pain" — for women and men — "and increasing user satisfaction."

Condoms prevent pregnancies and the spread of sexually transmitted diseases. Some are made of lambskin but most are synthetic, manufactured from latex or polyurethane.

Without lubricants, however, all of these materials will chaff during "repeated articulations", the term of art used by the researchers to describe thrusting motions. Added emollients wear off with use.

Discomfort during intercourse and reduced pleasure — noted by 77% of men and 40% of women in a nation-wide survey in the United States — are often cited as reasons for not using condoms at all.

Researchers at Boston University led by Mark Grinstaff addressed these problem by adding a thin polymer coating of moisture-activated molecules that entraps liquid rather than repelling it, as latex does.

Yet to be approved by FDA

The polymer-treated condoms did not affect the latex, and "provides consistently low friction even when subjected to large volumes of water, or 1 000 cycles of articulation," the study reported.

In touch tests, volunteers expressed a strong preference for condoms that were "inherently slippery" and remained so for a long time.

Because the material has yet to be approved by the US Food and Drug Administration (FDA), the liquid-loving latex has yet to be tested during intercourse.

But more than 90% of the volunteers said they would consider using the coated condoms, and more than half said they would likely use condoms more frequently if the perpetually slippery ones were commercially available.

We live in a world where facts and fiction get blurred
In times of uncertainty you need journalism you can trust. For 14 free days, you can have access to a world of in-depth analyses, investigative journalism, top opinions and a range of features. Journalism strengthens democracy. Invest in the future today. Thereafter you will be billed R75 per month. You can cancel anytime and if you cancel within 14 days you won't be billed.
Subscribe to News24
Related Links
What is condom snorting – and just how dangerous is it?
SEE: How much liquid can a condom hold?
Do condoms really expire? Here’s what you should know
Next on Health24
'Condoms are everywhere, but young people don't like them'