The causes of back problems 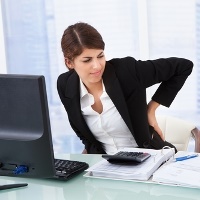 Your back is one of those things you take for granted. It must just do its job. Until one day you wake up and you can hardly move.

The bad news is that backache isn't something that just happens to other people. Almost eighty percent of people will suffer from backache at some stage of their adult lives according to Ina Diener, President of the South African Society of Physiotherapy.

But only 15% - 20% of people with back pain have tumours, inflammatory diseases or infections. The rest suffer from back pain resulting from incorrect posture while sitting or standing, picking up heavy objects incorrectly and a lack of exercise to strengthen the back and stomach muscles.

What exactly causes back problems?

At home
People who bend to pick up something and turn while doing so, often put their backs out. A typical scenario is someone picking up a child and putting it on the hip, or turning while picking up a heavy box, or bending down to help the family dog into the car. If you are not used to doing physical labour of this kind, and you suddenly decide to move a heavy cupboard by yourself or cart around boxes of books, you're looking for trouble. Many backs also show the strain when someone slouches on the couch – especially after hectic activity such as mowing the lawn.

In the office
Many backs show the strain when someone sits for a long time in a position where the knees are higher than the hips – this puts pressure on the back. Slouching on the couch may temporarily relax you, but it puts real strain on your back. People sitting for long periods of time behind desks also often develop back problems.

Studies have shown that almost no one who does a desk job escapes without running into back problems at some time during their lives. Weak stomach muscles cause the pelvis to be pushed too far forwards and the back forms an unnatural bend to compensate. Women who wear high heels and people who stand for a long time also often do not keep their backs straight.

Hard labour
People who do repetitive production work, who have to remain in hunched positions for long periods of time or who have to pick up and carry heavy objects in the line of their work, often injure their backs. Those who are on their feet all day, like teachers and cashiers are also at risk, as are people who walk around a lot in their jobs.

Incorrect driving posture, especially in taxi drivers and long-distance truck drivers, can also result in back problems. Sixty percent of normal motorists also complain of backache after a long journey.

So what can people do to prevent back injuries?
If incorrect posture, a sedentary working life or excessive stress causes 80% of back injuries, then there must be things that can be done to prevent this agony that many people experience. The good news is that there are quite a few things you can do to stop yourself from being doubled up with back pain for days.

The following tips come from the South African Society of Physiotherapy:

We live in a world where facts and fiction get blurred
In times of uncertainty you need journalism you can trust. For 14 free days, you can have access to a world of in-depth analyses, investigative journalism, top opinions and a range of features. Journalism strengthens democracy. Invest in the future today. Thereafter you will be billed R75 per month. You can cancel anytime and if you cancel within 14 days you won't be billed.
Subscribe to News24
Next on Health24
Heal trauma with eye movement

Read more on:
back painworkplacemusculoskeletallocalinternational
Newsletters