Two sisters have converted a ‘boxy’ 1950s home into a gorgeous contemporary abode that lets their beloved artworks shine. A bookcase from The Modernist and a traditional Mary Magdalene painting create a beautiful nook in the lounge.

Paula de Oliveira always wanted to live in the bustling Johannesburg suburb of Parkhurst with its various cafés, art and décor stores, and village vibe.

She was keen to buy a “fixer-upper” in this old neighbourhood – one that she could put her personal stamp on and truly make her own. When she and her sister Sandra found a 1950s home with three bedrooms in 2007, it had both their names written all over it as “literally everything was wrong with it”, Paula recalls with a laugh. “We knew from the start that structural changes were inevitable in order to open up the space, but all the plumbing and electrical wiring was also in need of replacement and the garden had to be reworked from scratch,” says Sandra, with whom Paula now shares this living space.

But this did not deter the sisters – they were excited at the prospect of creating flow between the indoors and outside and they planned to add French doors to every single room in the house to achieve exactly that. The open-plan lounge and dining room boast an eclectic mix of furniture and accessories with the Robin Sprong wallpaper creating a focal wall in contrast to the neutral base palette. The yellow cabinet is from an antique store that has since closed down. Leather chairs from Sevens Furniture

• Plan your home around your day-to-day needs – we had to accommodate our dogs, as they’re part and parcel of our family.

• Decorate with pieces that speak to your soul – and allow the walls to work as a blank canvas to really show off your artworks.

• Shop around; there are good deals to be found by those who are patient.

• Stick to your budget and take your time so that you don’t overspend. Our renovations took years to complete, but it’s not a race and sometimes money is tight. With its soft grey, white and natural wood palette, the kitchen is cosy and inviting, while the stainless steel touches add a contemporary look and feel. Pendants from The Modernist

Paula and Sandra wanted to create a cosy atmosphere in the kitchen. They called in the help of Eazyway Kitchens & Boards to turn their ideas into reality. “We wanted an eclectic mid-century design; I went Google mad and used bits and pieces from various kitchen layouts to settle on the final look,” explains Sandra. “It was difficult to finalise this space as Paula was in Paris for work and we had to communicate via email in order to discuss photos and ideas.”

In the end, they couldn’t be happier with the result. The round table adjoining the island, as suggested by Eazyway Kitchens & Boards , is a hit as the sisters didn’t want to go the conventional route with an ordinary square kitchen table.

As in the other rooms in the house, two aluminium French doors were added and these connect the kitchen with the garden. “What we enjoy most about the kitchen is the seamless indoor-outdoor feel – we can prepare meals, have a chat and play with the dogs at the same time,” says Sandra. 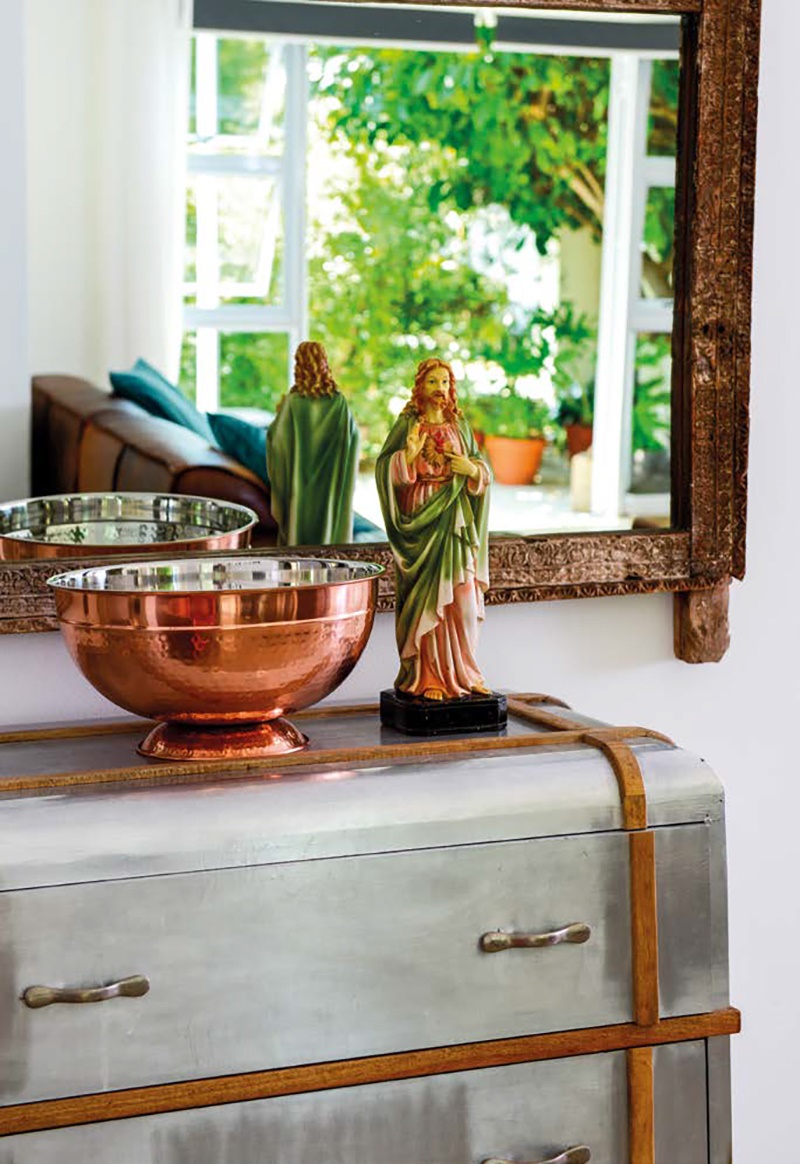 The entrance hallway is charming with its striking steel cabinet and mirror with wooden frame from Weylandts. In the first few years after moving in, structural changes were made as time and budget allowed. This included breaking down various internal walls and swapping rooms around to better the flow. “The previous kitchen became a bedroom so that all the bedrooms would be in one zone,” explains Sandra. “And the old main bedroom was converted into the kitchen to improve the flow between the lounge, dining room and kitchen.”

In addition to the structural changes, all the rooms including the bathroom and old kitchen were completely gutted so that the sisters literally had a blank canvas to work with. They decided from the outset to keep the palette neutral – with screed floors and white walls to maintain the concept of a blank canvas.

“The screed floors work so well because we’re dog fanatics and have four pooches at present,” says Sandra. “They really make the upkeep much easier. We decided to leave the walls white in keeping with the new light and airy feeling we were aiming for and since both Paula and I love colour, we felt the house should serve as a backdrop for our art pieces.” The Parisian-style wallpaper from Hertex in Paula’s bedroom features buildings, cafés and the Eiffel Tower. Furniture from Weylandts

The sisters describe their décor style as “mid-century eclectic” with a neutral palette and splashes of bright colour. “We only completed the look about two years ago as we wanted to get all the renovations done first,” explains Sandra. “We felt that attention to detail in the décor is what costs the most and we really wanted to wait for exactly the right pieces before we bought anything for our home – it took us several years!” says Paula.

Paula’s work often sees her in Paris and Madrid and whenever Sandra visited her there, the two of them would travel together in search of interesting works of art.

“Of the two of us, Paula is the ‘artist’; she has this amazing ability to mix and match pieces in the most untraditional way, although Lieb Wessels of Mr Handyman Plus played an integral role in helping us display all our various artworks,” says Sandra.

While the base palette remains neutral, wallpaper was introduced in various rooms to create focal walls, such as the Robin Sprong wallpaper with palm trees in the living area. “We adore the colour that this wallpaper brings into the otherwise neutral lounge and dining room and it really is a talking point for guests,” says Sandra.

We live in a world where facts and fiction get blurred
In times of uncertainty you need journalism you can trust. For 14 free days, you can have access to a world of in-depth analyses, investigative journalism, top opinions and a range of features. Journalism strengthens democracy. Invest in the future today. Thereafter you will be billed R75 per month. You can cancel anytime and if you cancel within 14 days you won't be billed.
Subscribe to News24
Related Links
Co-ownership without conflict
The art of living
Drab lounge now serene sanctuary
Next on Home
An efficient use of space in a contemporary cottage-style house