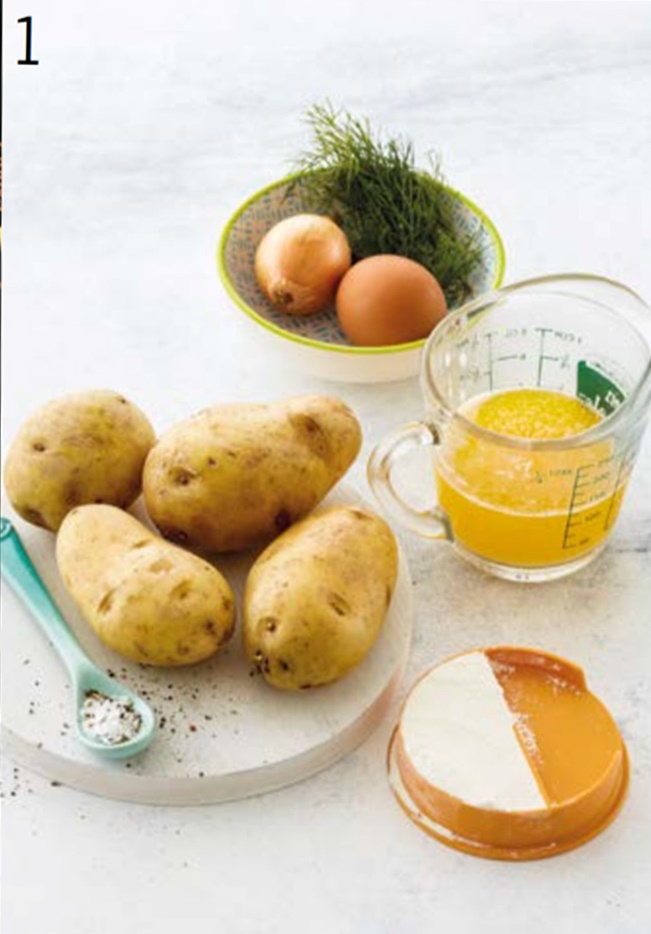 1. Get the ingredients ready You’ll need four medium-sized Mediterranean potatoes (about 350g), an egg, a small onion, a bunch of dill or your favourite soft herb, about 50ml flour, salt and pepper and melted butter* for frying.

*Why melt the butter?

Latkes fried in butter are delicious but because ordinary butter has a fairly low smoke point, it tends to brown very quickly in the pan.

One way to increase the smoke point is to add a dash of oil to the butter. Alternatively, the butter can be clarified; this allows the water it contains to evaporate and separates the milk solids from the butterfat, producing better results at a higher temperature.

Make your own by melting a chunk of butter (unsalted butter is preferable) in a measuring cup in the microwave and then skimming off any milky foam on top. The rest will separate into clear butterfat and milk solids – the latter will settle at the bottom. Use the top clarified butter for frying. 2. Peel the potatoes and onion; grate coarsely in a mixing bowl lined with cheesecloth or a clean tea towel.

Tip: Replace one of the potatoes with the same amount of grated sweet potato, baby marrow or even pumpkin as a variation.

3. Using the cloth, squeeze out all the moisture from the vegetables – this improves the texture of the latkes when they are fried. 4. Place the dried vegetables in a clean mixing bowl and add the herbs, egg, flour, salt and pepper to taste. Mix to form a thick batter.

Serve your latkes just as they are or with smoked trout and cream cheese; avocado, gherkins and cherry tomatoes; or smoked ham and lemon wedges.

These two delicious fritters, both with grated potatoes as the main ingredient, look much the same but differ slightly. Accompaniments such as crispy bacon, grated onion, cheese and fresh herbs go well with both!

• Latkes are made from raw potato, binding agents such as flour (sometimes Matzo meal) and egg. They are traditionally shaped as small fried fritters and eaten with apple sauce during the Jewish celebration of Hanukkah.

• For rösti, the potato is usually parboiled. It is of Swiss-German origin and is served in the form of small fritters or as a pan-sized cake cut in slices.

We live in a world where facts and fiction get blurred
In times of uncertainty you need journalism you can trust. For 14 free days, you can have access to a world of in-depth analyses, investigative journalism, top opinions and a range of features. Journalism strengthens democracy. Invest in the future today. Thereafter you will be billed R75 per month. You can cancel anytime and if you cancel within 14 days you won't be billed.
Subscribe to News24
Related Links
Aartappelgebak met uiebolaag
Aartappelkoek
Roosaartappels
Next on Home
Easy kimchi