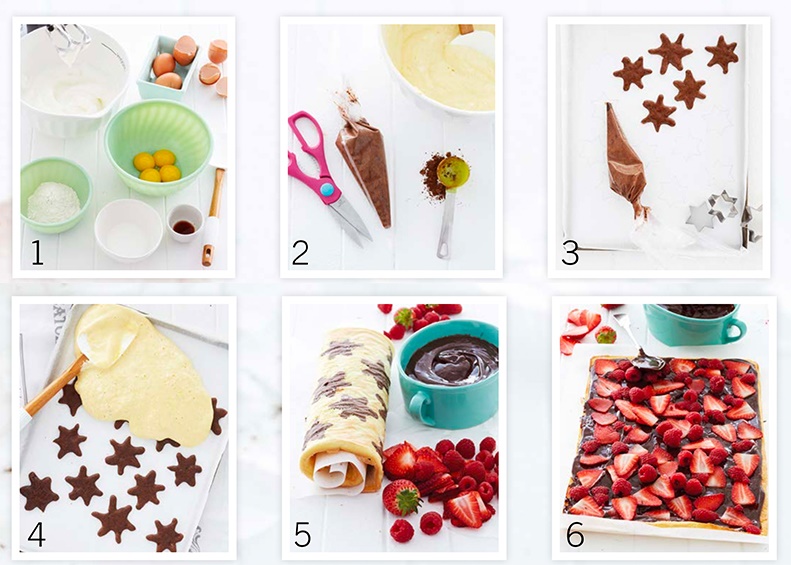 1. Preheat the oven. Whisk the egg whites until they form soft peaks; add the white sugar and whisk until the mixture forms stiff peaks. Now whisk the egg yolks, castor sugar, vanilla essence and salt in a separate bowl until light.

2. Fold the flour and egg whites into the egg yolks until just combined. Don’t mix too much – try to retain as much of the air as possible. Spoon out 300ml of the batter and mix with the cocoa. Spoon this chocolate batter into a piping bag.

3. Line a 28 x 36cm baking tray with a sheet of plain white paper and, using a pencil, draw a star on the paper (use a cookie cutter as a template). Cover with a sheet of transparent baking paper and spray with non-stick spray. Cut the piping bag open and ‘colour-in’ the stars with the chocolate batter, following the pattern on the bottom sheet.

4. Bake the stars for 2 minutes. Allow to cool for 5 minutes and then spread the vanilla batter over the baked stars. Smooth it out evenly and bake for a further 12 minutes.

5. Turn the cooked Swiss roll out onto a clean chopping board while it is still warm and carefully remove the baking paper. Turn the cake over again and place it, star side down, on a new sheet of baking paper (or a clean tea towel) sprinkled with castor sugar. Using the paper to help you, roll it up carefully. Leave it to cool rolled up – this prevents the cake from cracking when you add the filling. Heat the cream for the filling to just below boiling point, pour over the grated chocolate in a mixing bowl and stir until melted. The filling should be thick, glossy and spreadable.

6. Carefully roll open the cake, spread a thick layer of chocolate on the inside and sprinkle a layer of berries over that (cut the strawberries and bigger berries smaller if necessary). Roll the cake up and serve on a pretty platter.

Other filling ideas
Classic Swiss roll fillings include jam and cream or caramel; but with all the Christmas ingredients available, you can get creative with crumbed fruit mince pies and chocolate, leftover tiramisu cream or even softened ice cream. Use your imagination!

We live in a world where facts and fiction get blurred
In times of uncertainty you need journalism you can trust. For only R75 per month, you have access to a world of in-depth analyses, investigative journalism, top opinions and a range of features. Journalism strengthens democracy. Invest in the future today.
Subscribe to News24
Related Links
Hummingbird cake
Cheesecake brownies
Baked rainbow cheesecake
Next on Home
Hummingbird cake

See all newsletters
Our latest Issue
In December | January's Home...