Caren and Dave are thrilled with their boma under the trees. They have always enjoyed camping next to the river on their farm, but now they can cook and socialise in comfort. Table from Holly Wood Furniture; dining chairs and bar stools from Cielo; kitchenware from Le Creuset, CulinaryKraft and Yuppiechef; fridges from Takealot; sinks and taps from The House Shop

WHERE Witkrans Farm, about 68km from Beaufort West A retaining wall was built to protect the boma from flooding and this created the ideal spot for a fire pit on the lower level closer to the river. Animal hides from Montebello Design Centre

The vision for this gorgeous boma took shape around a campfire. But unlike those pipe dreams discussed under the stars late at night, this one came true.

The Mills family of Witkrans Farm outside Beaufort West often camp on the banks of the river on their farm and dreamed of having an outdoor kitchen there to make things easier. “When you wake up in the morning to the sound of the river, the birds in the trees and sometimes the call of the lookout baboon, you really feel part of the farm,” says Caren. “Dave and I wanted a kitchen by the river that would become a central hub where everyone can cook delicious food, relax and tell stories around the campfire.”

But that self-same male baboon and his troop, as well as vervet monkeys and other wild animals, made the idea of an outdoor kitchen problematic. “The animals often come to the campsite when we’re not here – the baboons and monkeys during the day and the porcupines at night – and they raid whatever they find! We spent many days discussing our options,” says Caren. The people who were sitting around the campfire that night when Caren and Dave started formulating their ideas were Vince and Ronelle Muir, the owners of Holly Wood Kitchens. Talk about the right people at the right time!

“We discussed our needs and the different ways to create what we wanted. One of the major factors was that it had to be able to withstand wild animals. A container was the obvious way forward. Apart from the fact that it can be completely closed up, the container could be kitted out in Cape Town and then simply brought here. Once the seed had been planted, the concept just grew and grew!” When Vince describes the “simply brought here” process, it seems that this might have been the most difficult part of the project.

The container was transported by truck from Cape Town to Beaufort West and then over the last 60km on a dirt road to the farm. He says they tackled the last 20m like the ancient Egyptians: “The container was placed on poles by the truck’s crane and then we rolled it over them into position.”

We look forward to making lots of memories here! – Caren The back wall has space for a fridge, pantry, rubbish bin, cupboards and drawers, plus slots for chopping boards and trays. 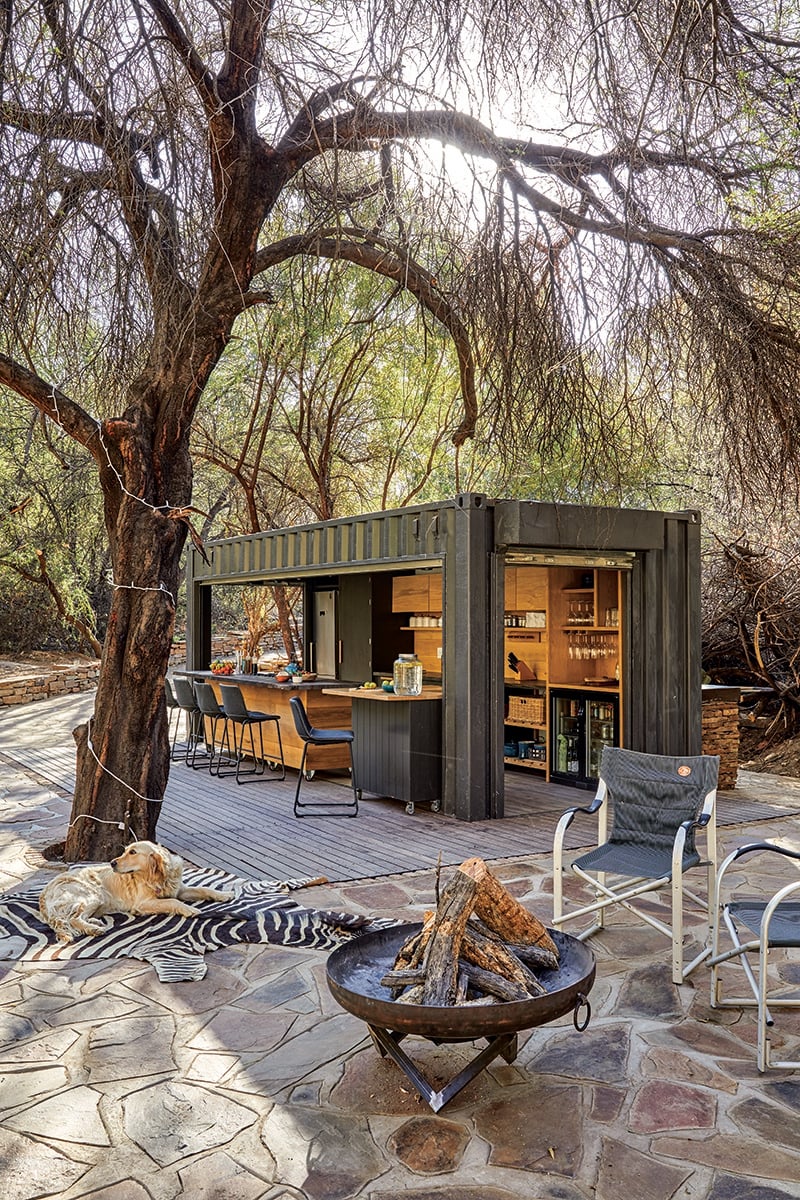 The bar area has a bar fridge and an L-shaped bar counter. The island is 3m long and 1m wide, with gas plates on one side and a stove underneath. The counter can accommodate five bar stools. Fire pit from The Firepit Company

The container is situated in the shade of karee, poplar and acacia trees next to the Krom River.

Unlike large parts of the Great Karoo with its vast open plains, the farm boasts impressive cliffs. This area is covered with sweetveld grass so the game thrives, while the river provides plenty of water.

“We carefully cleared the surrounding bush and had the ground levelled; our incredible builder, Wijnand Millard, prepared the site meticulously,” says Caren.

Vince provided a sketch of where to prepare the foundation and where the concrete blocks had to be placed for the four corners. Pipes for water and electricity were laid underground.

“Dave loves detail and kept everyone up to date with endless lists,” explains Caren. “The entire boma – which includes the kitchen, the lounging area, a hot tub and the fire pit – is integrated so that it never feels as if one area is separate from the other.

“And because the Karoo has a lot of fine dust, we decided to create a proper floor – it’s a combination of a wooden deck and stone paving.”

A retaining wall provides protection against flooding when the river is in full flow. “As a bonus, there was space below the wall for our braai pit,” says Caren. “We’re so happy with the way everything has turned out.” The container doors were removed and an opening was cut for a roller shutter. Vegetation was removed and the ground levelled when the site was being prepared. A truck delivered the container and it was offloaded on the farm by means of a crane. Everybody helped to get the container onto steel pipes so it could be rolled further. A digger-loader pushes the container into position... ..and then muscle power is harnessed to roll it over the pipes to the foundation. The hardwood deck is level with the container floor; this facilitates sliding the mobile island out. A stone floor was constructed next to the deck. Storage space for chopping boards and trays is standard in most Holly Wood Kitchens designs. Blue pots from Le Creuset The concrete slab in front of the container (first photograph) slopes to ensure that rainwater runs off to the stormwater pipe (second photograph). Josh watches the birds in the trees. Beanbag from Fatsak

He cautions that if shipping containers are not treated or maintained, they may rust. “They spend a lot of time at sea, so there might be rust spots. These must be repaired before the conversion begins,” he says.

The container, both inside and out, was painted in a charcoal colour with the same paint that is used on new shipping containers to protect them from conditions at sea. The floor was covered with oak-patterned vinyl, the main work surfaces are Dekton in the colour Trilium and the bar counter is white oak. “We also used solid white oak for the splashback.

“To regulate the temperature, the walls and ceiling were lined with 50mm-thick Chromadek insulation panels. These were also painted a charcoal colour.” The benefits of having a container

• If you move, you can take it with you.

• You can add more containers next to an existing one or on top to enlarge your space as your needs change.

• Containers can easily be transported; after all, they are designed to fit on a standard truck.

• Converting a container into different rooms such as a kitchen or bedroom, or turning it into a complete home, can be considerably cheaper than building according to conventional methods.

• A container can be converted into a kitchen or bathroom beforehand and then transported to its destination. In the case of the Witkrans kitchen, the condition of the road was poor, so the installation had to be done on the farm.

We live in a world where facts and fiction get blurred
In times of uncertainty you need journalism you can trust. For only R75 per month, you have access to a world of in-depth analyses, investigative journalism, top opinions and a range of features. Journalism strengthens democracy. Invest in the future today.
Subscribe to News24
Related Links
Building with containers
Next on Home
Fix it with Flair: Meet our ‘Most Beautiful’ category winner

See all newsletters
Our latest Issue
In December | January's Home...