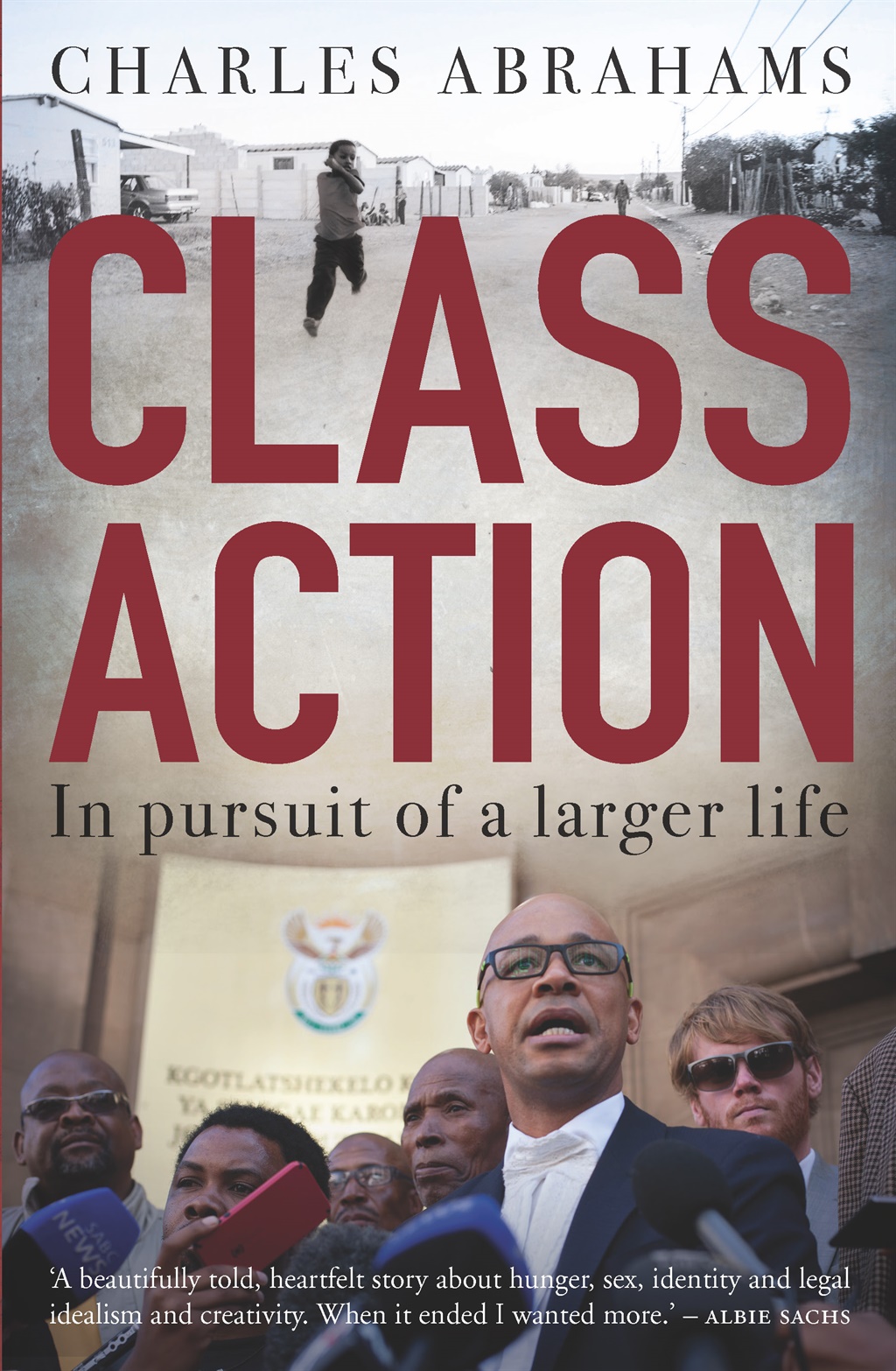 The year 1985 was to me what 1976 was to those who participated in the student uprising. It brought thousands of us onto the streets armed only with stones and tyres. At school, every time we heard the signal 'Casspir', we'd go befok and storm out of our classes to take up positions alongside the advance scouts, whose task it was to watch for Casspirs from the school's front gates. They were the brave and adventurous ones, although they also used the opportunity to bunk classes.

Francois and the other student leaders strategised and planned the course of protest action. They engaged teachers and the principal, called mass meetings and decided when classes would be interrupted. During this time, two movements emerged at school – those who believed in education before liberation and those who supported the call for liberation before education. Francois belonged to the latter group, who were influenced by the 1976 student uprising and were prepared to risk it all for the sake of liberation. But his stance pitted him against his namesake, Francois Groepe.

Groepe was 'die mees voorbeeldige skoolseun' (the most exemplary schoolboy) who took his schoolwork very seriously. He was an ardent supporter of education before liberation, whereas Francois wanted Bantu education abolished and replaced. Groepe believed pupils had to work within the system, and urged them to return to class. While most teachers scorned Francois and adored Groepe, most pupils were distrustful of Groepe's exemplary ways.

Not only was I faced with choosing between these two extremes, but my mother's anguish deeply troubled me too. 'Ai, my kind,' she sighed, 'ek hoop jy gaan matriekeksamens skryf en die familie trots maak.' (Oh, my child, I hope you're going to write matric exams and make the family proud.) This put me in an existential crisis – to write or not to write? To write meant making the family proud as its first matriculant, but turning my back on the call to boycott the matric exams. Worse, I had to choose between my mother and my brother. Fortunately, the answer became clear early one morning when there was a frantic knocking on our front door.

Before I could utter a word, my parents were in the lounge, having been woken by the noise.'

Wat gaan aan? Wat soek julle hier?' my mother yelled. (What's going on? What are you doing here?) At the time, she was pregnant with Lorenzo.'

Francois appeared before they could search the house. 'I'm Francois,' he said in a cool, calm voice, as if he'd known that his political activism would lead to his arrest.'Ons kom om jou te arresteer,' said the captain. (We've come to arrest you.)When my mother heard those words, she broke down in tears.

Once Francois had gathered some clothes, they escorted him to a police vehicle, where a contingent of police and military personnel waited for him. I held back my tears while I comforted my mother. 'Don't worry, Mommy, he's strong. He'll be okay.' I had no idea where they would take him, though. Meanwhile, my father left for work without saying a word.

That morning, news of the arrest spread across the school. Some teachers and other SRC leaders had also been arrested. It was chaos.

Pupils were reluctant to go to class; they wanted action. With many of the SRC's leadership arrested, we looked to those left behind: Athol Williams, who'd allegedly spat in Jumbo's face; Mario Byneveldt, whose brother was also involved in student politics; Eric Alam, who was just gatvol with the system; Fergus Pienaar, the head boy who wanted to lead by example; Allen Aubrey, who always had transport; and me. With Francois incarcerated, how could I not step forward and lead the pupils? An injury to one was an injury to all.

With the matric exams close at hand, the question of whether to write or boycott had turned into a highly personal and political issue. On the morning of the first exam, a number of Casspirs arrived at school along with a heavy presence of gun-toting police and army personnel. Their purpose was to transport pupils to the examination centre. One by one, those matrics who had opted to write sheepishly made their way into the Casspirs. The rest of us watched from the school's parking lot.

Once the Casspirs had gone, we jumped into action. A huge protest gathering was to take place in Athlone, and we planned to attend. In anticipation, we'd prepared pamphlets to honour our teachers and fellow pupils who'd been arrested and detained. Allen Aubrey had secured a car; the rest of us packed it to capacity and we set off in a buoyant mood.

We drove along Lavis Drive before turning into Modderdam Road (now Robert Sobukwe Road). From where I sat, squashed in the back seat, I noticed that Allen kept looking in his rear-view mirror. I didn't make much of it until he said, 'Guys, we've got company.' I knew then that we had trouble; it could only be the police.'

I thought about all the pamphlets on my lap and started to sweat, frantically searching for places to hide them – under the front seats, under the carpets, wherever I could find a hole. But our big worry was the pamphlets in the boot.

Just as we were about to turn onto the highway, the police siren went off. 'Pull off! Pull off!' a voice commanded. Allen brought the vehicle to a stop. Everyone was quiet, not knowing what to do or expect. The police cautiously approached the car and ordered us out. Passing vehicles slowed down to see what was going on.

'Waarheen is julle op pad? Is julle nie veronderstel om in die skool te wees nie?' (Where are you off to? Are you not supposed to be at school?)

We looked at each other, not knowing what to say, but before anyone could reply, they discovered the pamphlets. 'See what we've got here!' It was game over: we were arrested and taken to Manenberg Police Station, where I encountered the same Captain Laubscher who had arrested Francois a few days earlier.

'Bingo!' he shouted when he saw me. 'My day is made. I should have arrested you when I arrested your brother. It would have made my work easier.'

They detained us for the night, then took us to Victor Verster Prison in Paarl. From the time we set foot in Victor Verster, it felt as if we'd arrived at one big family gathering. Young and old hugged us warmly. 'Welcome, comrades! Welcome!' they shouted as we made our way with our prison blankets into a huge communal cell of about fifty detainees. The atmosphere was euphoric and comradely and didn't feel like prison at all. Instead, it felt as if everyone was on some compulsory break from street protests.

Later that day, we mingled with other detainees in the forecourt. Big student and activist names like Trevor Manuel, Cecil Esau and Christmas Tinto were there, some with us and others in isolation. As I walked around, I heard a familiar voice shouting, 'Charles! Charles!' And there was Francois, running in my direction. 'Wat maak djy hier?' he shouted. (What are you doing here?) We hugged and spent the rest of the day together.

If ever P.W. Botha, then president of South Africa, did anything that had good consequences, it was bringing all of us together in one place. Victor Verster became a gathering of activists from different political persuasions, where ideas were exchanged amid heated discussions, while some plotted the way forward.

In one corner you had the ANC-aligned groups or the Charterists, as they were called (after the Freedom Charter), while in another corner were those from the Azanian People's Organisation (AZAPO) and the PAC-aligned groups, known as the Africanists. In between, you had the smaller groups, such as the African People's Democratic Union of Southern Africa (APDUSA), the Non-European Unity Movement (NEUM) and the New Unity Movement (NUM).

Some referred to the smaller groups as the armchair politicians, because they churned out Marxist–Leninist or Trotskyist ideas, but contributed little to political action.

With too little time to fully appreciate each political organisation's ideas and programmes, I moved from one corner to the other, listening attentively to the rigorous debates on the ANC's Freedom Charter, AZAPO's Azanian Manifesto and APDUSA's Ten-Point Programme.

These impassioned debates led to the occasional blow-up, and each group was eager to recruit young blood like me into their camp while warning me away from others. Even though I never joined any of the political organisations, I was impressed by the intellectual rigour and astuteness of the smaller groups, as they mostly outdid the bigger movements in political debates. But I was more attracted to the pragmatism of the established formations at the forefront of the struggle.

After two weeks, I was released. When I stepped out, I felt energised and invigorated, ready for the next battle. But back at home, a more familiar kind of politics awaited me. My mother had given birth to Lorenzo and my father was spending even more time at church. The wedge between them had grown bigger and the house was in turmoil, heading for an implosion. Most of the time, my eight younger siblings were at each other's throats, shouting, screaming and fighting, while the little ones cried for attention. I refereed where I could, separated those in conflict, and pandered to the smaller ones.

My mother was a physical and emotional wreck and barely had the energy to care for Lorenzo. Francois was held in detention for another two months, and I found myself unwillingly in charge of Bream Way's sinking Titanic. What a welcome back.

* This extract was taken from Class Action a memoir by Charles Abrahams (Penguin Random House) about his poverty-stricken youth on the Cape Flats.

We live in a world where facts and fiction get blurred
In times of uncertainty you need journalism you can trust. For 14 free days, you can have access to a world of in-depth analyses, investigative journalism, top opinions and a range of features. Journalism strengthens democracy. Invest in the future today. Thereafter you will be billed R75 per month. You can cancel anytime and if you cancel within 14 days you won't be billed.
Subscribe to News24
Related Links
BOOK REVIEW: Books paint contrasting pictures of Winnie Madikizela-Mandela
BOOK REVIEW: Denis Worrall and the brave anti-apartheid forces too often overlooked
Next on Life
INTERVIEW | Act of Oblivion: Robert Harris on his new novel, about ‘the greatest manhunt of the 17th century’