Each of our public holidays has a special meaning – a particular reason for its existence. Heritage Day, which South Africans celebrate every year on September 24, is no different. The day has been set aside to celebrate our diversity and culture.

As former president Nelson Mandela said: “When our first democratically elected government decided to make Heritage Day one of our national days, we did so because we knew that our rich and varied cultural heritage has a profound power to help build our new nation.”

The idea of heritage is a difficult one to define, but it is generally agreed that it includes things such as our languages. Often overlooked, these key identifiers of heritage are among the more important mediums through which our cultures are communicated.

Other aspects of heritage are the arts, our practices and our collective memories. This makes our heritage somewhat fluid – something that can be created or recreated, especially through the selection of information presented as public history.

Knowing where others come from – how each of us came to be where we are today – will help us create a collective memory and public history that unites us. There was a time when the storytellers and bards would relate our stories around fires, capturing us with magical tales of our ancestors.

The Our Story series takes up the role of those who kept our memories and helped us remember our past.

Whether you choose to attend a formal celebration this Heritage Day, or sit around a fire and braai, take a moment to think about the way our pasts are linked.

Maybe you can listen to the stories of your grandmothers or grandfathers, or read this extract about Chief Mzilikazi. 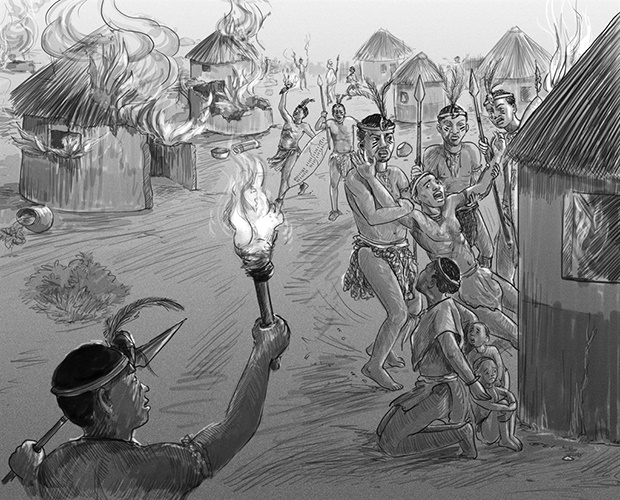 The story of the Great Bull Elephant, the ruler Mzilikazi, son of Mashobane and grandson of Zwide, is told over four titles in the Our Story series. In our first three, we found out that Mzilikazi was the forefather of the amaNdebele nation, and both the friend and rival of Shaka Zulu. As an emerging leader, he took his people far from KwaZulu-Natal to the rolling plains of Limpopo. We followed the great path of the roving conqueror as he travelled from the east of what we now call South Africa to the far west, and the effect he had on the people he met along the way. In the final chapters of his life, the great Chief Mzilikazi expanded his territory and led his people further than he could have imagined.

The fourth and final book in the series about Mzilikazi takes us on the last leg of his great road. The amaNdebele, also referred to as the Matabele in times past, still had a long way to go and many battles to fight. In this extract, read how Mzilikazi continues the long march of his people, struggles to keep the colonial forces at bay and is compared to Napoleon Bonaparte by a French missionary.

Mzilikazi’s attack on the Bangwaketsi set a pattern for future attacks on other tribes. The Matabele struck in the dead of night with flaming torches, driving the Bangwaketsi villagers out and murdering them as they fled. Not all of them were slaughtered, however, as the young men and women were captured. They would become warriors and mothers for the Matabele. During the day, the Matabele sent out their best warriors to continue the fight.

The javelins, battle axes and clubs of the Bangwaketsi would not hold up against the sturdy ox-hide shields and assegais of the Matabele, so they fled far west to the Kalahari desert, where thirst caused more suffering.

Eventually, the thirst even affected the Matabele who chased them. They turned back, collecting the scattered cattle along the way. The exiled Chief Sebitoane would later die in the dry desert of the Kalahari as the Matabele took control of the land.

Mzilikazi’s path of destruction would continue as he travelled west to defeat first the Bakgatla – the Baboon People – and then the Bakwena – the Crocodile People.

In five years, the Matabele had marched as far as the Kalahari. By then, Mzilikazi’s territory had grown very large. The only Bechuana community left in the area was the Bahurutsi.

Mzilikazi made it clear that he wanted to defeat them by the autumn, but was interrupted by the arrival of three white men from across the seas. In March 1832, three Frenchmen arrived at the village of Mosega on behalf of the Paris Evangelical Mission Society.

These men were Prosper Lemue, Samuel Rolland and Jean Pierre Pellissier, and they hoped to open up a missionary in the Bahurutsi territory. When they saw the wars that had ravaged the countryside, they decided to visit Mzilikazi’s friend Robert Moffat instead. They would wait with him in Kuruman until peace returned to the land.

During the next three months, they received letters from Paris demanding they set up the missionary station as soon as possible. When they learnt from Chief Mokgatla that there were no further invasions from Mzilikazi, they decided to leave Kuruman.

Mzilikazi had, however, heard of the French missionaries and invited them to his royal kraal to find out what they wanted. Pellissier thought this would be a good time to discuss starting a missionary station in the area, so he travelled to Mzilikazi’s kraal.

After a long journey, Pellissier arrived at enKungwini to visit Mzilikazi. In the letters he sent to Paris, he described the Great Bull Elephant as charming but very strict, and told how the entire Matabele population listened to him.

He compared the Matabele chief to another powerful ruler, Napoleon Bonaparte, who had waged war in faraway France. He said Mzilikazi seemed more stern and thirsty for territory than the French ruler.

Mzilikazi welcomed Pellissier and even spoke about letting him work among the Matabele. Pellissier soon realised that Mzilikazi was more eager to learn how to use firearms than to build a church.

After some time, Pellissier tried to return to Mosega and he glimpsed something of the powerful ruler’s authority when Mzilikazi said he alone would decide when the missionary would leave. Mzilikazi put Pellissier to work cleaning a stack of firearms that the Matabele had taken from the Griqua at the Battle of Moordkop. Pellissier was eventually allowed to leave, returning to Mosega as quickly as his wagon would go.

At Mosega, the tension between the Matabele and the Bahurutsi continued to grow. An incident happened a few months after Pellissier’s return, when the Bahurutsi found a troop of six Matabele warriors they thought were sent to spy on Mosega. They were taken to Chief Mokgatla and executed before the French missionaries could intervene. Pellissier knew the response from Mzilikazi would be quick and ruthless, and he was right.

In June that year, a convoy arrived at Mosega to demand that the missionaries return to enKungwini to see Mzilikazi. The missionaries guessed their journey would end badly, and decided to pack up their belongings and leave the Baharutsi and nearby Kuruman.

Moffat even offered to send a guide with them to enKungwini, but they still refused. Moffat sent a messenger to Mzilikazi, but, after the messenger’s disappearance and four months of silence, the message became clear: Mzilikazi had no intention of allowing the French missionaries to settle in Matabele country. Before Mzilikazi could march on the Bahurutsi in retaliation, he was attacked from the south by Dingane and his Zulu warriors. The clash ended in a stalemate, but both the Zulu and the Matabele held a victory dance after the battle. This was in spite of the retreat of the Zulus on the one hand and the severe losses suffered by the Matabele on the other.

After the battle, Mzilikazi was eager to continue with his plan of expanding into Bahurutsi territory. He was cautious, but, after a few months, gave his warriors orders to attack. At the same time, Mzilikazi decided to move his royal kraal further west into the Marico District. As they marched, the Matabele were surprised to find that the Bahurutsi territory was largely abandoned, so they were met with little resistance.

After securing the land from the fleeing Bahurutsi, Mzilikazi moved his royal kraal to Mosega. The women carried pots, sleeping mats and baskets, while the men drove herds of cattle to their new home. It was in this new place that Mzilikazi would encounter the battle that changed his life.

- Ask your nearest bookseller to order a copy if they do not stock the series, or contact the publishers at info@saheritagepublishers.co.za

- For a full list of titles in the series, visit saheritagepublishers.co.za

We live in a world where facts and fiction get blurred
In times of uncertainty you need journalism you can trust. For 14 free days, you can have access to a world of in-depth analyses, investigative journalism, top opinions and a range of features. Journalism strengthens democracy. Invest in the future today. Thereafter you will be billed R75 per month. You can cancel anytime and if you cancel within 14 days you won't be billed.
Subscribe to News24
Related Links
Book extract: Biko is beautiful
Know your nation: how much do you know about the Marula tree?
Next on Life
INTERVIEW | Act of Oblivion: Robert Harris on his new novel, about ‘the greatest manhunt of the 17th century’