Comic Planet Dovic 19, a collaboration between artists and scientists, addresses young adult experiences of the pandemic A local arts-based social enterprise has collaborated with some of the world’s most prestigious scientific organisations to address health and mental health issues faced by young adults in a ground-breaking and innovative way – through the medium of a sci-fi webcomic.

PLANET DIVOC-91 is a nine-part, sci-fi satire webcomic series focused around a fictional pandemic outbreak, which takes place in outer space. The series, which was inspired by the current COVID-19 pandemic, aims to empower young adults, and provide them with a platform where they can engage in conversations about their experiences and views on the Coronavirus, as well as other issues they face.

The comic follows the adventures of two earthlings: Sanda Oung, a 23-year-old girl from the UK, and Champo Oung, Sanda’s 19-year-old, non-binary sibling. In the series, 15% of the world’s population of 7.5 billion people are now stuck on another planet, miles from the safety of home. Sanda learns that humans have been brought to PLANET DIVOC-91 because the earth is at risk of an extinction level event – and young adults have been moved to safety by the Board of Adversity Scientists for Intergalactic Leadership’ (BASIL), led by a charismatic and fearsome alien named ADRO. 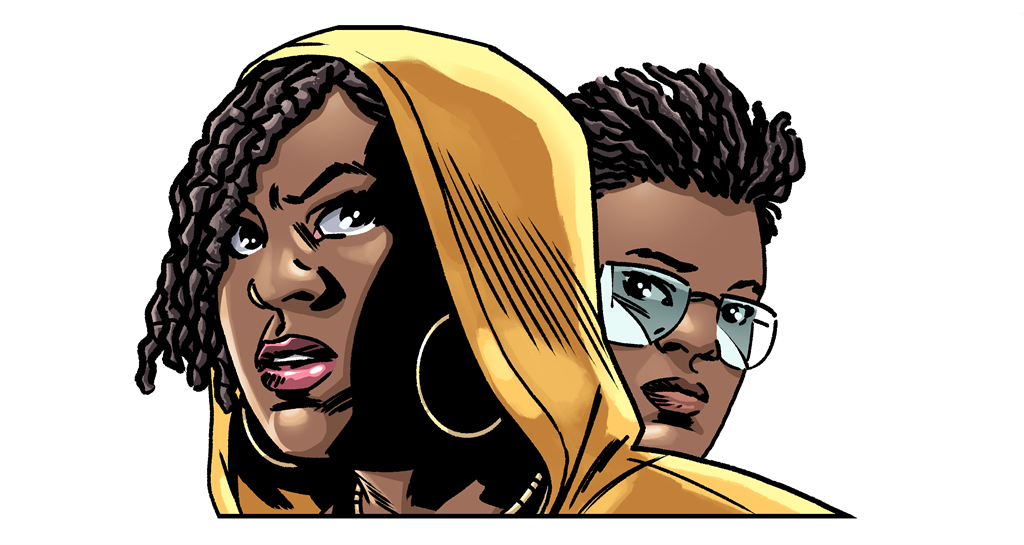 The series, which was inspired by the current COVID-19 pandemic, aims to empower young adults, and provide them with a platform where they can engage in conversations about their experiences and views on the Coronavirus, as well as other issues they face. (Photo: Supplied)

“The project is using visual storytelling to speak to young adults in a way that they can relate to and understand, talking about topics and sharing information that is often difficult for young people to engage with and relate to,” explains Nabeel Petersen, co-founder of the South African-based NPO, the Pivot Collective, and  Director of Interfer, a company focused on storytelling and research, which leads on the project.

Based in Kenilworth, Cape Town, Petersen works closely with young adults, using creative methods and storytelling to inspire and challenge research communities to think about the best ways of actively involving young adults in ongoing and future research.

“As well as helping young adults understand the world around them, this project will also share young peoples’ thoughts and views about pandemics, which will then be fed into future scientific research and policy. Seeing and understanding how young adults tackle the issues of a fictional pandemic can help scientists, doctors and governments around the world better understand how to respond to the very real coronavirus pandemic, and how to genuinely involve citizens voices in their responses,” he continues.

The webcomic was launched in July this year on WEBTOON, the largest webcomics community in the world. The series is interspersed with short articles, links to videos, and other pieces of art by young adults about issues related to COVID-19, merging the world of science and comics. The web-series explores themes of diversity and misinformation and the effects of a global pandemic on the mental health of the youth.

“I’m thrilled to be working on such a project. It’s in times like these that we all need to pull together and help, and, in my own little way, this is something I can feel useful in doing,” said Adlard.

Local creatives are also involved in bringing the series to life. South African singer gone global, Toya Delazy, is contributing an electronica mix to one chapter of the series; as are Cape Town based artists house/Gqom DJ, NV_Funk and electronic DJ, Angel Ho. Local visual artist and muralist, Mohamed Hassan AKA Fok, will be designing the cover of Chapter 6, which is written by Nabeel Petersen.

The project has since grown in scale and ambition, with a young editorial team from the UK, India and South Africa who interview experts, from scientists to historians, ethicists to anthropologists, and from that material, curate articles, creating art and videos in reaction to the interviews. Nabeel Petersen, co-founder of the South African-based NPO, the Pivot Collective, and Director of Interfer, a company focused on storytelling and research, which leads on the project. (Photo: Supplied)

Petersen got involved in the project after being approached by project producers, Sara Kenney (Wowbagger Productions) and Bella Starling (Vocal), in early 2020 to assist in putting out a call to young adults in Cape Town, offering them the opportunity to work on a project focused on reimagining research and creating art that challenged perceptions of mental health. That project has many similarities to the themes explored in the PLANET DIVOC-91 series and led to the current collaboration.

"I love the direction of the story, that the protagonists are black and that one sibling is non-binary. These are necessary segments of the story that we need to explore. We need to instil a pride in the stories we tell about being black or being a minority, and we absolutely need to challenge the way minorities are presented and “created” in creative media. Imagination and the freedom to dream are our first steps to realise the futures we all deserve,” explained Petersen.

“Although the topics we’re discussing in the series are incredibly serious, PLANET DIVOC-91 is full of humour and is occasionally ridiculous,” said Kenney. “We’re aiming for more of a District 9 or The Good Place feel than, say, Star Trek.”

“It has been such an awe-inspiring journey to join this project that involves the collaboration and cross-pollination of creative minds from different countries, backgrounds, cultures, generations and expertise, and to watch how all of these ideas are brought to life in a comic that most can relate to in these uncertain times,” says project coordinator, Adilah Petersen.

We live in a world where facts and fiction get blurred
In times of uncertainty you need journalism you can trust. For 14 free days, you can have access to a world of in-depth analyses, investigative journalism, top opinions and a range of features. Journalism strengthens democracy. Invest in the future today. Thereafter you will be billed R75 per month. You can cancel anytime and if you cancel within 14 days you won't be billed.
Subscribe to News24
Related Links
'They burnt down the market the day Vivek Oji died': An excerpt from The Death of Vivek Oji
So if feminism is African, then what's the Setswana word for it?
Do you know your Setswana feminist ABCs?
Next on Life
EXCERPT | ‘It would be foolish to label him too narrowly’ – Janet Smith on ‘disruptor’ Patrice Motsepe