EXTRACT | Reassessing Mandela: The Political and Private Marriage of Nelson and Winnie Mandela 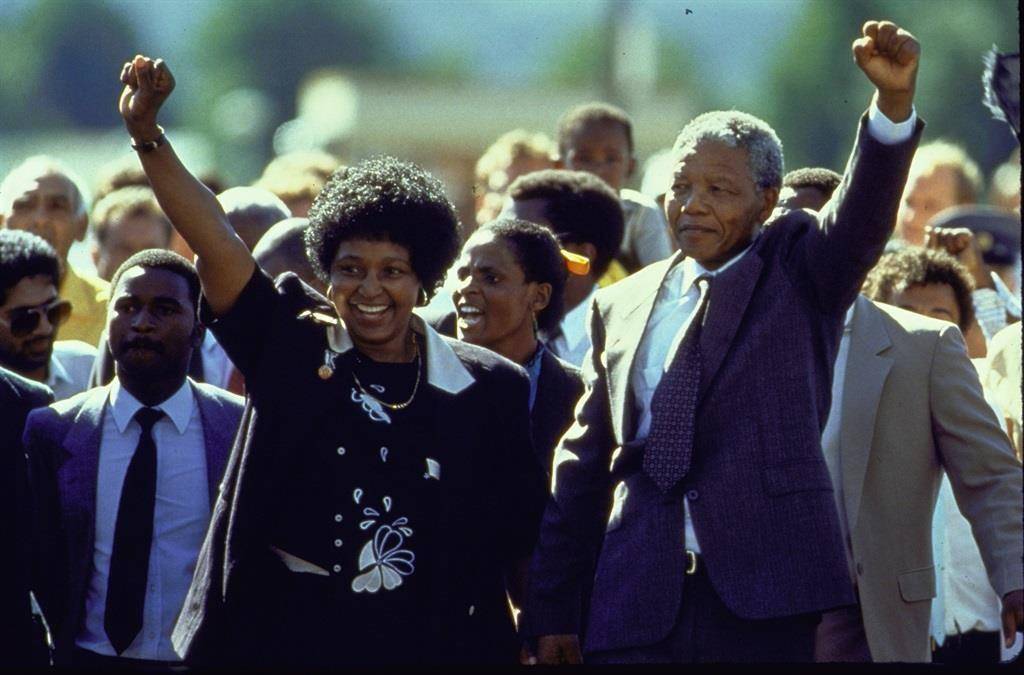 Nelson Mandela walks out of prison with his then wife Winnie Madikizela-Mandela .

Tom Lodge, Shireen Hassim an Thula Simpson have contributed to a collection called 'Reassessing Mandela', edited by William Beinart and Colin Bundy. The book examines Mandela's legacy which has become a matter of contention and dispute, especially among younger black South Africans. Here is an extract from the book written by Shireen Hassim examining the marriage of Mandela to Winnie Madikizela-Mandela and the role poltiical narration played in the relationship.

Nelson Mandela walked, slightly dazed, out of Victor Verster Prison on 11 February 1990, his hand clasping that of Winnie Mandela.

The photograph of that moment has become iconic: they look forward, bathed in sunshine, and walk together towards the excited and impatient crowd. It is an image of joy and hope, a fusion of the personal and political and a collapsing of the harsh struggles for liberation and the dreams of a new nation into a moment in the present.

It was impossible to miss the coupling of the narrative of the Mandela marriage, and the nationalist fusion of the people and its leaders. This was the end of a political era; formal apartheid would last no more than four years from this point, and its significance was not missed by the global audience.

The photograph’s promise was the end of suffering and the beginning of life. Yet, the birth of the new nation would also mark the beginning of the end of the marriage. Although it was not clear in 1990, Winnie and Nelson stood in different positions in this moment of hope, and their paths would diverge to represent two irreconcilable post-struggle idioms.

One would come to represent South Africa’s velvet revolution, built on compromise and reconciliation. The other would come to stand for a stalled revolution, one that promised a radical redress of injustices. The conjoined image of unity outside the gates of Victor Verster Prison promised an impossible contract, one that would not stand up to the expectations of the two protagonists at the heart of the marriage or to the hopeful nation watching their walk to freedom.

Nearly three decades later, the death of Winnie Madikizela- Mandela made the impossible contract painfully clear. Their deaths pitted them against each other in popular political discourse. The iconic Mandela marriage was a metaphor for a past that was deceptive.

Both partners had played a vital role in projecting a national image, but the death of Nelson five years before Winnie opened a new political narration of the marriage. Active as she had been in the making of the iconic partnership, Winnie Madikizela-Mandela, as the surviving partner, participated in the de-sanctification of Nelson Mandela (and of the reconciliatory path he represented). And in her death, her beatification by her supporters further diminished her former husband’s reputation.

This new discourse was not merely critical of the role of Nelson Mandela, but was also restorative, seeking to recast the nation in a new political moment by recourse to an already over-narrated marriage. Winnie Mandela was figured as the woman scorned by both her husband and the movement; Nelson Mandela’s decision to divorce her was treated as revelatory of his general weakness and untrustworthiness.

For young radicals in general, this discourse linked the Mandela divorce as metaphor for the betrayal of the pact between citizens and representatives, nothing less than an abandonment of a supposedly revolutionary path to the practical exigencies of negotiating a transition from apartheid. For queer and feminist youth, whose voices had been enabled by the open democratic spaces after apartheid, Winnie Madikizela-Mandela stood as a sign of the patriarchal nature of politics, and the Mandela divorce was reconstructed as a marker of the inability of Nelson Mandela (read: African National Congress [ANC]) to recognise radical women as legitimate political actors.

These immediate, viscerally charged responses provide kernels of insight into the nature of South African politics post-1994, but they flatten out personal relationships, hurts and betrayals into a simplified narrative. They reduce the personal into the political and the marriage into the nation – precisely reproducing some of the most heteronormative features of nationalism.

In the familialised national drama, mother was pitted against father, the authority of the father cast into doubt in favour of a maternal guarantee of revolutionary authenticity. The Mandela marriage was considerably more politically significant than simply a nationalist drama, and more meaningful than the focus on Nelson as the key partner would suggest. It was impossible for the marriage to escape the projections of nationalist fantasy, to be anything less than extraordinary.

Nelson Mandela was the son of chiefs, destined to be a leader.

Winnie, an unwanted girl, nevertheless had her father’s ambitions drummed into her alongside the teachings of her grandmother. Later, Winnie would claim to be a princess from the royal house of Mpondoland. Makhulu, the traditionalist, tried to stop Winnie from pursuing her dreams of education and a job and a life in the city, but her father, Columbus, clearly wanted upward mobility for his family, and Winnie was to be his main focus in the next generation. When Columbus decided that Winnie should study in Johannesburg rather than at the closer University of Fort Hare, her grandmother wailed ‘why does the child go at all, so much education already. Why doesn’t she remain at home?’ Columbus’s ambitions for his daughter, and Winnie’s determination, pushed aside the grandmother’s will. If Makhulu instilled a sense of history in Winnie, it was from Columbus that she derived ambition and a belief in destiny.

Both Columbus and his mother were attuned to the history of colonial dispossession. Bizana, in Mpondoland, had been annexed to the Cape Colony in 1894, less than a half century before Winnie’s birth, and memories of dispossession were still fresh. Makhulu was bitter about the confiscation of the family’s land and their trading post by white traders. ‘She taught us that these people of the other colour are thieves. All they are here for is to steal our land and our cattle [ ... ] I realized I was growing up in a blistering inferno of racial hatred’. Where white people were ‘curious and remote’ to the young Nelson, to young Winnie they represented the enemy.

From her father, Winnie learnt about the Xhosa wars against the colonisers, and later would imagine herself as picking up where her ancestors had failed: ‘If they failed in those nine Xhosa wars, I am one of them of them and I will start from where those Xhosas left off and get my land back.’

Taught by her grandmother that the source of black suffering was white power, her framing of politics was defined by the ways in which her family understood the relations of colonialism, and by their personal experiences of humiliation. As with many other ANC members with Eastern Cape roots, she did not think of urban struggles as the only space of resistance. She warned, in 1985, that ‘The white makes a mistake, thinking the tribal black is subservient and docile’. She retained the theme of land dispossession by colonialism, and that racism was central to dispossession, throughout her political career.

Winnie was only 17 when she took up a place to study social work at the Jan Hofmeyr School of Social Work, of which Nelson Mandela was a patron. She was rapidly integrated into modern city life, dressing in the latest fashions and participating wholeheartedly in college activities. She took part in sports – netball, javelin, shotput, softball – and learnt to defend herself. She was nicknamed ‘Lady Tarzan’ and the ‘Amazon Queen’ because she ‘solved problems the simple way, using physical force, as I had done way back in my childhood days when I had defended myself against older boys who came marauding into our mealie fields at harvest time’. She also discovered the Non-European Unity Movement possibly through her brother – and attended their meetings ‘in an obscure hall in Doornfontein’, but we do not know what she learnt or discussed at those meetings.

She saw aspects of urban life in her training that distressed her. She was an intern at the Salvation Army Delinquent Girls’ Home in Mthutuzeni, where she encountered a range of phenomena that she associated with urbanism and cultural dispossession: defiance against authority, identity crises, depression and anxiety. Social work training, she felt, was not as useful as sports in building rapport with the people she was working with. Later, she was intern at the Ncora Rural Centre in Tsolo, in the Transkei. There she met political leaders such as George Matanzima, an ANC member, and Dr Letlaka, who became a member of the Pan Africanist Congress (PAC) when it was founded. She was angry at political patriarchy.

I attended tribal meetings for the first time. Women were excluded from these, but I qualified, for though a woman, I was a social worker. KD Matanzima was the Chief of the Emigrant Tembu and the meetings were held at his great place, Qamata [ ... ]. The chief, lean, upright and aloof [ ...] addressed the tribesmen. I was impressed by his oratory, but noted his rigid, dictatorial manner. He did not consult his tribesmen, there was no discussion at these meetings.

Although she felt happy being back in a rural setting, she fled the Transkei when she heard that there was a plot by Chief Qaqauli to abduct her and marry her off to his son. She graduated in 1955 with her family present, and took up a position as a medical social worker – she may have been the first black person in this position – at Baragwanath Hospital.

Shireen Hassim is Canada 150 Research Chair in Gender and African Studies at Carleton University, Ottawa, and Visiting Professor, WiSER, University of the Witwatersrand. She has written and edited several books including 'No Shortcuts to Power: Women and Policymaking in Africa', and 'Go Home or Die Here: Violence, Xenophobia and the Politics of Difference in South Africa'. 'Women’s Organisations and Democracy: Contesting Authority'.

-That was an extract from a chapter written by Shireen Hassim in 'Reassessing Mandela', edited by William Beinart and Colin Bundy and published by Jacana.

We live in a world where facts and fiction get blurred
In times of uncertainty you need journalism you can trust. For 14 free days, you can have access to a world of in-depth analyses, investigative journalism, top opinions and a range of features. Journalism strengthens democracy. Invest in the future today. Thereafter you will be billed R75 per month. You can cancel anytime and if you cancel within 14 days you won't be billed.
Subscribe to News24
Related Links
Ralph Mathekga: If Mandela wasn't from among us, his legacy would be taken more seriously
Freed Nelson Mandela | 30 years on: The legend and his legacy
Next on Life
EXCERPT | ‘It would be foolish to label him too narrowly’ – Janet Smith on ‘disruptor’ Patrice Motsepe