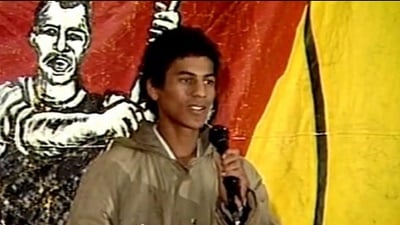 It was an unusually warm Friday afternoon in August 1988 when Shirley Gunn, wearing a sunhat, sunglasses and a dress she wouldn't normally be seen dead in, strolled casually into the Castle of Good Hope in the heart of Cape Town, carrying a limpet mine in a custard box.

At the time, the castle was the headquarters of the Western Cape Military Command from where the SA Defence Force fought Umkhonto we Sizwe (MK) rebels.

Gunn, commander of the Ashley Kriel Detachment of MK, was sent to plant the explosive in the castle. As a white woman, it was easy for her to get around undetected. After taking the bus from Clifton, where members of the detachment were staying in a flat, she first walked a turn past the Adderley Street flower sellers to make sure she wasn't being followed.

With a bunch of flowers she bought as an extra disguise, Gunn walked straight into the castle without a soldier batting an eye. There, she had a cup of tea while waiting for a group of construction workers to leave before she planted the mine in a strategic spot and left.

Back at the flat in Clifton they waited for the news. A massive blast had rocked the castle. No one was injured but the army was shocked and embarrassed at the manner in which their military base had been infiltrated.

Gunn, currently director of the Human Rights Media Centre, is one of 18 members of the Ashley Kriel Detachment whose stories are captured in Voices from the Underground, a collection of essays from each on their involvement in the armed struggle.

The detachment, named after one of their slain comrades, conducted more than 30 operations between late 1987 and early 1990, effectively fighting a guerrilla war against the apartheid regime.

On Thursday night the remaining members and 260 members of the public gathered in the Ashley Kriel hall in Salt River, Cape Town, to celebrate the launch of the book, which took Gunn and her co-editor, Shanil Haricharan, six years to complete. Each person's account was recorded orally and later written down.

Retired Constitutional Court Justice Albie Sachs, who facilitated the night's conversation with the two editors, said everything about the occasion was extraordinary.

The book traces the journeys of the various members into MK, via student activism, trade unions, religious organisations and UDF politics. It details their training in exile, their experiences of detention and interrogation and what democracy has been like for them. For many of them, it has not been an altogether happy ending.

"When I think of the sacrifices comrades made in the struggle… they put the future into the hands of a generation that betrayed us," said Haricharan, who was also a unit commander of the detachment and is currently a senior lecturer at the University of Cape Town's Nelson Mandela School of Public Governance.

"I've stopped focusing on the political noise. I don't read the papers anymore. I just do what I can do."

While Sachs described the book as a "riveting account of the life and deeds of idealistic young MK operatives", Gunn said she would never want to drop her ideals.

"This makes me disappointed a lot. There are many comrades that I stood shoulder to shoulder with that have become affluent who have forgotten where they've come from. I can say proudly that I've never abandoned my ideals."

Read more on:
umkhonto we sizwebooks