Home, I haven’t been back there in a while: A Micro Love Story 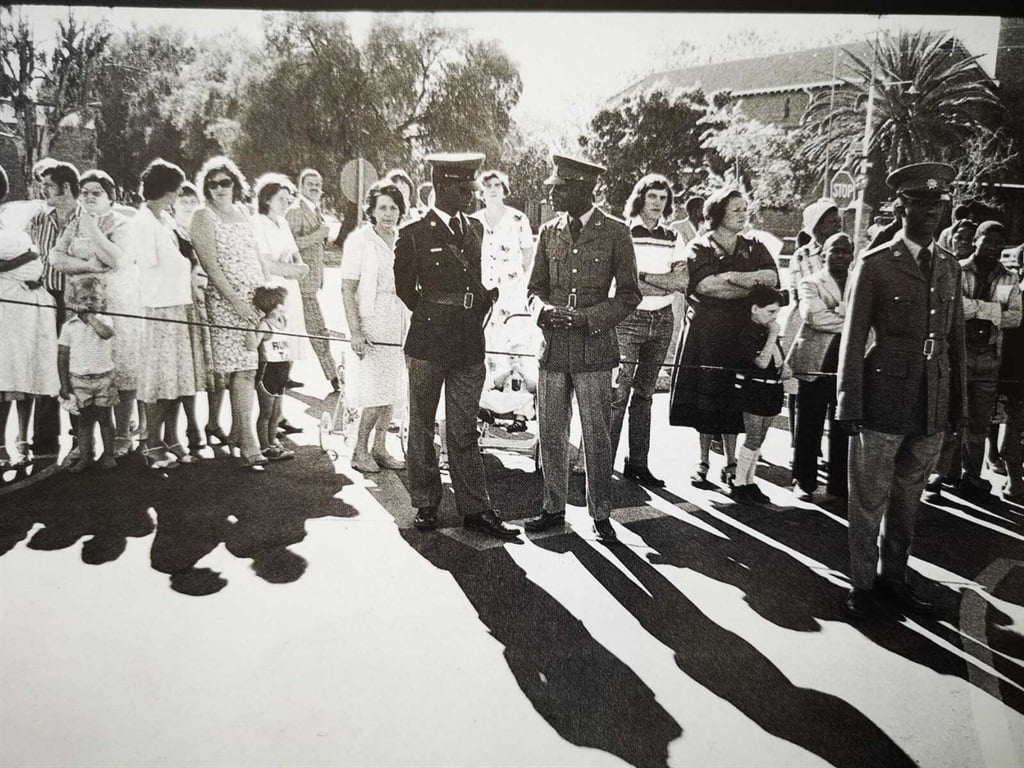 Spectators and Police during the incorporation of "Mafeking" into Bophuthatswana, 1980. Because it wasn't always a part of the homeland. During this ceremony the name was changed back to the original Mafikeng. (The Borders of Apartheid/ Paul Alberts)

Small love. Big love. Skinny love. Toni Morrison’s “love is or love ain’t, thin love ain’t love at all”. Early in the morning love. Love and honour your parents love. Love at the ends of its tether. “I can’t do this anymore” love. Here Mpho Moshe considers Mahikeng.

Here’s a word. Mafficking. Rarely used and most likely unknown by many. Apparently it means “to celebrate boisterously in public” and perhaps unsurprisingly, this public display of joy happened in London, in the month of May, in the year 1900 - marking the end of 217 days of a siege where the British and the native Batswana were trapped by the Afrikaner during a segment of the Anglo-Boer War.

Soon after or maybe years later, what was Mafikeng became known as Mafeking, in part due to the ending of this siege one assumes. Later, Mafeking would become Mafikeng again and then, finally, Mahikeng. There really is no difference between the ‘f’ and the ‘h’, if you ask a Motswana. But here is a twist. In between this changing and tweaking of the name, and just before the dawn of what would be a constitutional democracy, the Afrikaner rolled into town once again – history repeating itself but this time with a little more complexity and uncomfortable nuance.

This little place of boulders, Mafikeng, dry and unforgiving, I haven’t been back there in a while.

Mpho Moshe Matheolane is an art historian and Think Doctoral Fellow, working towards a PhD in Anthropology. His research involves the poetics of land and landscape, concerning an intersection of aesthetic and legal theory to better understand how people come to place meaning on land. Before this, Matheolane was an arts writer for the Mail& Guardian and has lectured in art history and visual culture at Rhodes University and University of Pretoria. He is doting father in practice, an arts advisor when he feels like it and a writer and photographer when he makes the time.

We live in a world where facts and fiction get blurred
In times of uncertainty you need journalism you can trust. For 14 free days, you can have access to a world of in-depth analyses, investigative journalism, top opinions and a range of features. Journalism strengthens democracy. Invest in the future today. Thereafter you will be billed R75 per month. You can cancel anytime and if you cancel within 14 days you won't be billed.
Subscribe to News24
Related Links
I May Destroy Everything: Problematising revenge rape in popular TV series
Sometimes Sol Rachilo gets lonely. But his ‘pen still navigates with ease’
On why love is not a poetical or pontifical matter, but a political one
Next on Life
REVIEW | Emma Donoghue’s Haven: Gripping tale of monks on a mission

Read more on:
mafikengmore than one kind of lovelove