Jacques Pauw looks into Moyane's back story, and why Zuma appointed him as SARS head 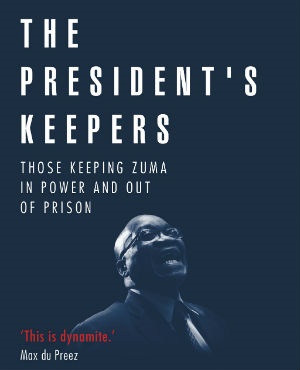 On 23 September 2014, Thomas Moyane became Zuma's choice for commissioner of SARS, one of the most crucial government positions in the country.

An online document called "They Were Part of Us and We Were Part of Them: The ANC in Mozambique from 1976 to 1990" by Nadja Manghezi gives a fascinating insight into Moyane's earlier life. The author referred to him as Tommy Ndhlela, which was his nom de plume in the ANC. The surname belongs to his mother.

He was born in Soweto in 1953 and was bright and ambitious. After passing matric, he worked as a clerk and got a bursary to study economics at Turfloop University, today the University of Limpopo.

When Soweto erupted in June 1976 and the university was closed, he returned to Soweto. The air was thick with tear gas and the smell of burning tyres. He joined the protesting students and was arrested and taken to Jabulani police station.

Said an activist: "Tommy was beaten unconscious as they pushed his head against the table. We were beaten up, humiliated. Then we were taken to common law prisoners' cells, not awaiting trialists' cells. The idea was that we were going to be sodomized."

They got bail of R500 each and decided to skip the country. Moyane wanted to go to Mozambique, where his father was born and lived before coming to work on the mines. Moyane said about his time in Mozambique: "Here I was on my own, in a country I knew nothing about. The language was foreign. The money and the manner of dressing was completely alien. They seemed completely, you know, bundu type, rural, backward."

Zuma arranged for Moyane to join a group of 20 South African students studying at the Eduardo Mondlane University in Maputo. He was the only one who passed and was employed at the Cashew Nut State Secretariat.

The rest were sent to Tanzania to become soldiers. Moyane and his new wife, Zola, lived in a flat on one of the top floors of a Maputo building. It was next to an army installation. ANC comrades in Maputo were not allowed to be armed, but Moyane and his wife had an AK-47 assault rifle, a Makarov pistol and two hand grenades. He heard a noise one night and got up. The intruder ran away.

A night or two later, he heard a noise again. He got up with the AK in his hands. "I had never used a gun in my life except for training purposes. Comrades were killed in their houses in Lesotho, in Maseru, in Botswana, in Angola. And my body became very cold. I was shivering. I felt very cold.

Later that morning, Frelimo top brass arrived. They were concerned because the incident had happened next to army property. Moyane concocted a story that the intruder had arrived with the AK-47 and that he ambushed him with a kitchen knife. The gun fell, he picked it up and pulled the trigger.

When he later became South Africa's prisons commissioner, Moyane was reportedly the highest-paid director-general in the civil service. He was appointed on a five-year contract, but was told in 2013 that he had reached the retirement age of 60 and had to leave.

In August 2017, the Special Investigating Unit (SIU) announced that it will be probing a controversial multimillion-rand prisons fencing tender, awarded during Moyane's term. Among the allegations the SIU is investigating in connection with Moyane are the unlawful and improper conduct of state officials; the unlawful expenditure of public money; and serious maladministration.

Moyane scored serious brownie points with President Zuma when he took part in a four-person panel that investigated the landing of Jet Airways charter flight JAI9900 at Waterkloof Air Force Base in Pretoria in April 2013. The aircraft carried 217 guests who had been flown over from India by the Gupta family to attend the lavish nuptials of Vega Gupta at Sun City. Almost 200 government officials and 88 cars were used to receive the wedding guests and accompany them to Sun City.

Red carpets were rolled out for the arrival of the guests. Jacob Zuma was caught slap-bang in the centre of the controversy because of the abuse of state resources, and he hastily withdrew from attending the wedding reception.

Four top officials – including Moyane – from the justice, crime prevention and security cluster of government departments were appointed to investigate what became known as Guptagate. They heard evidence that the man who had masterminded a clearance certificate for the plane, chief of state protocol Bruce Koloane, claimed he was "under pressure from Number One". He said that the minister of transport was given instructions "by the president to assist the Gupta family".

Zuma was never interrogated but a Presidency official told the panel that Zuma knew nothing about the aeroplane or the landing arrangements. The panel accepted this at face value and confirmed Zuma's blamelessness.

The panel pointed at Koloane and a senior Air Force official for dereliction of their duties and found that their actions amounted to a security risk to the country.

Koloane was the fall guy to protect Zuma. The Department of International Relations charged him, he pleaded guilty and was demoted to a liaison officer. But there was no way of keeping a good man down. Just more than a year later, Koloane was appointed as South Africa's ambassador to the Netherlands.

The four-member panel that exonerated Number One were richly awarded with jammy jobs or a promise of easy money. Dennis Dhlomo, then acting director-general of the SSA, also got an ambassadorial post. Dr Clinton Swemmer, then acting coordinator of intelligence, is now political counsellor at South Africa's mission to the United Nations in Geneva, Switzerland.

Nonkululeko Sindane has since resigned from the justice ministry and become CEO at UWP Consulting, a black-owned company that thrives on state business. When announcing her appointment in 2016, UWP noted: "Her experience within the public infrastructure sector from where UWP

Consulting procures the majority of its work will be invaluable to the company going forward."

Let's face it. Moyane was hand-picked by the president to rein in an institution that, despite being lauded for its efficiency and independence, had become a threat to the hyenas that skulked in the echelons of power.

We live in a world where facts and fiction get blurred
In times of uncertainty you need journalism you can trust. For 14 free days, you can have access to a world of in-depth analyses, investigative journalism, top opinions and a range of features. Journalism strengthens democracy. Invest in the future today. Thereafter you will be billed R75 per month. You can cancel anytime and if you cancel within 14 days you won't be billed.
Subscribe to News24
Related Links
EXTRACT: The President's Keepers - how the Guptas tried to capture Johan Booysen
Next on Life
FIRST CHAPTER | ‘Born with skin the colour of mud’ – Elton Baatjies by Lester Walbrugh