Murder at Small Koppie: a kraal near Thaba 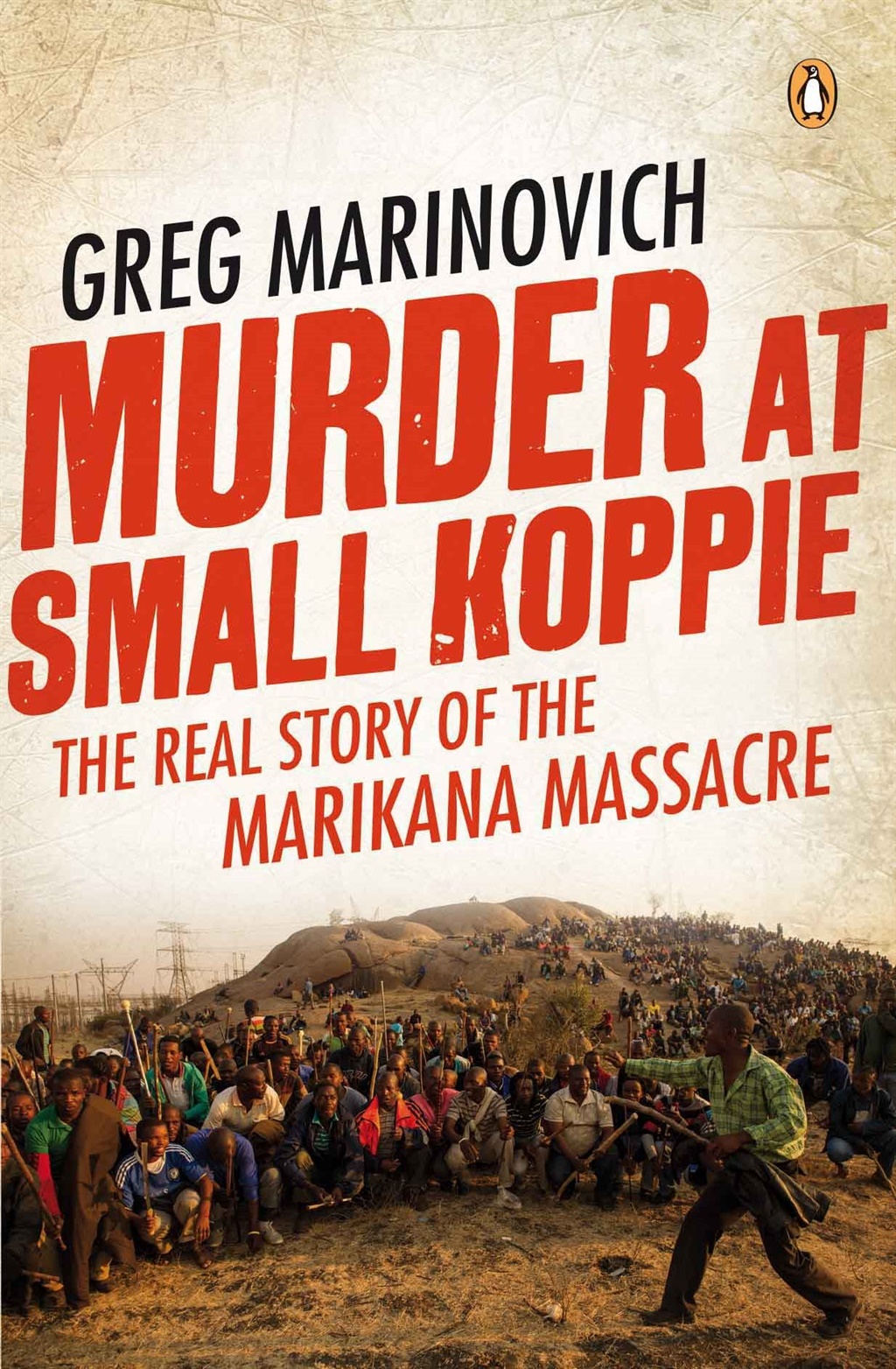 At 15:53:30, police fired the first stun grenade. It exploded with its distinctive double bang a third of the way from the front of Noki’s group.

It had the effect of splitting the group, sending the thirty-seven men in front of the explosion rushing forward and away from it, and causing those behind it to stop and turn.

Then the public order policemen in between the armoured vehicles to their left and rear opened fire with rubber bullets, forcing Noki and his group further down the funnel. Another stun grenade exploded above the heads of the miners and one of them lifted a pistol and fired a single shot towards the armoured vehicles.

Hidden out of sight behind the last Nyala, Papa 19, which had pulled across the neck of the funnel, were the feared amaBerete from the TRT with their distinctive dark-blue berets interspersed with some members wearing helmets. They lined up on the far side of the dirt track the miners were trying to reach.

A policeman stretched out his open hand to the side for the men to form a ‘basic line’ and then clenched his fist in front of him, the signal for them to hold the line. This line shut down the miners’ only escape route. The policemen cocked their R5 rifles.

The thirty-seven men were now moving in a crouch and covering their heads with their thick wool blankets and jackets for protection from the shotgun blasts. They accelerated as tear-gas canisters landed behind them. Police water cannons shot jets of water from the rear, reinforcing the effect of pushing the miners further into the funnel.

Confused and disoriented by the stun grenades, blinded by the tear gas and stung by the rubber rounds, many of them had their heads hidden under their blankets as they ran, and could only see the ground a few feet in front of them.

Some of the miners finally looked up and saw the line of tactical police ahead of them for the first time, and pressed ever closer to the thorn enclosure on their righthand side as they followed its curve. If they could get to the kraal entrance, they might run inside and escape the withering shotgun fire that continued to blast at them.

Then, from their left, some among the policemen in one of the last two armoured vehicles began to fire live rounds at them. Five men in that kraal-wall group were shot by birdshot pellets, one of them, Bonginkosi Yona, fatally. All of these pellet wounds were on the men’s left sides, showing that none had been a danger to the policemen firing the shotguns.

Despite the outlawing of live shotgun rounds such as birdshot or buckshot, some of the public order policemen in or around the armoured vehicles used this lethal ammunition at close range within the funnel.

A dozen metres ahead, Noki and the twelve men left with him made a headlong dash down the funnel, perhaps believing that once they cleared the last armoured vehicle they would have gained the road and escaped into Nkaneng.

Suddenly the Nyala, Papa 19, lurched out of the neck of the funnel, revealing the blue line of tactical policemen. It was also the first time that the police in the basic line could see the miners, who were running full tilt towards them.

From the policemen’s point of view, they were unsure of how many strikers were behind the lead men. The heavily armed men instinctively, nervously, took a step back and braced themselves, lifting their rifles.

Some of them had been involved in Monday’s clash, and the reckless bravery and savagery of the miners’ attack and murder of two policemen had unnerved them.

Some of the police undoubtedly also held traditional beliefs and would have at least entertained the thought that the miners’ intelezi had true power. Others among the police line were itching to avenge their fallen comrades. Then Brigadier Calitz’s voice crackled over the twoway radio – ‘Engage, engage, engage!’ – and the policemen opened fire, four of them with their R5s on full automatic mode, the rest firing sporadically. Others were shooting with their pistols. Some of the policemen fired at the ground before pointing directly at the miners, perhaps as warning shots, but others immediately began firing at head and torso height.

The first R5 was fired at 15:53:50 and, within three seconds, eight men were down, including Noki. After four seconds, a cloud of dust kicked up by the bullets veiled the scene, and by then all but three of the front group had been gunned down. The din of gunfire continued unabated.

Those among the rear group alongside the kraal wall who had survived the shotgun fusillade were hit by dozens of R5 rounds. One and then several police officers began to call for their colleagues to cease fire, but the fusillade continued for another eight seconds. Sporadic rifle and pistol fire continued for up to a minute.

Apart from the unknown policeman/men who fired the illegal shotgun rounds, forty-five policemen fired 328 live rounds, fatally shooting seventeen men. All but one of the dead men was shot in the head or the upper body.

Noki was hit by at least eight R5 bullets. He died instantly, his brain lacerated. The distinctive green blanket was still wrapped around his neck and shoulders as his corpse lay face down in the dirt, blood pooling from his head and neck wounds. Six other miners lay dead around him; the others were severely wounded.

Once the shots had finally died away and the dust began to settle, policemen pumped up with adrenaline edged forward in a semicircle, their weapons trained on the dead and wounded. They used their rifle barrels or boots to search under miners for guns or other weapons. One policeman gingerly pulled a pistol out from under a lifeless body with his thumb and forefinger, careful not to obliterate fingerprints.

Despite several of the wounded men being in terrible pain, none of the policemen offered even rudimentary first aid or comfort. When the gravely injured and obviously incapacitated Mongezeleli Ntenetya struggled to sit up, a policeman used his boot to shove him back down. It would be over an hour before the paramedics who had been on standby would attend to the wounded.

Had Ntenetya received assistance earlier, doctors estimate he would likely have survived. Four men were killed much further away, all shot with R5 rounds. Three of them died at the far side of the small kraal, between fifty and a hundred metres away from the shooters.

The fourth person shot at distance was twenty-seven-year-old Thembinkosi Gwelani. Gwelani was not even a miner, much less a striker. He had come to Marikana to seek work and had been taking food to his cousin who was at the koppie. He was 250 metres away from the police line when he was shot through the head.

The mass killing of these seventeen miners was witnessed and recorded by dozens of local and international journalists. Social media and radio were the first to report on the shooting, though the number of dead was underestimated. The horror of what had taken place was apparent only when footage of policemen gunning down striking miners was shown later that evening.

Viewers in living rooms around the country gasped and many began sobbing at the terrible visuals and sounds of a multitude of automatic rifles firing simultaneously as men dropped to the ground and were almost immediately shrouded in dust.

That video was captured by Reuters cameraman John ‘Dinky’ Mkhize, a veteran who had come of age covering the violent end of apartheid. The nation was transfixed by Mkhize’s footage; it evoked traumatic memories of a history of brutal policing, punctuated by massacres of civilians by state forces and different warring groups.

Brigadier Adriaan Calitz, the operational commander, was in one of those Nyalas and he would later describe the early part of the operation – the funnelling – as ‘the perfect block’. Surviving miners bitterly referred to it as the ‘trap gap’.