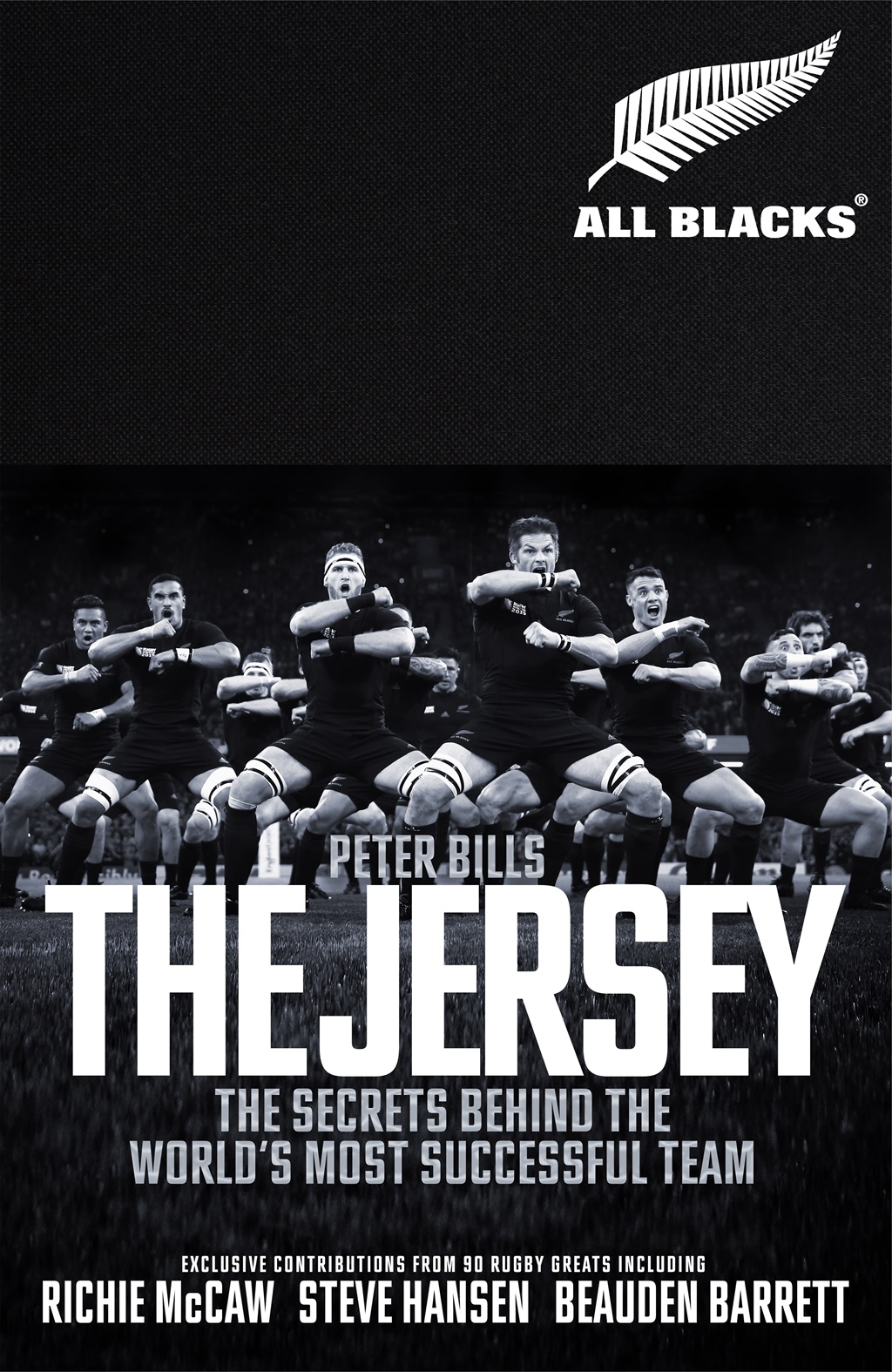 The Jersey: The Secrets behind the world's most successful team by Pan MacMillan.

There is one damaging consequence of New Zealand’s obsession with winning at rugby. At times, some of their leading players have gone too far in pursuit of their Holy Grail. Victory.

They have crossed the line that divides industry and effort from wanton violence on the field. The reputation of certain players and also of the national team has been damaged by such acts.

If we accept the premise that, in terms of the pursuit of excellence, New Zealand stands alone at the summit of world rugby, then it is surely beholden upon them to play in a manner that upholds the highest standards and traditions of the game. But alas, these occasional acts of violence and cheap tricks have, at times, demeaned both the national team and the game at large.

How best to define that desire to win and the fear of losing? A couple of Yanks nailed it in specifying the fine lines between the two. ‘I hate to lose more than I love to win,’ said US tennis star Jimmy Connors. And from Vince Lombardi? ‘Winning isn’t everything, but wanting to win is.’

Or as Richie McCaw said, ‘The big thing that really drove me was not having those off days. I didn’t consciously think of that at the start. But when I did think about it, I didn’t want to let that slip. The bad days hurt. Always. You remember them more than the days that were good. That is why we do what we do. Kiwis and All Blacks. We remember the worst days more than the good days. But that is what keeps you grounded. Keeps you going.’

No need for any psychologists. You won’t do better than that in trying to understand the motives of the wannabe winner. It helps us understand why some sportsmen will do anything to clamber onto that winner’s podium. It’s the craving for the drug of ambition. Swallow carefully. It is a potent poison…

The date is 15 June 1968. View through this prism the events unfolding at the famous Sydney Cricket Ground (SCG) in Australia. A New Zealand rugby team containing some legendary names, the likes of Tremain, Gray, Lochore, Laidlaw and Kirton, is confronting an Australian side captained by Ken Catchpole, then regarded as the finest half-?back in the world. There is another New Zealander, tough, physical, unsmiling, who offers a silent threat. He is Colin Meads.

Renowned as the hard man of the All Blacks pack. The hammer in the builder’s bag. The game is eight minutes into the second half and New Zealand are decisively ahead, 19–3.

Then Catchpole is caught and quickly becomes trapped in a pile of bodies, all attempting to seize the ball, but the diminutive Australian’s legs can be seen hanging out of the ruck.

According to the legendary book, Men in Black: 75 Years of New Zealand International Rugby by R.H. Chester and N.A.C. McMillan, ‘Catchpole was roughly dragged from a ruck by Meads causing asevere groin injury which necessitated his retiring on a stretcher. This injury was to end the brilliant half-?back’s international career.’

This bold statement is palpably short on two things. Compassion and indictment. This single act, by a man worshipped universally throughout New Zealand in both life and death as one of the greatest ever (if not the greatest) All Blacks, represents one of the worst, most brutal assaults ever perpetrated by a New Zealand rugby player. At the time, Meads said, ‘That’s the game. You do what you have to do.’

Catchpole embraced a rather different philosophy. He always said he played for the enjoyment of the game. Colin Meads’ philosophy was that you played to win. What Meads thought he ‘had to do’ was examined afterwards by Dick Tooth, the ex-Wallaby orthopaedic specialist.

He diagnosed Catchpole’s hamstring muscle had been completely torn from the pelvic bone. There were ripped and stretched groin muscles and a damaged sciatic nerve; he said it was the worst injury of its type he had ever seen.

Three months after the incident, Catchpole still could not touch his toes. He told friends the pain was terrible. It was an agonizing recovery and, thereafter, he was always troubled by a weak thigh. The instant acceleration, once the hallmark of his play, never returned.

As New Zealand Herald rugby writer Gregor Paul wrote in July 2017, ‘In the fifty years since Colin Meads was sent off at Murrayfield, the All Blacks winning narrative has been punctuated with a litany of incidents that would, in all objectivity, have reached the red card threshold.’

Paul noted the example of Wayne ‘Buck’ Shelford punching Welshman Huw Richards unconscious in the 1987 World Cup semi-?final. Richards, who had started the fracas, was ordered off when he eventually came round.

In 2012, All Blacks hooker Andrew Hore knocked out Welsh lock Bradley Davies. No action was taken at the time but when Hore was later cited, a disciplinary panel banned him for five weeks. As Paul wrote, ‘No red cards, though, and the All Blacks, if they are honest, will agree that they have ridden their luck to some extent in the last thirty years.’

But one of the worst assaults by New Zealand players on an opponent came in 2005, after only ninety seconds of the first Test match against the touring British & Irish Lions. The Lions captain Brian O’Driscoll was upended in a spear tackle, arguably the most dangerous in the game, by All Blacks captain Tana Umaga and hooker Keven Mealamu. He dislocated his shoulder and his tour was over – the Irishman didn’t play rugby for five months. The fact that it took the then International Rugby Board four months to condemn the assault – I won’t use the word ‘tackle’ – says everything about the vacuum in leadership of the game in those times.

By being driven head first into the ground, O’Driscoll could easily have broken his neck and been paralysed for life. It was a wilful, highly dangerous act. Ludicrously, neither player was even warned or carded, still less convicted of dangerous play. It took Mealamu twelve years to offer anything even approaching a mumbling apology.

Umaga has never gone that far. Yet former Ireland coach Eddie O’Sullivan believes some good did eventually come out of a very distasteful business. ‘The consequences of that O’Driscoll incident were that we are now ultra-?cautious about anything like a spear tackle. That changed the whole interpretation of the tip tackle.’

* This is an extract from The Jersey: The Secrets behind the World’s most successful Team by Peter Bills, published by Pan MacMillan. Bills is a world-renowned rugby journalist who has reported and written on the sport for more than 40 years for numerous different publications including The Independent.